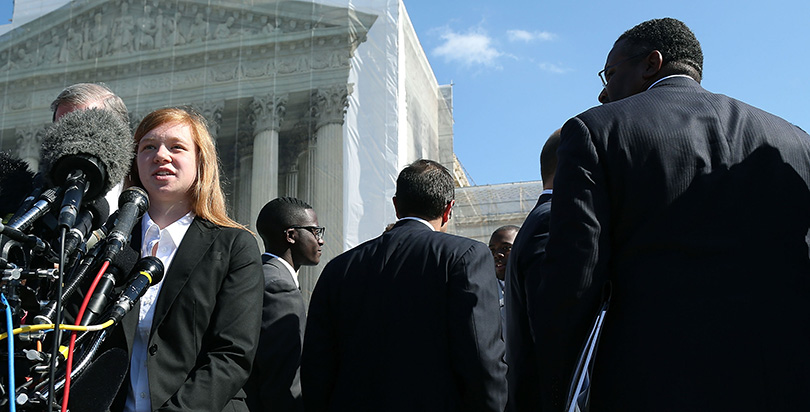 In a highly anticipated ruling that’s been years in the making, the U.S. Supreme Court on Thursday upheld a University of Texas affirmative action policy that takes race into consideration when selecting applicants — a ruling that could have a profound effect on America’s minority high school students planning to attend college.
After the decision was announced, civil rights leaders said the court’s opinion helps secure a fair shot at college for students from all backgrounds.
The Supreme Court’s 4-3 decision can help ensure that students who attend segregated K-12 schools have access to colleges and universities with diverse student populations, said Janai Nelson, associate director-counsel of the NAACP’s Legal Defense and Educational Fund.
“So many of our students encounter people of different races for the first time, and have the most meaningful interactions with people of different races and ethnic groups for the first time, in the college setting,” she said. “And so I think this is an encouraging statement for all students of all backgrounds that they still have a promise of an education that will be rich in diversity and rich in experience because of the continuing affirmance of the use of diversity in admissions.”
The University of Texas at Austin wound up in court when it denied admission in 2008 to Abigail Fisher, a white Texan who argued she wasn’t accepted because the university’s admission policy favored less-qualified minority applicants.
The suit followed a 2003 Supreme Court decision which held the University of Michigan Law School could use race as one factor among many in admissions decisions in order to achieve educational diversity on campus.
As required by state law, the University of Texas offers admission to all Texas students who graduate in the top 10 percent of their high school graduating class — which accounts for up to 75 percent of the university’s freshman class. For the remaining seats, applicants are considered through academic performance and a “personal achievement index,” which includes essays, leadership qualities, extracurricular activities, and socioeconomic status, among other factors. When admissions officials realized their race-neutral process was not bringing the desired diversity to campus, the university adopted an affirmative action policy in 2004.
Fisher, who has since graduated from Louisiana State University, was not among the top 10 percent of her graduating high school class. Her attorneys argued the 10 percent plan already ensured racial diversity.
In 2011, the U.S. Court of Appeals for the Fifth Circuit upheld the university’s admission policy. In 2013, the U.S. Supreme Court affirmed the educational importance of diversity on college campuses, but remanded the case to the Fifth Circuit for strict scrutiny review, a test to determine whether race was used for a compelling government interest and whether the law is narrowly tailored to achieve that interest in the least restrictive means.
In 2014, the lower court ruled the university’s admissions policy was narrowly tailored and the government had a compelling interest in the educational benefits of diversity on college campuses — sending the case back to the nation’s highest court.
“The Court’s affirmance of the University’s admissions policy today does not necessarily mean the University may rely on that same policy without refinement,” Justice Anthony Kennedy wrote in the majority opinion. “It is the University’s ongoing obligation to engage in constant deliberation and continued reflection regarding its admissions policies.”
In his dissent, Justice Samuel Alito Jr. argued the affirmative action policy benefited affluent minority students more than those from low-income backgrounds. He cited the university’s argument that the top 10 percent law captured minority students from “highly segregated, underfunded, and underperforming schools,” while missing more affluent minority students who attended “high-performing,” “majority white” high schools where they might not be in the top 10 percent. The affirmative action policy gave the University of Texas a way to admit those other minority students.
However, Kennedy wrote that admissions policies relying exclusively on class rank create “perverse incentives for applicants,” such as parents keeping their children in low-performing segregated schools where they have a better shot of graduating at the top of their class and discouraging students from taking more challenging classes that could drive down their GPA.
The case was decided by only seven justices because of Justice Antonin Scalia’s death in February and the recusal of Justice Elena Kagan, who was involved in the case as solicitor general.
Although a resolution in the Fisher case was a clear victory for those who support affirmative action in college admissions, the debate will likely continue. The Project on Fair Representation, which represented Fisher and is backed by Edward Blum of the American Enterprise Institute, has also filed suit against Harvard University and the University of North Carolina-Chapel Hill over admissions policies that consider race. Blum said in a news release the court’s opinion is a “sad step backward for the original, colorblind principles to our civil rights laws.”
The NAACP’s Nelson said Thursday’s ruling will allow college applicants to be considered as “a whole person.”
“Every characteristic that you bring to a university setting will be valued to some degree as admissions officers consider your application, that you do not have to be racially closeted, which could have been a sad consequence of this case had the court gone a different way,” Nelson said. “You can bring your full identity to the university setting, and that is certainly a sign of encouragement considering the increasing diversity in this nation.”
For Mee Moua, president and executive director of Asian Americans Advancing Justice, a civil rights group that promotes equity for Asian Americans, Thursday’s ruling ensures people from all racial and ethnic backgrounds can feel confident that their application is being considered fairly.
“I have a son who is a 10th-grader, and I think this case says to me that he should feel confident,” she said. “Parents who have children who are in K-12 systems from all racial and ethnic backgrounds should feel confident that this case reaffirms the kinds of principles and commitment to diversity and inclusion on college campuses.”
Submit a Letter to the Editor
June 23, 2016