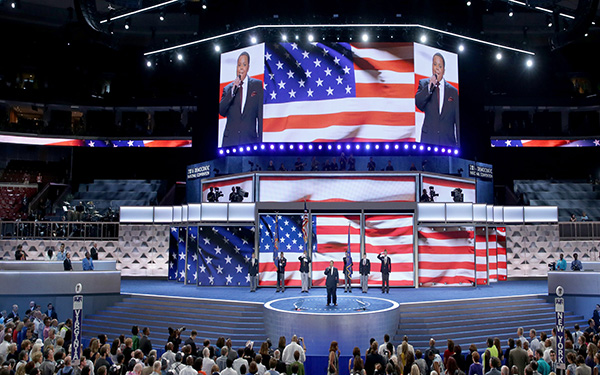 This originally appeared as part of The 74’s Democratic National Convention Live Blog, which was produced in partnership with Bellwether Education Partners. See our full DNC archive.

Philadelphia School Superintendent William R. Hite Jr. wants Hillary Clinton to tell Democrats to check their heads. To say to the country, in her speech accepting the party’s nomination on Thursday, that low expectations are a tragedy we can’t afford. It’s what he tells people everyday.

And given the fractures in America’s body politic this year, given the success of a presidential campaign that intoxicates voters on the idea of lost hopes, that makes disappointment a badge of honor, his concern seems sensible — if vague and better aimed at the other party’s divisive leader.

But Hite, who recently completed his fourth year as superintendent of the School District of Philadelphia, has children in mind. Poor children, in a city where 90 percent of the 130,000 district school students qualified for lunch assistance before the district began giving all children free lunch two years ago. (Full disclosure: I once worked for the district)

Philadelphia may surprise visiting delegates who don’t know it, or know it only from the movies. The gritty, working-class streets that Rocky Balboa memorialized in dirty sweats and black Chuck Taylors four decades ago are mostly gone. Center City, the downtown, is prosperous and energized; the jewel-like Old City, townhouse-lined squares that look like postcards turned real, and industrial and hardscrabble areas lately gentrified and culture-infused — all witness the city’s 21st-century renaissance.

The convention’s guidebooks sends Democrats to “5 Great Philly Coffee Spots,” on tours around the National Constitution Center and Liberty Bell and the city’s many museums, and recommends three “most instagramable spots (sic).”

None of these will take visitors near the north and west precincts where the city’s very large poor population lives. Philadelphia remains the poorest of the nation’s ten largest cities.The median household income in 2011 was $34,207, nearly one-third less than the national figure of $50,502. Even as Democrat rally around a vision for a better future this week, there are no easy answers for the nearly 40 percent of Philadelphia children who are poor, or the roughly 12 percent of residents who are deeply poor — families of three earning $10,000 or less. About 60,000 Philadelphia children live in deeply poor families.

Hite adheres to the reform precept that a student who doesn’t thrive has been failed by her school. He comes by the idea honestly: after a football career at Virginia Tech, he became a teacher, then principal, and quickly rose up the education ladder, landing in Prince George’s County, Maryland, first as deputy to reformist district head (and later Los Angeles schools chief) John Deasy, then succeeding Deasy as the top man.

Like Deasy, he attended the Broad Academy, a kind of West Point for education reform executives, but when he arrived in Philadelphia, summer 2012, to a massive budget crisis — precipitated as in other struggling districts by years of state funding cuts and gross inequities, charter growth, benefit costs, and years of fiscal mismanagement in the district — keeping school system open trumped policy.

Dozens of school closures, along with layoffs and austere budgets (Northeast High School had an extracurricular budget of $14,000, about $5 per student for the school year), have kept the district pulse beating, but Philadelphia remains riven by conflicts between charter proponents who want much faster growth and a community of educators and electeds that believes charters are yanking dollars from the poorest students’ hands (the state’s charter funding law punishes the district). “I would never advocate for one sector over the other when that sector cannot respond to the needs of all children,” Hite has said.

The district’s budget and charter difficulties are exacerbated by perennially unfriendly state Republicans, while its unilateral efforts to reduce health costs in the teachers contract has alienated labor supporters in one of the nation’s strongest union towns. And the consequences and debate about the state’s 2001 takeover of the District — Hite reports to a joint state/city board — continue to grow, 15 years later.

Attacked on the right and left, though almost universally liked — his hail-fellow-well-met manner and probity, and a courtliness that manifests in part in a seemingly endless closet of well turned-out suits and shirts — Hite has become a new type of school leader: the non-ideological radical, urgent, open to any solution that works, doubtful about real progress without a national change in culture.

He spoke with The 74 last week from his office in Philadelphia.

The 74: Why do you think there’s been almost no mention of education in the campaign?

Superintendent Hite: I’ve actually been talking about the absence of education conversation… Everyone watching what has actually happened over the last eight years maybe see it as too complex, too hard, and filled with political strife. I think that’s why you only hear the more general things that people think about as reform, like charter schools and choice. People feel like that’s the only safe place to be.

Although Hillary was booed when she mentioned charters to the National Education Association.

You’re right. What’s missing in this whole conversation is quality: how do we create high-quality schools irrespective of sector. And I do think the whole notion of choice and charters as the only solution [reflects], or speaks to, the type of disillusionment that we’re seeing with banks, Wall Street, government. You think of school districts — they think of bureaucracies.

It feels like the desire not to deal with complex things complexly has seeped into education more than it had five or ten years ago. Donald Trump shows everyday that a lot of people don’t want to think about actual solutions to life problems; they want magical thinking. Do you see that in the schools?

More people see that the work is hard. Charters that have begun taking on some of the most challenging areas in the city and more challenging and more at-risk populations — they’re either not meeting the academic outcomes that they agreed to or they’re handing them back to us. Young Scholars has handed back two charters to us. We have made recommendations to non-renew four other ones… So we made a recommendation [to close] four and two others have handed it back over. And then we approved still a third for this year and the people said we can’t do it, we don’t have the capacity to do this. So people are recognizing that this work is hard and this work is complex and challenging and it doesn’t happen overnight. And has not been happening overnight with even a charter.

Philadelphia, like almost every big city in the country, has been killed over the last few years in terms of funding. Do you have thoughts about how the country can fund public schools more effectively?

We’re still 800 million dollars down from where we would be if in fact there weren’t state cuts in funding for four years [ former Governor Tom Corbett cut school budget for four consecutive years]. And so even with additional revenue we’re still down 800 million dollars. If you think about revenues, you have to think two ways on this. One, the monies that are available for us to educate children — the revenues are always going to be a challenge because these costs are escalating, and the costs of running schools are escalating And then we have think just as they’re thinking at the national level with respect to all the federal monies that have some pretty stringent requirements associated with them — provide some flexibility for use of that money differently.

I still say we have to make the same investments in education around research that we do with the military or with medicine, and we don’t do that. We try a lot of stuff, the stuff doesn’t work, and then we cycle back through it a decade later adding a new wrinkle without the level of research. We need an NIH for education. I think that the department (of education) or the federal government should think about what is working and take a more empirical look at the data associated with it.

The other thing is, there has to be dedicated revenues streams for this stuff. Education has always been a target, and just as costs escalate to do everything else costs have escalated in education. I’m not just suggesting that we all need air conditioned climates, because school districts have to rethink how we do our work as well. How to pay labor, pensions, benefits, all of those institutional structures that cause costs to increase are very problematic for districts and those are fixed costs that have to get off the table first.

There’s some kind of disconnect between what people say they believe and the way political priorities have been constructed.

I’ll add a point to that. I’m not so sure if it’s a disconnect or the intent to dismantle. You could dismantle structures or systems in multiple ways. One is attacking them like a frontal attack. Another is creating a structure that disperses resources to multiple places and then systems are left to figure out how they’ll manage their legacy costs (costs of programs initiated by previous administrations).

House Minority Leader Nancy Pelosi calls and want to bring a group of congressional leaders to see two Philadelphia schools in action. Which would you choose and why?

They’re not a special admit (magnet). They take on all children, any children that are interested in that kind of school, and the children are doing incredible stuff.

For years schools didn’t do inquiry with poor kids because educators thought poor kids couldn’t do it, and it turns out that’s totally wrong.

If you could insert an idea into Hillary Clinton’s speech on Thursday, what would you have her say?

How could she help make that happen? What are your biggest needs: teacher training, classrooms resources, community engagement?

We need a mindset change. We need a mindset change around the ability of all children to achieve at high levels. We need everyone to have the belief in all children… We need that. We need sustaining corporate revenue because we need to insure that we can support the investments we’re making in schools this year five years from now. So that it’s not this thing of investing and then subtracting and then every three years you have to insert trauma into the equation because you’re laying off people, closing stuff, reducing stuff, eliminating stuff. Recurring sources of revenue become extremely important for us to continue our investment to provide school districts with what they need.