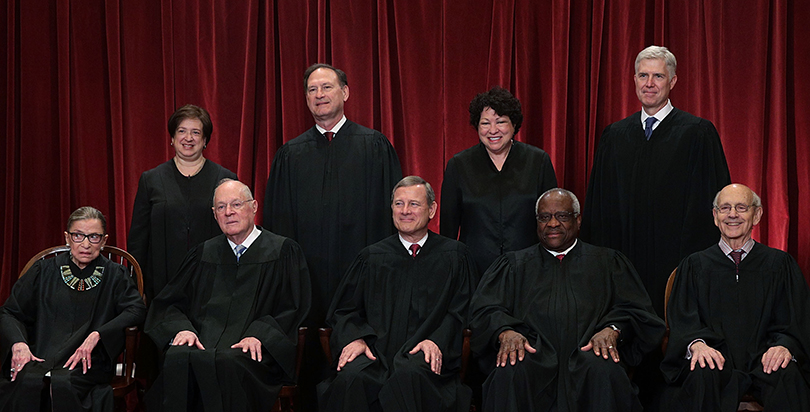 The U.S. Supreme Court will hand down the last of its decisions for the term Monday, among them a case involving a Missouri preschool that could carry major consequences for the Trump administration’s school choice agenda.
Trinity Lutheran v. Comer revolves around the state’s rejection of the preschool’s application to a public program that funds playground resurfacing using recycled tires. Officials cited a clause in Missouri’s constitution barring funding of religious institutions; the church said it was being illegally excluded from an otherwise neutral public benefit because it was religious.
Many state courts have blocked vouchers and education savings accounts, either temporarily or permanently, based on clauses in state constitutions, often known as Blaine amendments, outlawing government aid to religious institutions, including schools. The amendments exist in nearly 40 state constitutions.
Both President Donald Trump and Education Secretary Betsy DeVos strongly favor allowing public money to go toward tuition at private and religious schools. Trump’s 2018 budget proposes putting $250 million toward private school vouchers.
(The 74: Trinity Lutheran v. Comer — 7 Things to Know About a SCOTUS Preschool Case With Big School Choice Implications)
The issue of private school choice was not raised during oral arguments in April. The justices — including freshly confirmed Trump nominee Neil Gorsuch — focused instead on publicly funded programs that promote health and safety, a broadly acceptable reason for states to fund religious institutions, they suggested, while not advancing a religious purpose.
Justice Stephen Breyer repeatedly returned to the idea that it would be ridiculous — and likely unconstitutional — for a state to deny a church otherwise universally available police or fire protection or health programs like vaccines.
“How does [the Constitution] permit Missouri to deny money to the [church] for helping children not fall in the playground, cut their knees, get tetanus, break a leg, et cetera?” he asked. “What's the difference?”
Justices Sonia Sotomayor and Ruth Bader Ginsburg seemed to side with Missouri, sharply questioning the church’s argument that the state’s refusal to award it the playground resurfacing grant blocked its parishioners’ free exercise of religion.
Submit a Letter to the Editor
June 23, 2017