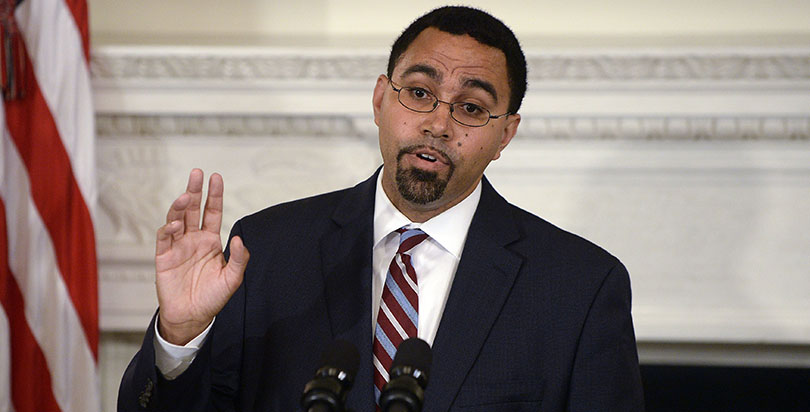 Among his first actions in the White House, President Trump on Wednesday called for sweeping policies to curb undocumented immigrants, which include constructing a Mexican border wall, withholding federal money to “sanctuary cities” and enhancing authority for border agents.

Notably missing from the president’s executive orders, however, was a repeal of Deferred Action for Childhood Arrivals (DACA), a policy created by President Barack Obama in 2012 to provide work authorization and freedom from deportation to undocumented immigrants who were brought to the United States as children. Still, amid fears the Trump administration will kill off DACA — his campaign website promised to “immediately terminate” the program — more than 1,700 education leaders from across the country have signed a petition calling on the president to leave DACA alone.

“We believe students brought to the U.S. as children must be able to pursue an education without the threat of deportation, and have a pathway to fully participate in American society as citizens,” says the petition, which was created by Stand for Children, a nonprofit education advocacy group. “To be clear, these are young people in whom we already have invested. They are part of our community, and as graduates they have the capacity to contribute to our economy and society.”

Though education policy often splits along ideological lines, the petition signals a moment of consensus for two sides that generally don’t get along. Along with superintendents from some of America’s largest school districts, signatories include leaders from charter schools, Teach for America and the American Federation of Teachers.

Last week, legislation was reintroduced in the Senate to temporarily protect more than 740,000 students from DACA’s uncertain future. The bill would grant DACA students — known as DREAMers — a three-year “provisional protected status.”

A comment by White House Press Secretary Sean Spicer, however, signaled that Trump might be backtracking from his aggressive stance on DACA. On Monday, Spicer said ending DACA is not among Trump’s priorities. Instead, he said, Trump intends to focus on undocumented immigrants who have criminal records “or pose a threat to the American people.”

As the fate of hundreds of thousands of students remains up in the air, here are the reasons that some of America’s top education leaders signed the Stand for Children petition:

“DACA has helped hundreds of thousand of young people pursue higher education, productive employment and a path to opportunity. DREAMers have attended K-12 schools here, are students across the nation’s higher-education campuses, are an integral part of our communities and the country’s economy, and will remain so. The country is best served by ensuring DACA students have access to opportunity.

“As educators, we stand up for our students — that is why so many education leaders have signed on to the petition. Any secretary of education, regardless of party, should work to advance the nation’s economic future by protecting DACA — and advocating for comprehensive immigration reform.”

“Since 2013, we have brought promising leaders with DACA status into classrooms where they’re most needed. The communities where we work and our country have benefited from the talent and commitment of more than 140 extraordinary individuals who were brought to the United States as children and have joined our leadership force. I remain hopeful that the administration will not rescind DACA protections and will work toward a long-term solution for DREAMers, including students in our classrooms who are undocumented. We believe that our DREAMer teachers should be able to teach and lead in their communities while pursuing pathways to citizenship. They are role models to the thousands of children they teach and to our nation at large.”

“For us to create a better future for all kids and communities, we have to ensure that our diversity continues to be our greatest strength as a nation. For many students who have been brought to this country as children, this is the only home they’ve known, and we believe that they should be able to get an excellent education — without the threat of deportation for themselves and their families — that will prepare them to contribute to the country they love. Additionally, the many educators who are DACA beneficiaries can serve as role models for students’ lifelong success as individuals who share the backgrounds of their students. It is our responsibility as advocates for kids to expand, not limit, opportunities for DREAMers.”

“Next year, we will be graduating our first-ever class of high school seniors. DACA is a critical piece to ensuring a path to success in college and the world beyond for all kids in our community and for our country.”

“While we can’t be certain at this point exactly what the new administration will do regarding DACA, what we do know for certain is how the recent election, and the rhetoric that accompanied it, has made Newark families feel. The DACA program and the DREAM Act proposal gave many immigrant families in our community a greater sense of stability and inclusion. With the election, many of these families and even some educators have expressed real fears about their future. Newark is a community where one out of every three residents is born in another country, and 25 percent of students speak Spanish as a primary language at home. These students and their families contribute immeasurably to our community. I signed this petition to let them know that we at Newark Public Schools stand with them and will do everything in our power to ensure that they continue to have access to a high-quality education here in Newark.”