What Economic Recovery? Analysis Finds Many States Spending Less on Schools Than Before Recession 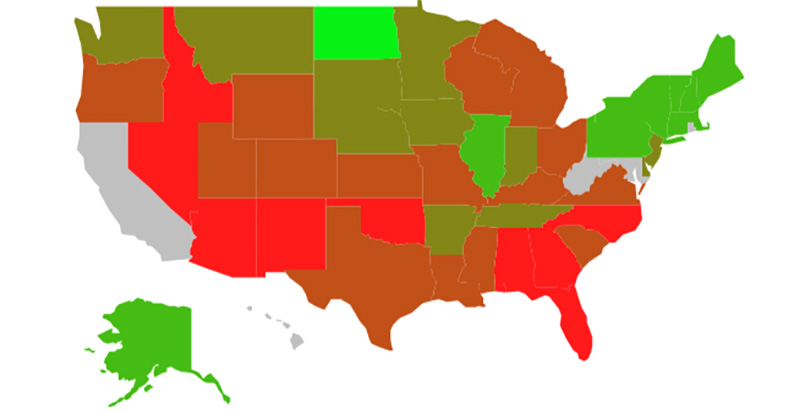 During the great recession, which economists say officially spanned 2007-2009, states sharply cut education spending — but now, nearly seven years later, they must have restored money to schools, right? Not so much.

A dramatic new report from the Center on Budget and Policy Priorities (CBPP), a left-of-center think tank, finds that a majority of states provided less funding per student in the 2013–2014 school year than in the years prior to the recession. Local funding and federal funding has generally not made up for this shortfall. According to the CBPP analysis, funding declines were dire in several states including Georgia, Arizona and Florida — all of which have reduced state and local education spending by more than 15 percent between 2008 and 2014.

The study arrives with a warning: “These cuts weaken schools’ capacity to develop the intelligence and creativity of the next generation of workers and entrepreneurs.” Research has found that a country’s economic growth is positively associated with its academic achievement.

The CBPP analysis says that as a result of the 2007–2009 great recession, states experienced sharp declines in tax revenue, shortfalls that were then passed on to schools in the form of severe budget cuts. The federal government stepped in to help schools, but that money largely dried up by 2011; in recent years other federal funding programs have shrunk, according to the report.

Meanwhile, localities have struggled to fill the shortfall as property values have fallen, limiting the ability of cities to increase revenue from property taxes, the main source of local money for schools.

In the 2013–14 school year, the latest year with data available, the CBPP finds that most states are still below 2008 funding levels. The picture does not change much when looking at state and local funding combined. (The report says there wasn’t necessary information available for California, Hawaii, Indiana, Maryland, Rhode Island, and West Virginia, which are excluded from the analysis.)

Data from the current school year finds that most states are increasing money towards their state funding formulas — but not enough to counteract earlier cuts. At the same time 12 states have continued to reduce education funding. Overall this trend has led districts to employ fewer teachers and other school employees — even while the number of students attending public schools has increased.

Exacerbating the issue is how education dollars are distributed. The report does not examine this question, but a recent study found that in many states affluent schools spend more than their high-poverty counterparts.

This research contributes to a long-running debate between school reformers who have generally argued that fundamental changes to the education system are more important than increased resources and traditional public education advocates who claim that more money will in fact improve schools.

Research has found that an infusion of resources can significantly increase students’ adult earnings and high-profile reform efforts in New York City and New Orleans have come alongside a significant uptick in school spending. Recently Teach Strong, a broad coalition focused on improving teacher quality, has advocated a slew of policies — such as increasing salaries, entry requirements and planning time for teachers — that would likely cost a great deal of money if implemented.

Oklahoma, for instance, is struggling with a significant teacher shortage crisis — perhaps in part because state and local funding has dropped by 10 percent.