What Did This Ohio Teacher Do During His Summer Vacation? He Rowed Across the Atlantic Ocean — and Set a World Record 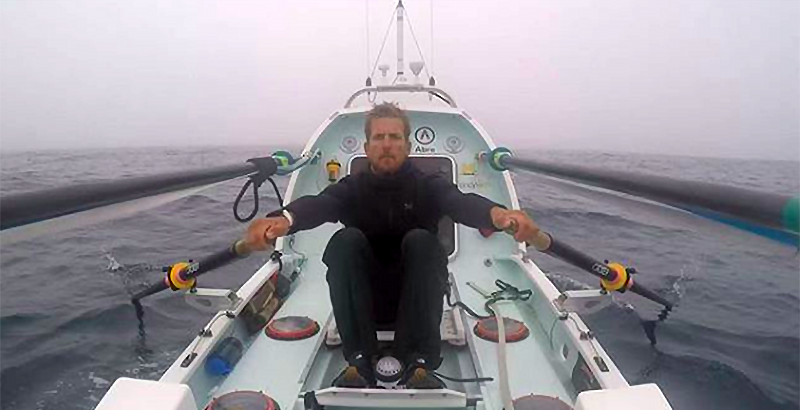 After you’ve spent part of your summer vacation rowing across the Atlantic Ocean, how do you go back to school?

With a pep rally, of course.

Last Friday, Cincinnati’s Seven Hills School celebrated AP biology teacher Bryce Carlson with cheers and high fives for his world-record-setting achievement — on Aug. 4, he became the first American to row across the North Atlantic when he came ashore in England’s Scilly Islands after 38 days, 6 hours, and 49 minutes, 15 days faster than the previous record.

He set off from Canada in June in the 20-foot, high-tech rowboat Lucille, named after his grandmother.

Carlson, who also runs ultra-marathons, decided to make the transatlantic trip “to have an adventure that would be exciting and that I would learn from and grow from and share with the world,” he told MLive.com.

That included posting live tracker positions on his website and many, many pictures from his seafaring science lab on social media.

Bryce was not alone today in the North Atlantic! He was able to capture about 5 min of video by placing his @GoPro in the water as his new friends checked out his boat. #brycerows #England #ocean #Dolphins #adventure #yolo #WorldRecord #oceanrowing #teacher #Athletics #rowing pic.twitter.com/SD7aZEVZZs

Over the last day, Bryce has experienced visits from Terry the Tern, rough weather (including two capsizes), and unexpected health difficulties. Visit https://t.co/2dzUAYsgtE for the latest news from the North Atlantic. #brycerows pic.twitter.com/7AlcSr9qNv

“That was really exciting for me to see whales and dolphins for the first time — to see bioluminescent plankton for the first time,” Carlson, a native of Muskegon, Michigan, told MLive.com. “To see my boat surrounded by a swarm of krill — the main dietary item of whales — I had been reading about those things since I was a kid. To be immersed in that for the first time was really special.”

His own diet consisted of water, energy drinks and bars, and dehydrated rations. He would start his day at 6 a.m. and row for 12 hours starting at 8 a.m., then rest for 12 hours. With no relief boat following him, he was without human companionship, but he kept in touch with friends and followers online and via satellite phone.

Lucille capsized — about a dozen times. Carlson’s water desalinator fizzled. Ocean spray flowed into his tomb-size hull, zapping his electronics. He lost 15 pounds during the journey.

But Carlson rowed on. And on. And more than 2,000 miles later, he arrived, knackered, as the British would say, in the port of the tidal rocky island of St. Mary’s Harbor in northeastern England.

Day 38: After three international flights and many hours of driving, Team Bryce has reached Cornwall! Bryce is about 56 miles away. He’s rowed 1,990 miles. We will update you as Bryce gets closer to shore with an estimated time of arrival. He plans on arriving between Saturday night and Sunday morning. We plan to provide live updates on Facebook. -Alex #cornwall #penzance @sandbarpraasands #praasands #rowing #ocean #atlantic #ocean #korev #beer #england #travel

Carlson went back to school last week a changed man — and with some life lessons for his students.

“All we need to get started in this game is curiosity.” Our Science teacher Bryce Carlson – Athlete shares hugs and high fives with students after addressing the student body during a pep rally to kick off the school year. #StingerPride

“I think there are expected challenges — the things you know going in are going to happen or are likely to happen — and you have a plan in place for how to prevent that or get around it or overcome it,” he told MLive.com. “Then there are the things that you didn’t expect. I think for me, the greatest anxiety came from the unknown.”