We Asked the Experts: 8 Common (but Worthless) Education Phrases That Are Banned in 2016 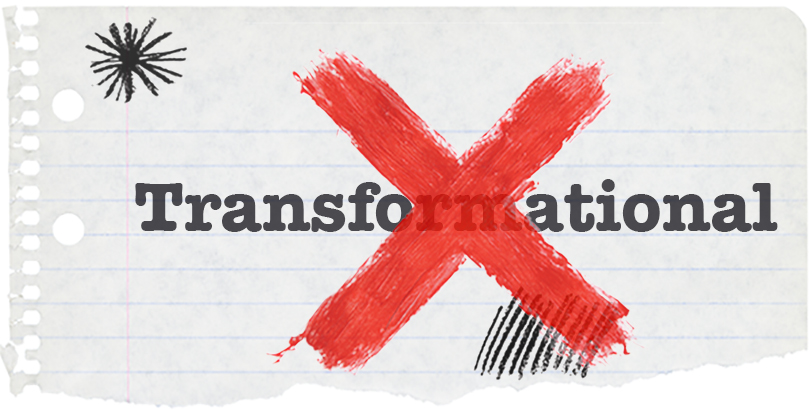 As the year draws to a close, now is a good time to consider what should be left behind in 2015 — a New Year’s resolution in reverse so to speak. In that vein, I started considering what education words and phrases should be retired in 2015, because they’re vapid, overused, meaningless, or just plain wrong. I also reached out to several education advocates, journalists, and scholars for their nominees, many of whose initial response was, “Where do I begin?”

I got a variety of terrific suggestions, and some of the best ones — plus my own — are below:

Submitted by: Dana Goldstein, journalist and author of “The Teacher Wars”

“It's time to retire the phrase ‘college and career readiness.’ It has become a euphemism for ‘high standards,’ but using this jargon papers over some tough questions. First of all, to what extent is college readiness the same as career readiness? Sure, there are some skills that are crucial to both, such as getting information from texts, or learning to pose good questions and research their answers. But the truth is that Algebra II is not a requirement for many good jobs, even though it is a requirement for a four-year liberal arts college (and, increasingly, high school graduation, too). Some of the most rigorous learning I've seen has taken place at vocational high schools that help students earn professional certifications alongside a high school degree, though this isn't what the education community usually has in mind when it talks about getting states to commit to "college and career" standards like the Common Core.

“In fact, the focus on the Common Core, while important, has detracted attention from some of the other ways American education is unique compared to schooling in other affluent nations. We lack sophisticated apprenticeships or workplace-learning opportunities, which is one reason why American 18 to 25-year olds suffer from higher youth unemployment than young adults in places like Germany or Switzerland. In our constantly shifting economy, it would be dangerous to prepare teenagers to do just one narrow job. But even students at elite colleges would benefit from more structured exposure to the world of adult careers. Workplace learning builds social-emotional skills like collaboration, and helps students understand how classroom learning can apply to real life. Let's retire ‘college and career ready,’ and instead talk specifically about the types of experiences that will help students prepare for an economy that will require them to be lifelong learners.”

“I'd nominate the expression ‘data-driven,’ which increasingly is used as a seal of approval for  any decision or program that someone wants to peddle or defend, whatever its quality. If it's data-driven, it's got to be good. The expression  elevates data — typically quantitative data — over judgment, even when the data used are faulty, incomplete, or irrelevant to the decision at hand.

“Often in education, many factors must be weighed as teachers and administrators choose instructional programs, make moment-to-moment pedagogical choices, or design and interpret assessments. Such analysis is a professional responsibility that should not be shirked. Yet, the label ‘data-driven’ can lull us into believing that ‘experts’ have done all the important work for us. In fact, educators have both the right and the responsibility to make and to justify their own decisions, based on the best qualitative and quantitative information available.”

“Differentiation is a splendid notion — but it doesn't work at scale in truly heterogeneous classrooms. It’s akin to presenting a physician with two dozen patients who manifest different symptoms, differing degrees of illness, and, upon examination, many different ailments. It’s unlikely that any one doctor can do a great job with all of them, especially when strapped for time and resources. He’s apt to engage in a form of triage, focusing mainly on those he can readily help and giving less attention to the mildly ill. The sickest may be sent to the hospital and others referred to appropriate specialists. Teachers, however, are expected to be all things to (almost) all youngsters. Few, at least in the United States, have had much training in effective strategies for meeting this challenge. And most of those with whom we have spoken admit that, while technology and small classes surely help, they don’t often feel that they’re meeting it well. Some accept the premise of differentiation but then — triage style — pitch much of their instruction to kids in the middle of the achievement/ability/motivation distribution, doing less for pupils who are either lagging far behind or capable of surging ahead.”

“Transformational leadership may have once been a revolutionary theory among academics to describe a management style that inspires employees to produce extraordinary results as opposed to ruling over them with an iron fist. Education insiders took note of the concept and ran with it, sprinkling the term in everything from major policy initiatives to more foundation reports. These days, the term is bandied about so often it's lost its punch. Let's agree to give the phrase a rest and get back to discussing specific strategies to improve leadership of our schools.”

“So the Maya were not critical thinkers? This term perpetuates the idea that you can teach such skills directly. In reality, even 3-year-olds can engage in critical thinking. What they lack is knowledge, not some thinking skill.“

“Almost anything could work, but whether it actually does in a certain setting often comes down to local context and implementation. This applies to a whole host of education interventions, like charters or pre-k or teacher prep. Basically any time someone inserts the phrase ‘high-quality _____,’ what they mean is that the implementation must look exactly like they have in their minds or else it won't "work."

“Education policy is too often made based on ‘best practices’ that are little more than theory or anecdotes. My favorite example of this is in teacher prep, where everyone seems to have a magic cure for ‘what works,’ like longer clinical placements or higher entry standards or additional content requirements, but none of these provide any guarantees for whether someone will actually be a good teacher. Worse, these ‘best practices’ often get codified in policy, so then we have other places trying to replicate someone else's intervention using rules written on paper, even if we're not sure that intervention was effective in the first place!”

“These terms are not very useful because quite few people have actually been punished through standardized tests over the last decade. Very few teachers have been fired because of poor student test results, school sanctions under NCLB were mostly quite weak, if they were applied at all, and the large majority of state tests have no stakes for students whatsoever. To be sure, some tests are actually high-stakes (e.g., graduation exams for students), but as compared to the stakes attached to standardized tests in many other countries, most of our tests are quite low- (or even no-) stakes. So it's a convenient slogan and scare tactic that belies reality.”

And my pick, for the education phrase that should be banned from 2016:

The term is overused, underdefined, narrowly applied, and unnecessarily divisive. I don’t doubt that there are many schools out there that can improve, often significantly. But the failing school label is frequently glibly applied to any school with low English and math test score proficiency rates. Such scores, though, tell us little or nothing about the quality of the school because they don’t account for where students start at; they also focus too much on test scores, which are important, but don’t tell the whole story.

On a more personal note, I used to teach at a school that some would deem ‘failing.’ And indeed in many respects it could have improved. But the vast majority of teachers there worked our butts off and cared deeply about kids. Casting schools and educators as ‘failures’ only serves to alienate teachers without helping them get better.

So what’s your pick, for the education words, terms or phrase that should be stricken from the lexicon in 2016? Send it our way, at info@the74million.org. If we receive interesting suggestions, we’ll publish a second round in early January.

Educating Through the Pandemic: From Hawaii’s Push for In-Person Summer School to Arkansas’s Reopening ‘Playbook’, 8 New Ways Educators and States Are Looking to Adapt to COVID-19