Milwaukee, Wisconsin
Dr. Ben Carson really, really likes school choice.
“We consign a large number of our students who live in the wrong ZIP codes to failing schools,” said Carson, who is leading several polls for the Republican nomination for president.
The remedy for that, and seemingly nearly every problem in K-12 education, is school choice, he said repeatedly during an interview with The Seventy Four’s Editor-in-Chief Campbell Brown ahead of Tuesday night’s Republican debate in Milwaukee.
WATCH THE FULL BEN CARSON INTERVIEW:

“We know that the very best education is home school. The next is private school, the next is charter schools, and the last is public schools. If we want to change that dynamic, we have to offer some real competition to the public schools,” he said.
(See a brief summary of Carson’s education views on his presidential baseball card, and an overview of the higher ed issues that were briefly discussed at Tuesday’s debate)
Carson said as president he’d incentivize states to adopt new school choice programs, specifically voucher programs allowing parents to use tax dollars to pay for private school tuition.
He compared his incentive program to the Race to the Top program, which many conservatives say was one of the possibly illegal ways the Obama administration encouraged the adoption of the Common Core State Standards. Carson also said he would only use the “same dollars that we already use” to encourage states.
(There is already a federal grant program to aid the expansion and replication of high-performing charter schools. Eight states don’t have charter school laws at all, and few offer private school choice programs. During the ongoing debate on No Child Left Behind, legislators in Washington have debated whether and where to allow some federal money to follow children with arguments largely split on party lines.)
Like many of the most conservative Republicans, Carson doesn’t think there should be a federal role in ensuring school accountability. Even as civil rights groups make the case that federal oversight of school quality is a vital civil rights issue, Carson thinks school choice is the answer.
“I keep coming back to the same answer. When we have local control and choice, that problem takes care of itself because people will automatically migrate to the places where their kids are getting well educated, so that whole argument goes right out the window,” he said.
Carson said he’d start school choice programs with low-income families, with the goal to spread them to all children. He didn’t, however, have an answer for what to do at other schools, including even some in higher-income neighborhoods, that aren’t performing well.
“Unfortunately you can only do what you have the resources to do,” he said.
If the country eliminates policies that discourage capital investments and new business ventures, there will be plenty of income, “and then we have the ability to quickly spread the kind of choice that we need everywhere. So it’s all tied together,” he said.
Like many of his Republican competitors, Carson is also against the Common Core, saying he hopes it will “die a quiet death.” He dismissed the idea that a national move toward higher standards was needed after states lowered their standards in the wake of No Child Left Behind.
“I think the less federal interference the better. States will be able to set their own standards, work with their local school districts and work with parents and PTAs. I don’t see a downside in doing it that way. I see a big downside in imposing from above … So far it’s created nothing but chaos,” he said.
The 74’s Ben Carson Education Card (see the other candidates): 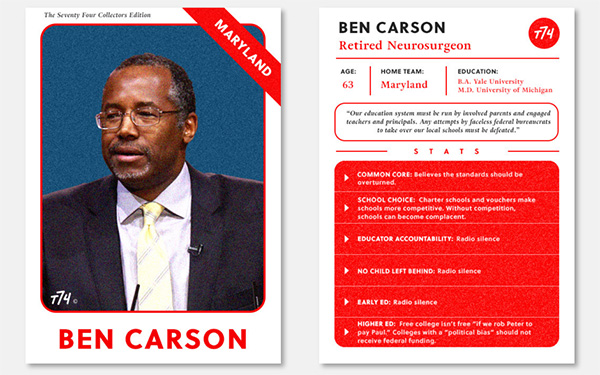 When Brown tried to quizz Carson on what he thought about the specifics of the No Child Left Behind rewrite now being debated in Congress, he offered only a vague response.
“Generally I don’t want any child left behind, of course. I don’t know of anybody who does, but I’m not sure that we have to nationalize this thing.”
For all his praise of local control, Carson also said property taxes aren’t the right way to fund schools. In 2014, he said the country should pool school funding and re-distribute it equitably, but in recent weeks walked back those comments, telling CNN he was talking specifically about funding for poor students.
“Education is not a local issue in the sense that the fabric of our country must be strong and the way we strengthen it is through having an educated populace,” he told The Seventy Four. “We need to look at the best way to make sure kids are well educated that is not based upon their ZIP code.”
Photo by Getty Images