WATCH: Teachers Go Back to School With Harry Potter — and It Works Magic on Their Students! 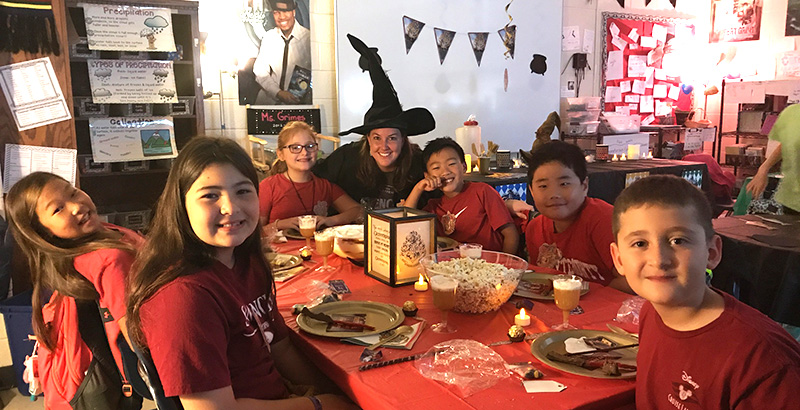 Students in Kristina Holmes's fourth grade gather for a Hogwarts feast after reading the first Harry Potter book together as part of their novel study. (Kristina Holmes)

Geometry is great, but for some reason, it never makes the list of favorite high school classes.

Arizona’s Mountain View High School math teacher Cathy Mahoney wanted to change that this year. So she spent the summer transfiguring her classroom into the most exciting story she knew: Harry Potter. She taped an 8-foot-wide Hogwarts castle to the wall to help students calculate slopes and angles. She added a math twist to her favorite inspirational Harry Potter quotes and hung them up. She put up knitted Hogwarts House banners, broomsticks, and a snowy white owl to make the bare walls feel a little more like home. 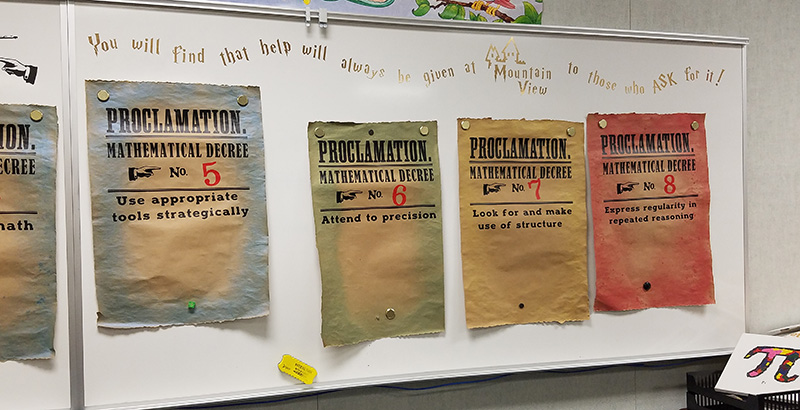 “You will find that help will always be given at Mountain View to those who ASK for it!” reads a quote adapted from the Harry Potter books in Cathy Mahoney’s classroom. (Cathy Mahoney)

A few weeks into the new school year, she got the highest praise of all. “Miss,” a student piped up, “at least your class is never boring.”

Mahoney is not the only teacher to bring the Harry Potter world into her classroom. Social media is flooded with beginning-of-the-school-year pictures of Harry Potter-themed classrooms. Though it’s been 20 years since the first book was published in the United States, teachers still find that J.K. Rowling’s series can drive everything from engagement, student behavior, and enthusiasm for much-loathed subjects to educators’ own excitement for a profession with a high burnout rate. 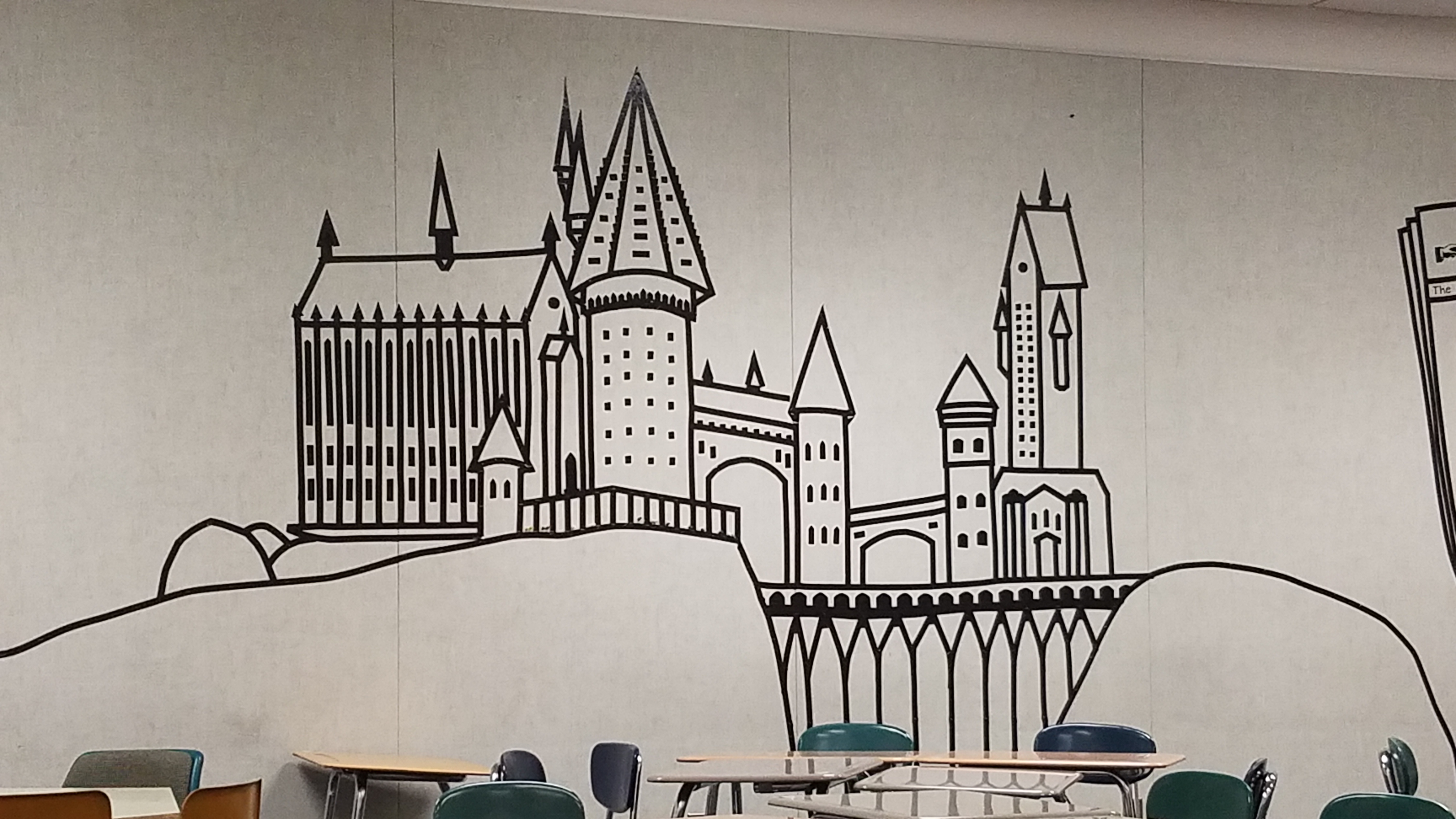 Arizona high school math teacher Cathy Mahoney taped the Hogwarts castle onto her wall, which her students will use to learn about calculating angles and slopes. (Cathy Mahoney)

“This has been the easiest start of the school year,” Mahoney said. “Freshmen … they’re these fabulous little people who are scared of high school. I think this year, it’s been a lot more calming for them because they know, ‘I have a teacher who likes Harry Potter.’”

The challenge for teachers at the beginning of every year is building rapport with new students. Kyle Hubler, a special education teacher at Evergreen Middle School in Oregon, chose Harry Potter as his room theme because of the way he had identified with the books as a middle school student. Hubler’s classroom decorations went viral last year, earning mentions in outlets like Entertainment Weekly, Cosmopolitan, and HuffPost, for the 70 hours he worked on them.

Hogwarts 2017-18!I got to reveal the classroom to my students yesterday and they loved it! Seeing their faces light up…

“I didn’t have as many issues with discipline, and it was because it wasn’t just me telling them I believed in them and wanted them to do well — they could see it on the walls, they could see my commitment and dedication to them,” Hubler said.

Teachers Jacy Douglas and Tracey Jones at Alabama’s Parkside School also returned to the Harry Potter theme this year after noticing what a difference their decorated classrooms had on student behavior last year.

“This is my 22nd year teaching — If I had known that changing my classroom and decorating it to not look like a classroom would have improved classroom discipline, I would have done this from the get-go,” Jones said.

The teachers decided to go a step further this year by decorating entire hallways over the summer. They raised funds to pay a muralist to paint the hallway with scenes of Diagon Alley, the Forbidden Forest, and the Hogwarts Express. Then they spent hours constructing bookshelves, hanging pictures, and installing a floor-to-ceiling Whomping Willow.

The middle school serves many students who come from difficult home lives, Douglas said — something Harry also struggles with. And even for those who don’t, middle school itself is a challenging time as students transition from children to teenagers. She hopes that the kids can relate to Harry and will find their decorated classrooms a safe, inviting space.

“If students can think of coming to class as an escape, that’s awesome,” she said.

At Sharon Elementary School in Georgia, the fourth-grade teachers this year are participating in a novel study of the first Harry Potter book, a curriculum created several years ago by teacher Kristina Holmes that aligns with fourth-grade standards. Holmes has been using Harry Potter and the Sorcerer’s Stone for 10 years now as a way to bring a challenging text to her students and get them excited about reading.

“They just become addicted to it, honestly,” said Holmes, who has seen students who didn’t like reading at first tackle the rest of the series after finishing the first book. “There’s no bounds on the impact I’ve seen Harry Potter have on the kids.”

The teachers read Harry Potter out loud as the students follow along, stopping as they point out particular vocabulary words and literary devices such as similes and foreshadowing. 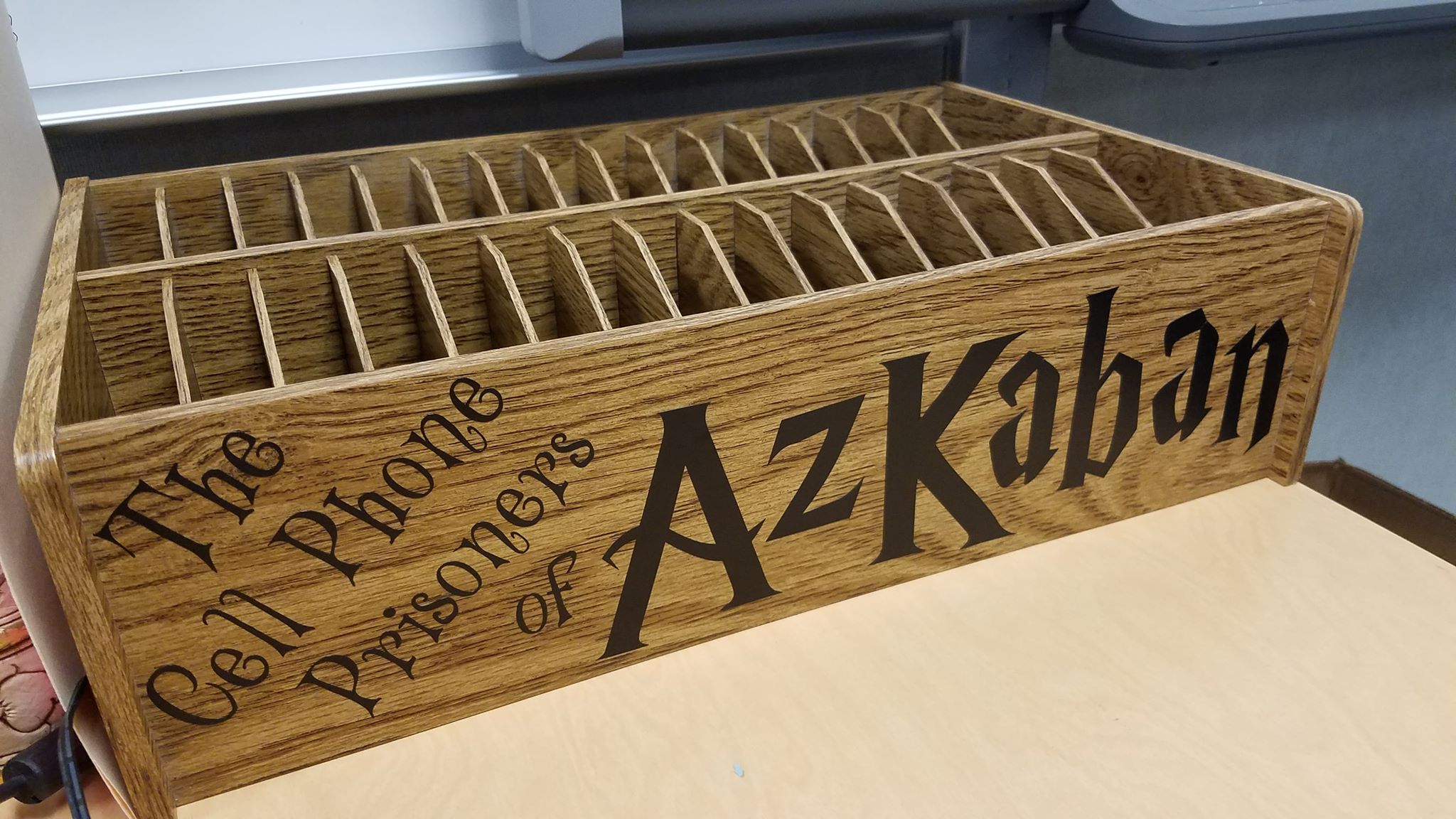 At the end of the unit, the teachers hold a surprise Hogwarts feast for the students. Teacher Kara Merck recently funded the books and decorations for the feast through DonorsChoose.org to help make the unit more memorable for her kids. It’s an experience she wishes she’d had as a student. “It’s kind of surreal,” said Merck, who remembers reading the Harry Potter books when she was her students’ age. “It’s fun to bring this book to life.”

Since the books were published, there has been some pushback from some parents who don’t want their children reading about witches and magic. Most teachers said they’ve received none, or only a few complaints, and that most parents come around after they see their children’s excitement about going to school.

After Hubler’s classroom went viral, he and his principal received some calls from across the country saying he should be fired for his decorations. Hubler did take them down after two months, but it wasn’t because of these complaints: He had seen comments on Facebook mentioning fire safety concerns, so he asked the fire marshal to come look at his classroom. He learned that no more than 10 percent of the walls could be covered. 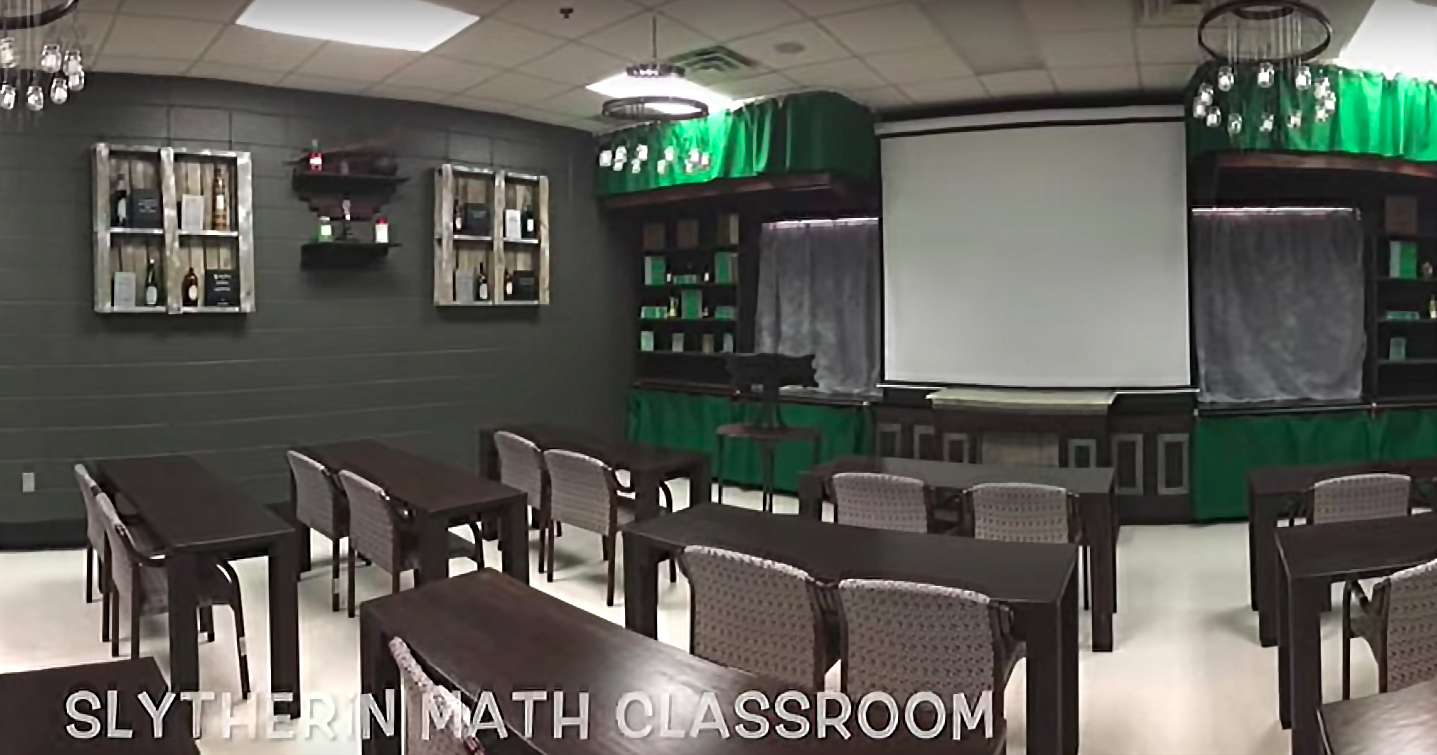 The math class at Parkside School was transformed into a Slytherin-themed room. (Jacy Douglas)

Rather than leave some of the decorations up, Huber decided to turn the situation around and let his students take ownership. “The idea struck me that we spent the first two months where I showed my personality,” Hubler said. “Let me give them an opportunity to share their personalities and interests.”

So the students made poster collages showing what they were passionate about — from Star Wars to Snapchat. When Hubler was teaching a math lesson, he would relate it to one of the student interests surrounding him on the walls.

This year, Hubler is decorating a corner of his room with a Harry Potter theme so he can introduce his students to the topic he’s passionate about, but he is going to leave the rest of the walls open for his middle schoolers to transform into whatever they love best.

Curriculum Case Study: How a Mid-Pandemic Shift to High-Quality, Evidence-Based Literacy Curriculum Helped Not Just Students — But Teachers, Too

Prioritizing Teacher Diversity: The Work to Make Our Classrooms Look Like the World Around Us Continues