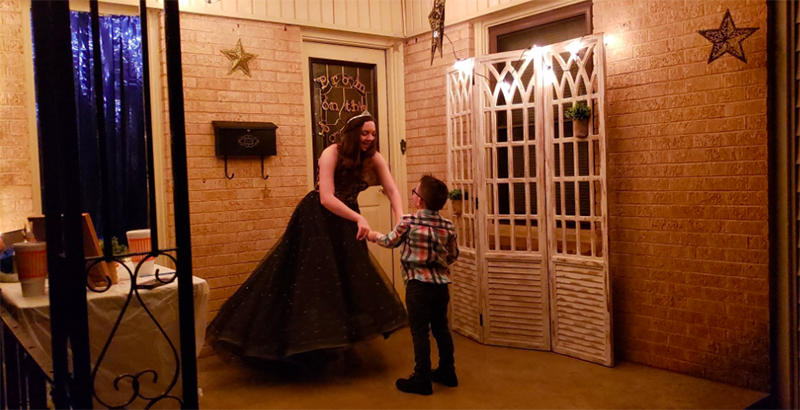 Whether they were among the 10,000 who attended a virtual prom hosted by MTV and Michelle Obama or celebrated by dressing up at home and dancing virtually with their friends, the Class of 2020 would not be denied a prom.

“I just put on my lamp upstairs so I could have some nice lighting,” Makinde La Veau, dancing in his dining room at his school’s virtual prom, told CNN. “I’m a senior. This is going to be my last prom, so I just want to make it fun.”

La Veau, a senior at Eastern Technical High School in Baltimore, clearly knows what to do when life gives him lemons.

“We’re still alive,” La Veau said. “Life is like this, so as long as I’m still here, I’m going to enjoy it to the fullest.”

In Sweetwater, Texas, Grayson Chapman’s mother wasn’t about to let her daughter graduate without a little prom fun.

“Grayson thought it sounded a little cheesy at first. But she was so excited to get to be able to dress up after all and go to her last ‘prom,’” Jaci Chapman told Fox News. “Once we started getting the porch decorated and cranked up the music, she really started getting into the spirit of it!”

What a Great Idea 💡 ! All you need now is #VirtualPromLive Rocking out on the front porch is way better than partying…

At Northwest High School in Jackson, Michigan, seniors Meg Moffitt and Chelsea Devolder made a video of their classmates wearing their prom dresses.

“We wanted to make something for girls to show their dresses,” Meg told JTV.TV, the school district’s video news channel. “Boys were invited, but we didn’t get any of those. We had about 35 or 36 girls, though, so it was a good turnout.”

Hannah Lucas, 18, a senior at South Forsyth High School in Forsyth County, Georgia, and her brother Charlie, 15, a freshman, created the “We Are Well Prom” to help seniors feel less alone, NBC reported.

ONE HOUR UNTIL PROM!!!!!!!!! Make sure to tune it to the “We Are Well; Virtual Prom" featuring @djjazzyjeff on IG LIVE TONIGHT @codeblacklife 9-11:30pm ET We are giving away over $45,000 in grant giveaways to students for #COVID19 Relief, mental health tips and resources • Mental Health awareness is so important for our generation and many are suffering now.  So lets dance for a good cause and celebrate together . • www.wearewellprom.com  #mentalhealthawarenessmonth  #wearewellprom  #Tag #Share

Congratulations to our #APSprom2020 royalty! 🤴 👸 👏 We thank all of the students who voted for their high school’s prom king and queen.

As for the prom Michelle Obama hosted, it was put on by MTV and When We All Vote, a nonprofit that aims to raise voter participation, People reported. Obama is co-chair of the group and wanted to ensure that COVID-19 doesn’t cause the 18-year-old virtual prom-goers to miss out on another rite of passage — voting in November.