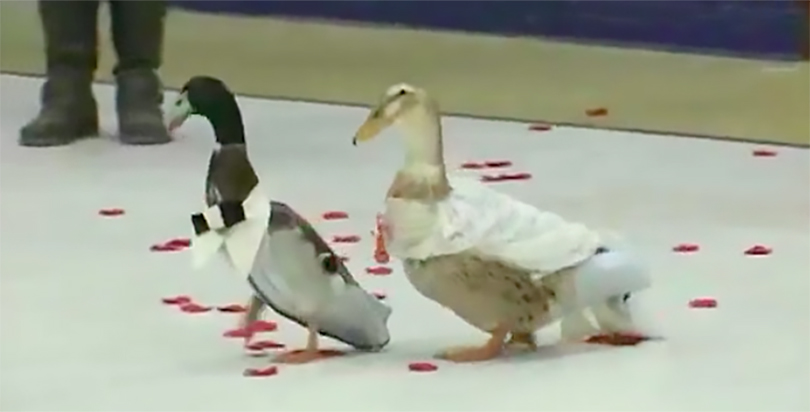 This article is one in a series at The 74 that profiles the heroes, victories, success stories, and random acts of kindness to be found at schools all across America. Read more of our recent inspiring profiles at The74million.org/series/inspiring.
You’ve never heard “Here Comes the Bride” quite like the students at Weston Elementary School in Manchester, N.H., perform it: in full quack.
As WWLP-TV reports, all went swimmingly last week as Plumpty and Pierre waddled down the aisle — he in a penguin-style duxedo, she in a white lace gown that matched her feathers — for a duck wedding planned and put on by the youngsters.
The children had watched the fowl pair hatch two years ago, part of a class project orchestrated by local volunteer Deb Ritchotte for Mrs. Hopey’s kindergarten class. Ever since, the ducks — one a silver appleyard and the other a Dutch hookbill — have made repeat appearances at the school, reports the Manchester Ink Link.
Finally, the students decided it was time for marriage. Love, it seems, has wings at Weston.

? It’s a nice day for a duck wedding: https://t.co/Ps7fak6frE pic.twitter.com/6eFnUzrJIN

The children planned and executed the entire affair. They decorated the gym and set up chairs, calmed the nervous bride and groom, orchestrated the playlist and planned the reception — which of course included the Chicken Dance — and wrote vows that included the all-important question: “Do you promise to share a nest and mealworms, and do you promise to keep each other warm in good times and bad?”
Principal Liz MacDonald presided, and a pair of ducklings provided by the local fire chief served as the flower duck and ring-bearer duck.

At the end, when MacDonald announced a final “conquackulations” for husband duck and wife duck, there was cause for much celebration. That really fit the bill!
Submit a Letter to the Editor
March 5, 2017