Washington, D.C.
Three or four dozen alumni have returned to their alma mater for graduation day — but it’s not a beloved college or even an iconic hometown high school that has brought them back on this Wednesday evening just before Memorial Day.
The men have made the pilgrimage to their middle school, the Washington Jesuit Academy, to celebrate the graduating eighth-graders who are the class of 2016.
The 18 graduates sit on stage in front of their beaming families, fidgeting a little in their matching khaki pants, slightly baggy blue blazers, green ties and very-early-stage mustaches.
The boys will join a fraternity of “men for others” who work hard and care for those who need help, school founder Bill Whitaker tells them and the audience.
“Everyone here is family. It’s real. It’s deep,” he said.
The Catholic school where Mass is said and religion taught is housed in what was once the site of the National Children’s Museum. It educates young men from the toughest neighborhoods in Washington, D.C. and Prince George’s County, Maryland, in fifth through eighth grade. The boys attend the academy 11 hours a day, 11 months a year, and upon graduation enroll in the city’s top private and parochial high schools. Ninety-nine percent are either enrolled in or have graduated from high school. Three-quarters go on to college. 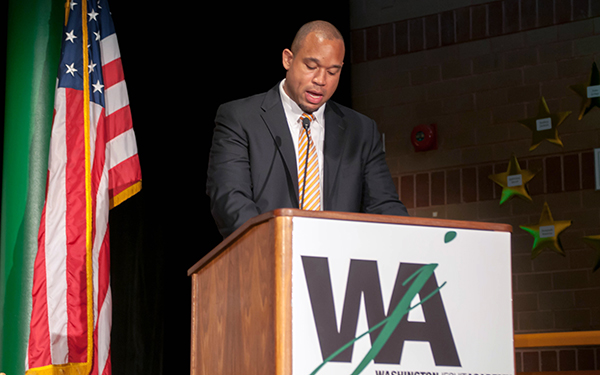