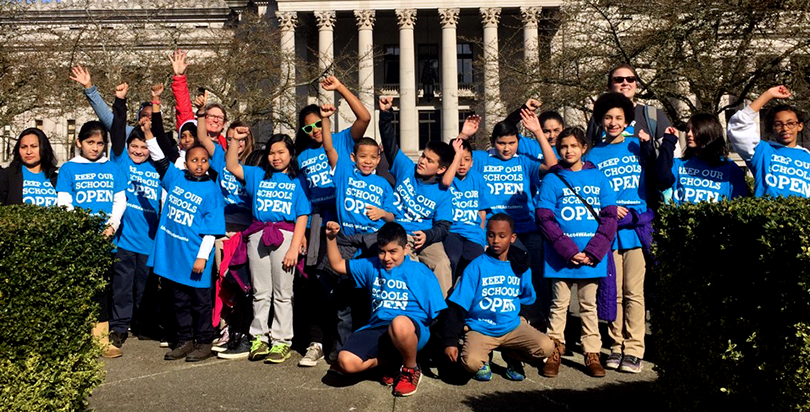 The Seventy Four reports on the Washington Supreme Court decision: Read our complete coverage
(Seattle, Washington) – Washington House Education members failed to act on a bill to save the state’s charter schools Thursday morning, leaving Democrats just days to scramble alternate legislation.
Their refusal to consider the bill came as charter supporters prepared for a 500-person rally on the capitol steps. There are some 1,100 students in the state’s eight charter schools, most of them low-income students of color, and they have been campaigning for months to keep the schools alive after the state Supreme Court ruled them unconstitutional in early September.
“We were disappointed that the House chose not to hear our bill,” said charter school parent Shirline Wilson. “It exacerbates our anxiety a little bit over what’s to come. We’re hopeful that there’s still time for representatives and senators to swing into action.”
The legislative sessions ends March 10. 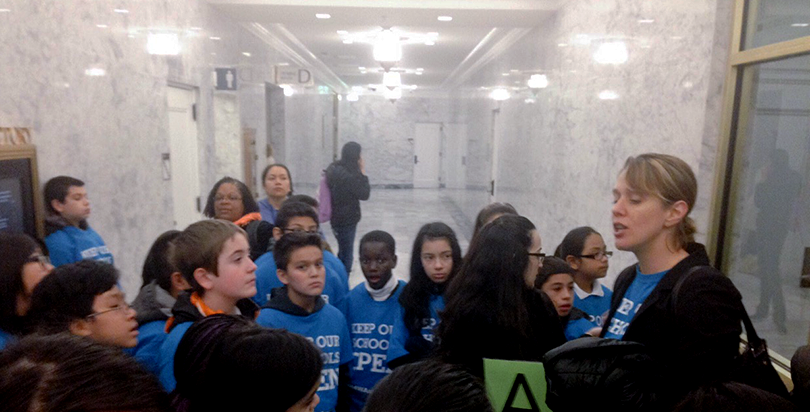 Students from Washington State charter schools rallied in Olympia Thursday afternoon after the House Education Committee rejected a bill to save their schools. (Photo courtesy Washington State Charter Schools Association)
The committee had initially removed the bill from its planned hearing during Thursday’s executive session, said Chair Rep. Sharon Tomiko Santos, D-Seattle, because a work group addressing the “problems inherent in the initiative” hadn’t produced any results.
However, Rep. Chad Magendanz, R-Issaquah, requested a roll-call vote to hear the bill, which required an 11-member majority to pass. Instead it tied 10-10 with Rep. Sam Hunt, D-Olympia, excused from voting. The vote was split fairly evenly along party lines, with Republicans in favor and Democrats opposed.
It was an unsettling setback to charter school parents, students, educators and advocates whose earlier trips to Olympia were followed by the Senate voting 27-20 last month to pass legislation preserving charter schools and shifting their funding source to state lottery revenues. That bill otherwise mirrored a statewide initiative approved by voters in 2012 calling for 40 charter schools to open across the state over the next five years and placing them under the authority of a state commission.
Rep. Larry Springer, D-Kirkland, was a co-sponsor of the pro-charter House companion bill, but voted no during Thursday’s roll call. He said he opposed the attempted circumvention of the procedural hearing and didn’t think the current bill was strong enough to withstand another lawsuit. The Washington Education Association, the state’s largest teachers union, and other parties successfully sued to disband charter schools.
“There’s a number of us looking at the bill who believe it does not address the issues around charter schools that are likely to be the basis of another lawsuit to overturn charter schools. If a second lawsuit is filed and prevails, the charter movement in the state is over,” Springer said. “We want to make sure (charter schools) don’t have to close their doors.”
A new bill sponsored by Springer and released Thursday afternoon, in title only, seeks to address how charters are overseen. Because charter schools are operated by the appointed state commission — and not a locally elected school board — the court ruled that they did not meet the definition of a common school under a 1909 state law and could not receive state education dollars. Critics say that setup means the schools are not held accountable to taxpayers.
But placing charter schools under the control of local school boards could make it nearly impossible for them to thrive, supporters said. That arrangement may work in places like Spokane where charter-friendly attitudes prevail but in less charter-friendly areas, their applications can easily be dismissed. Seattle was ranked one of the worst cities for school choice in a 2015 report by the Thomas B. Fordham Institute.
That’s why Springer said he’s searching for a sweet spot between local control and state level oversight although he could not be more specific.
Maggie Meyers, spokeswoman for the Washington State Charter Schools Association, said anything that doesn’t align with the Senate bill – the one the House Education Committee refused to hear — will fall short of keeping charter schools open.
“It’s certainly disappointing when members of the House aren’t voting in favor of what’s right for students but we know in Olympia that 15 days is enough time to get a solution in place,” Meyers said, as she directed hundreds of students dressed in blue shirts reading “Keep Our Schools Open” toward the capitol steps. “The urgency is dialed up a couple notches, and the kids here, they’ve become increasingly more aware of their rights.”
Legislators Eric Pettigrew, D-Seattle and Mark Mullet, D-Issaquah, told students at the noon rally  “to stay optimistic and believe in their right for an education.” In an earlier op-ed for The 74, Pettigrew said, “Across our state and all over the country, students of color are not making it in conventional public schools. Black and Latino students make up the largest number of dropouts, face harsher discipline, suffer from language barriers, and deal with the ever-present achievement gap… To combat this, I look for tools to help make changes, and public charter schools have proven to be effective.”
Mid-year data released by the Washington State Charter Association last week showed students on target to exceed grade-level benchmarks and outpacing national peers in math and reading. Most of these students began the year below grade level and generally African-American, Latino and Native American students in Washington state score between 15 to 20 percent lower on state assessments, according to advocates.
The effort to save charters has been led by Act Now for Washington Students, a well-financed coalition that includes Democrats for Education Reform and Stand for Children. It has involved multiple trips to Olympia to rally and testify at hearings; some 6,000 calls to legislators by parents and volunteers and gathering roughly 18,000 online supporters, according to the group
This week, Act Now said it made a six-figure media buy to air two, 30-second commercials featuring charter students asking  legislators, “Are you with us?” In December the group announced it planned to raise $500,000 for the re-election campaigns of pro-charter state lawmakers by the end of the session.
Springer said he’d like his bill to go through the procedural House committee hearings, but it’s not unheard of for proposed legislation to go directly to the floor for a vote, especially with so few days remaining in the session.
Submit a Letter to the Editor
February 25, 2016