Want Another Parent to Homeschool Your Child? Welcome to Georgia’s Homeschool Schools

When Rebecca Freitag picks up her seventh-grade son at school every day, he might talk about his social studies presentation on ancient Egypt or the math lesson he breezed through.
What he won’t be talking about are his classmates.
Freitag’s son is homeschooled. But it’s not his mother who does the teaching — it's Zahavah Stilman, another Georgia mom.
Stilman runs Toco Hills Home Tutoring from her home in Atlanta, charging about $500 a month in exchange for one-on-one lessons in subjects including math, reading, writing, history, science, art, music, and physical education.
Freitag is part of a growing movement of families who are choosing to educate their children through hybrid homeschools. For a fraction of the cost of an elite brick-and-mortar private school, these programs offer an alternative to traditional public schools — and allow parents who prefer to homeschool but work full time to give their kids the education they want without having to quit their jobs.
Georgia’s hybrid programs vary widely in size and formality, from parents who offer one-on-one teaching in their homes to operations that conduct regular classes, taught by certified teachers, in churches or office buildings. How many days a child spends in class is entirely up to the school and the family.
Georgia isn’t the only state that permits hybrid homeschooling — Alabama, Tennessee, and Texas, among others, also allow combination schools/tutoring services. But Georgia’s loose regulations have created a wide and diverse open market for hybrid home education programs.
Rachel Coleman, executive director of the Coalition for Responsible Home Education, told The 74 that Georgia has too little regulation of homeschooling to ensure a positive academic experience for every child.
“There should be some sort of accountability to make sure these kids are making progress,” she said.
But Freitag has seen definite benefits for her son.
“If you are in a classroom with 20 kids, there is an assignment and that’s what the assignment is,” she told The 74. “With Mrs. Stilman, she can tailor that assignment to really let him fly with his strengths.”
A popular choice, for many reasons
Of the estimated 1.76 million students in Georgia, about 61,158 are homeschooling this year, according to the state’s Department of Education. Nationally, the number of kids between the ages of 5 and 17 who were homeschooled increased from about 1 million in 2003 to 1.77 million in 2012, according to data from the National Center for Education Statistics.
For decades, conservative Christians who wanted to give their kids a faith-driven education and families who held anti-establishment views flocked to homeschooling to educate their kids outside the traditional public school system. Religious belief is still a significant factor in the decision to educate children at home, though data show it is declining.
These days, a much more diverse set of families is choosing to homeschool, and for many different reasons — failure of a child to thrive in a traditional classroom setting, dissatisfaction with the Common Core State Standards, a desire to flee the violence and underperformance of neighborhood schools.
“The rate of growth has been pretty phenomenal,” said Robert Kunzman, an education professor at Indiana University and managing director of the International Center for Home Education Research. “One of the generally accepted notions is that the movement has been broadening and diversifying in a general way, whereas, probably 15 years ago, conservative Christian homeschoolers were clearly the largest subgroup. And that may still be the case. I think there are a lot of different kinds of folks with different reasons [who are] homeschooling now.”
This booming trend could get an even bigger boost as more states, including Georgia, consider implementing education savings accounts that let parents use taxpayer dollars for their children’s education outside the traditional public schools.
(The 74: America’s School Choice Map: 5 Hot Spots for Vouchers, Savings Accounts and Tuition Tax Breaks)
New federal Secretary of Education Betsy DeVos has supported homeschooling as a choice that “puts parents back in charge of their kids’ education.” And the recent passage of the Every Student Succeeds Act gives greater autonomy to the states, which already vary greatly in their homeschooling requirements.
The Home School Legal Defense Association, an advocacy organization that supports reducing regulation of homeschooling, tracks legal developments in all 50 states. Eleven states don’t require parents to notify any state or local authority that they are homeschooling their child. The organization labels 16 states, including Georgia, as low-regulation states because they require notice from homeschooling parents, while 18 states and the District of Columbia are considered moderate-regulation states because families there must also provide test scores or other evidence of student progress.
Five states — New York, Pennsylvania, Vermont, Rhode Island, and Massachusetts — are classified as high-regulation states because they have additional requirements, such as a formal instruction plan including a syllabus and textbooks, home visits from certified teachers, curriculum approval by public school administrators, or state monitoring for academic progress. 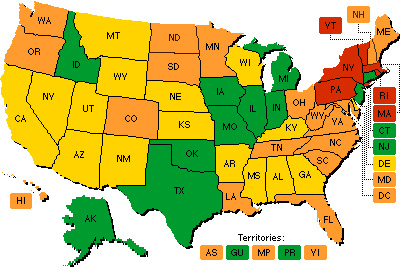 This map highlights homeschooling laws in each state. Green states require no notice from homeschooling parents, yellow states have “low regulation,” orange states have “moderate regulation,” and red states have “high regulation.”
Source: Home School Legal Defense Association
In Georgia, parents have to notify the state of their intent to provide their child with a “basic education” that includes math, English language arts, science, social studies, and reading, and make sure their child is taught for 180 days for at least 4½ hours a day. Parents, or the tutors they hire, need only a GED to homeschool.
Parents must also have their child assessed using a national test of their choosing every three years and write an annual progress report for each subject area, and they must retain those results and reports. But they don’t have to submit any documentation to their local school district or the state beyond an annual declaration of intent to homeschool.
(The 74: How Do You Monitor Homeschooling Parents? Welcome to the Wild West of Education Regulation)
“I think parents can be generally trusted,” said Daniel Beasley, a staff attorney for the association. “We think parents should be given broad freedom to tailor an education approach that meets the educational needs of each child.”
Different definitions of ‘school’
Toco Hills founder Stilman would agree. She started homeschooling more than 15 years ago, after her son came home from his private school with poor grades and complaints that he wasn’t happy in class. After sitting in on one of his classes and not liking what she saw, she dropped out of law school and began teaching him herself.
Later, she spent several years training in the Montessori method of teaching, which favors letting students discover concepts through experimentation over direct instruction, and turned her training and experience into a full-fledged business.
Most weeks, about four children come to her home at various times for one-on-one teaching, which might include a chemistry experiment in her makeshift home lab, private reading time, or an art project on the American presidents. Stilman opposes the Common Core and encourages kids to research and develop their own independent learning habits.
Most of the time, she said, the families she works with choose another option once their child reaches high school, and those students often go on to college.
“Any child I tutor, they are completely prepared,” said Stilman.
While Stilman’s operation works very much like a tutoring service, Tammy Bester’s is more like a school.
Bester, a certified teacher herself, began homeschooling her daughter after health complications caused the girl to suffer academically in second grade. Bester then founded Canton Homeschool Resources in Canton, Ga., to offer her daughter and other children in kindergarten through 12th grade a Christian and secular education in a small setting.
Most of Bester’s 100 students take classes — all taught by certified teachers — two or three days a week and complete assignments at home during the rest of the week.  The school administers the required exams and sends report cards home to parents.
Class sizes are kept between about 8 and 15 students. Most of the elementary grades are taught separately, but students in different grades may take electives together.
Bester and her teachers design the curriculum year to year, based on the needs of their student body. They often draw from popular Christian-based educational materials published by A Beka and BJU Press, as well as secular sources. Though the school is Christian, teachers stay away from controversial topics such as evolution and instead direct students to seek counsel from their parents, according to Bester.
After having to repeat the second grade, Bester’s daughter is now in eighth grade and surpassing grade level at Canton Homeschool Resources, Bester said.
“Every kid has different needs,” she said. “It’s just [about] finding what works best for each child individually.”