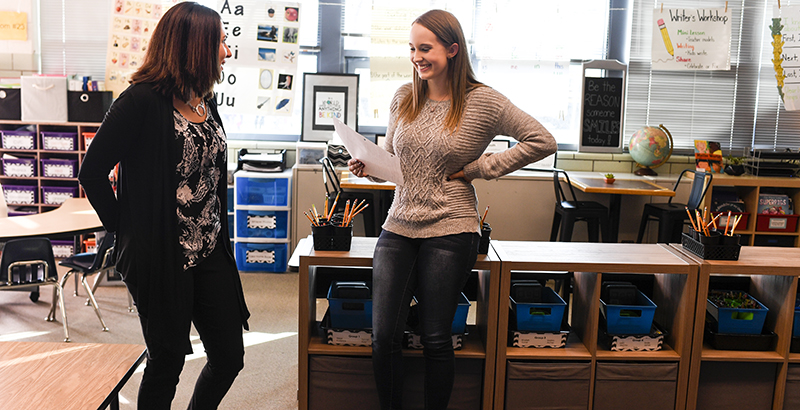 Each year, well over 100,000 teacher candidates pour into the nation’s K-12 classrooms in order to practice their skills before real children. Until this year, student teaching would typically last about four months, beginning with lots of observation before transitioning in the final weeks to taking over a classroom.

With this year’s end to schooling as we know it, student teachers barely got their toes in the water before the whistle blew. That meant the most valuable part of any new teacher’s training didn’t happen, raising a lot of questions and not very many good answers about what to do about it.

It is a catch-22 for state education authorities, all of whom require student teaching as a condition of being licensed. On the one hand, they have an obligation to families, students and teacher candidates to maintain standards, ensuring that novices don’t have to walk into a classroom like an ill-prepared understudy who’s barely seen the play, let alone had the time to learn the lines. On the other hand, districts may not be in a position to turn away any applications, fully prepared or not.

Some states, such as Georgia, Kentucky and New Jersey, are making a good-faith effort to uphold their standards, telling student teachers they can get their practice hours in by using the same virtual platforms that their students use. It’s less clear if their frazzled mentor teachers, trying to navigate the new reality themselves, see this solution as yet one more burden placed on them or as a welcome hand.

Other states, such as Mississippi, South Carolina and Michigan, raised a white flag, announcing that no matter how little student teaching was actually done, they considered it enough to qualify for a license in this time of emergency.

The truth may well be that states aren’t in a position to solve this conundrum. The coronavirus has made a mockery of time-sensitive regulations and practices across all paths of life, and in many such instances we may just need to swallow hard and move on. (Graduations come to mind.) However, some of the standard protocols that we’ve had to forgo will have a lasting impact, reaching well beyond the span of this pandemic — such as the effect of having tens of thousands of new teachers take jobs they are not, through no fault of their own, prepared to do.

School districts are in a position to mitigate this impact, with the most obvious solution being to make sure that new teachers get plenty of extra support to make up for what didn’t happen in student teaching. The problem here is a poor track record on the part of most districts, with scant evidence that most mentoring programs are able to reduce teacher attrition, not to mention increase the effectiveness of these novice teachers.

Another solution is worth considering, one that seeks to mitigate where the impact will be felt the largest: Put a temporary halt to assigning new teachers to the hardest jobs in the school district.

This solution needs some explaining. Districts know full well which students are most likely to be assigned a new teacher. It’s generally the children who are most dependent on school to secure a better future, those being kids growing up in poverty and those who are black or brown. These are many of the same students who likely started school already behind and who then continue to lose a bit more ground each year, even though we have strong evidence that this learning loss could be entirely prevented if schools paid more attention to who was teaching them.

These are also the jobs for which there are always the most vacancies, because that is an implicitly endorsed policy of districts. Any teacher with a few years of seniority is allowed to choose easier school assignments, and the most senior teachers are more likely to be assigned to higher-achieving students.

These patterns, well documented in research, represent basic labor market trends and could even be viewed as appropriate in a country that prides itself on freedom of choice. But a genuinely healthy labor market knows the full wisdom of incentives. In this instance, the employers (school districts) do little to incentivize the employees (teachers) to make decisions that will benefit the health of the organization. In most districts, teachers are paid on the same salary scale, regardless of their assignment.

The wisdom of paying teachers more to stay in harder jobs has been argued for years, but to little effect. Only a handful of districts offer teachers enough money to take on the tougher jobs, but several places where they do (such as Dallas and, until recently, New Mexico) report seeing a much more equitable distribution of teacher talent. Unfortunately, districts already face stark budget decisions, and monetary incentives will be low on the priority list.

It is a lot to ask of our veteran teachers after they have already taken on so much, but accepting more challenging assignments, even if just this year, could help lessen the “COVID slide” and give their novice colleagues a smoother start.

Principals will have to step up their creativity and resourcefulness to make sure that largely inexperienced teachers aren’t handed a job they can’t handle; they need time and space to cut their teeth.

Perhaps an experiment conducted in a time of crisis might prove what we’ve needed to do all along to transform a system set up to reinforce inequities. Teachers may discover that assignments they once viewed as untenable are in fact the most rewarding — as long as they have the skills needed to do the job.