(Olympia, WA) Washington state’s eight charter schools may be confined to the Seattle and Spokane areas, but the battle for them is not.

Ed Pacheco proved that when he showed up to a hearing in Olympia, Friday to testify in front of the House Education Committee. Pacheco is from the Yakima Valley in southern-central Washington state, where charter schools have yet to exist.

As representatives heard testimony for and against a bill to save charter schools after the state Supreme Court ruled them unconstitutional, Pacheco asked legislators to permit the schools on behalf of his 7-year-old daughter and the Yakima Valley’s Latino community.

“I came from Yakima because it is important that you hear voices from our side of the hill where too many Latino students are struggling in school,” Pacheco said. “Many of us simply don’t have the option or the means to go to private school or move to an affluent neighborhood with good schools.”

More than two-thirds of the 1,100 students now enrolled in the state’s charter schools are low-income and more than 70 percent are minority. A national study last year cited Seattle as having among the country’s widest academic achievement gaps based on race and income.

Pacheco sees charter schools as a pathway out of those statistics and toward an excellent education in his community, yet many at Friday’s hearing argued that innovation in schooling isn’t limited to charters. As charter school students shared testimony about how their schools have helped them succeed this year, others said that traditional public schools would have the capacity to produce similar results if funded properly, while maintaining stricter accountability to taxpayers.

“There’s plenty of talk that charters are the innovative schools and I can assure you — and I hope that many of you have visited with our public school district — that the same opportunities are available in our school districts,” said former state representative Marcie Maxwell. Maxwell referenced schools like Tacoma’s School of the Arts and several others there that focus on science, technology, engineering and math.

Yet in public testimony, students argued that their charter schools were helping them improve right now while the traditional public schools they attended last year weren’t working. Data released mid-February by the Washington State Charter Schools Association revealed that some students who entered below grade level have made significant strides, outpacing national peers in reading and math.

“In my old school, I never ever participated in class because I feared being laughed at,” said Excel Public Charter School seventh-grader Ashley Lopez. “But at Excel, nobody laughs at me, they just encourage me to keep trying.” Lopez added that she doesn’t mind waking up 30 minutes early if it means she gets to attend Excel instead of her former public school.

“In my anger I am not blind and in my fury I am not afraid to tell you how I feel,” said Excel sixth-grader Heskiyas Wondaferew to the committee. “I feel like closing charter schools would be wrong because the main goal here at Excel is attending and succeeding in college. If you guys close Excel, I would not be confident that any other public school could do the same for me.” 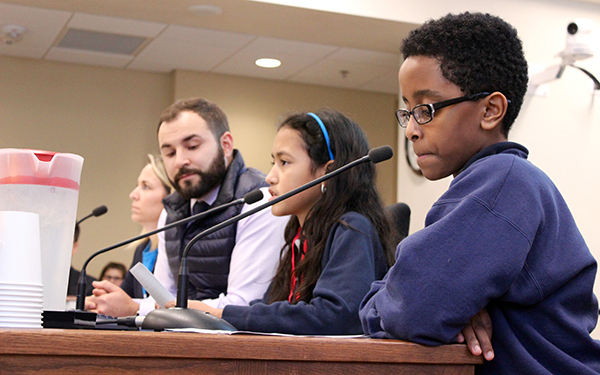 Charter schools became legal in Washington state after a 2012 voter referendum that envisioned 40 charters  opening throughout the state over the next five years.  But in 2015, the Supreme Court declared that charters did not fit the state’s definition of a common school because they are controlled by an appointed, rather than a locally elected, school board. That meant the schools were not eligible for state funding, the court ruled.

A bill passed by the Senate last month seeks to fix that problem by redirecting money to charter schools through the state’s Opportunity Pathways Account, which is funded from lottery revenue. The House bill mirrors the Senate’s.

But the teachers union, one of the parties that sued to disband charters, argues the proposed legislation  looks too familiar to the law ruled unconstitutional by the court.

“In (Senate Bill) 6194, which is almost identical to the law ruled unconstitutional, charter schools are run by private corporations, not by locally elected school boards who hire, evaluate and fire staff, who set the curriculum and basically govern the structure of the daily school,” said Lucinda Young, representing the Washington Education Association. “These (locally elected) school boards are accountable to their public citizens.”

The Senate bill would reinstate the Washington Charter Commission, which acts as a school board for the state’s charters. The board members are appointed by the governor, President of the Senate, and Speaker of the House.

Charter schools are subject to the same facilities, academic standards, teacher certification and civil rights requirements as any other public school, according to accountability information provided to state legislators by charter advocates. Once it goes through the application process, a charter school enters into a contract with its state or school district authorizer that involves oversight of financial, academic and organizational performance and requires the charter to reapply for authorization every five years.

The strength of Washington's charter law was ranked fourth in the country in a January 2015 study that measured how well states' charter regulations met 20 best-practices national standards.

Unlike the Senate hearings which witnessed a majority of pro-charter testimony, Friday’s House hearing appeared equally split in the number of panels expressing support and opposition to the bill.

Other anti-charter testimony argued that charters took away funding from public schools. But Alice Lara, a retired public school teacher for more than 30 years in Tacoma and Yakima, said that her experience in the system showed there’s not always room to innovate within the current traditional school model.

“Teachers cannot deviate from the structured curriculum,” Lara said. “They do not have the flexibility nor the time to diversify their teaching strategies to accommodate the different learning styles and I blame this mainly on class size and teacher training.”

Because so many people had signed up to publicly testify, committee members refrained from asking questions until the end of the hour-long  hearing. Perhaps the biggest theme legislators grappled with during questioning was why the successes of charter schools could not be replicated in the current traditional public school system.

“(Is there) anything structurally in our law that doesn’t allow our public school districts to do this?” said House Education Vice-Chair Rep. Chris Reykdal, D-Tumwater. “If so, we have a policy problem here. If, in fact, they do have it and they’re not doing it, that’s a personnel issue or school board issue or community issue.”

The House Education Committee is scheduled to meet again Feb. 25 during an executive session to vote on the bill. The last day of this legislative session is March 10.