Vouchers, Union Dues, Transgender Students: How the High Court May Rule Under Trump 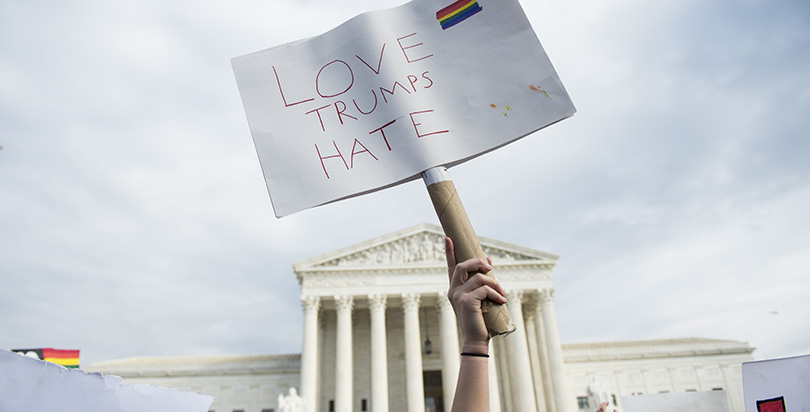 One of the longest-lasting impacts of Donald Trump’s presidency will be on the Supreme Court.

The nomination of at least one justice, to replace the late Antonin Scalia, and the legal positions advanced by Trump’s executive branch nominees could have dramatic consequences for any number of pending and future education-related cases.

Five such cases have come before the court this year: last term’s blockbuster-that-wasn’t mandatory union dues case; two concerning special education; one that could affect school vouchers; and perhaps the highest-profile legal question of this term, a case concerning bathroom and locker room access for transgender students.

(The 74: Supreme Court Preview: What You Need to Know About the 3 New School Cases at the High Court)

One of the special-education-related cases, Fry v. Napoleon Schools, was argued October 31.

Justices don’t participate in case decisions if they didn’t hear oral arguments, so that one will be unaffected by the ninth justice.

Three others are currently pending before the high court. None are yet scheduled for oral arguments, but conceivably any could come before the justices in early 2017, before a ninth justice is seated.

The most-watched, Gloucester County School Board v. G.G., addresses whether senior Gavin Grimm may use the men’s restroom even though he was assigned female at birth. Lower-court rulings have hinged on May guidance from the Obama administration that said Title IX, which prohibits discrimination in education based on sex, also applied to gender and transgender students having access to bathrooms and locker rooms that match their gender identity.

(The 74: SCOTUS to Hear Virginia Transgender Case with Big Implications for Ed Policy and Beyond)

Should the Trump administration overturn that guidance (an easy change because it came in the form of a “Dear Colleague” letter rather than a formal rule) before oral arguments, the justices could send the case back to a lower court to reconsider in light of the Trump-era guidance. Or they could keep the case and decide it using their own interpretations of Title IX.

The ACLU, which is representing Grimm, asked the high court to hold off on considering the case as others making similar claims work their way through courts across the country. But should the court keep the case, Grimm’s attorney said they have a strong argument.

“It doesn’t make any sense to force trans people into the wrong spaces, and how could that be anything other than sex discrimination?” James Esseks, director of the ACLU Lesbian Gay Bisexual Transgender & HIV Project, said at an event earlier this month.

How a conservative judge appointed by Trump would rule is difficult to decipher, Esseks said.

Scalia, a conservative stalwart, authored a unanimous opinion in 1998 that ruled that federal laws banning sexual harassment in the workplace applied to members of the same sex, Esseks said. That decision became the legal underpinning for rulings by the Equal Employment Opportunity Commission banning workplace discrimination based on sexual orientation and gender identity.

“We’re back to what could be a 5–4 court, but it’s not really possible to anticipate in advance how any of the justices are going to vote,” Esseks said at the November 16 event sponsored by The Atlantic.

The court earlier this year also agreed to hear a case that would decide what level of educational benefit schools must provide to children with disabilities covered under the Individuals With Disabilities Education Act.

Endrew, a child with autism, made little progress in public school in Colorado. His parents moved him to a private school and sought reimbursement from the school district, arguing it was necessary after he failed to advance in public school.

(The 74: Why Advocates Hope the Supreme Court Will Save Special Education)

Lower courts sided with the district, arguing that because Endrew made some progress in public school, the private placement wasn’t necessary. But there is currently a split among circuits, so depending on where a disabled student lives, they could either be guaranteed “some” educational benefit or a “meaningful educational benefit.”

The case could be argued before a ninth justice is seated, but like the transgender-rights case, it could also be affected by administration policy.

The Obama administration weighed in on behalf of Endrew, both in urging the court to take the case and in arguing for the higher standard. The Trump administration could walk back that position.

“I really do look at this as not a partisan argument,” he said.

“You can never tell, but that would be my sense, that having staked that out [the position arguing for a higher standard], I think it would be highly unusual” for the Trump administration to reverse course on the federal government’s position, he added.

Another election besides Trump’s could affect a pending case concerning whether states must provide funding to churches and other religious institutions for non-sectarian purposes — one that advocates say could have big implications for school vouchers.

Specifically, a preschool run by a Lutheran church in Missouri applied for a state grant to help refurbish its playground. Despite its ranking high among the applicants, the state Department of Natural Resources did not award any funds, arguing that the state constitution prohibited public funding of religious activities.

Justices accepted the case, Trinity Lutheran Church v. Pauley, in January, before Scalia’s death, but then delayed scheduling oral arguments, perhaps an indication they were trying to avoid a 4–4 tie.

But thanks to a recent election, the case might not reach them.

Republican Josh Hawley was elected Missouri attorney general this month, and he does not seem inclined to advance the state’s position denying the funding.

On his campaign website, Hawley sided with the church. “I’ve made my career defending religious liberty and constitutional freedom,” he said. “I can tell you this is a vital case for all people of faith in Missouri. Blaine Amendments [prohibiting public funding to religiously affiliated schools] cannot be allowed to trump the First Amendment.”

Some court observers expect him to settle the case before it reaches oral argument.

There also could be a path to revive the basic premise, but not the specific case, from last year’s teacher-union-dues case, Friedrichs v. California.

Teacher Rebecca Friedrichs argued that forcing her to pay “fair share” fees to the local teachers union was a First Amendment violation. The court seemed poised to hand down a 5–4 decision in favor of Friedrichs and the other teachers, but Scalia died before the final ruling was issued.

The high court this summer denied the teachers’ motion for a rehearing, so any further consideration by the court will have to go through a separate case, explained Terry Pell, president of the Center for Individual Rights, the libertarian group that backed Friedrichs.

There is a case pending in the Seventh Circuit, Janus v. AFSCME, in which three Illinois state employees argue they shouldn’t have to pay “fair share” union dues. Whether it’s that case or another, most of the jurists Trump has proposed would at least be open to the arguments against mandatory dues, Pell said. The Center for Individual Rights isn’t supporting the Janus case, nor any others concerning the First Amendment and union dues at the moment.

There are “good odds” of a 5–4 decision to overturn mandatory-dues law within the next one to two years, he said.