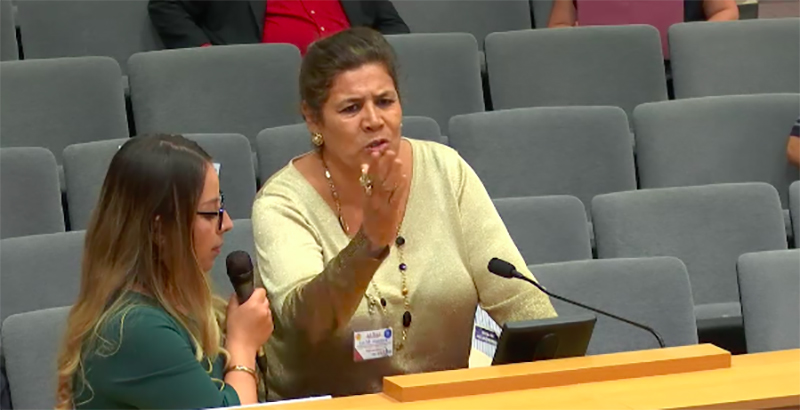 Parents blasted L.A. Unified officials at a school board hearing last week — one even bursting into tears — offering an angry glimpse into the fractured trust between the community and the district just one week after voters overwhelmingly rejected a new parcel tax.

Many of the more than 20 speakers at Tuesday’s four-hour session expressed ongoing frustration with the ambiguity of L.A. Unified’s $7.8 billion operating budget and Local Control Accountability Plan (LCAP), a three-year plan updated annually that outlines the district’s goals and actions for improving student outcomes. Tuesday’s meeting was the first since L.A. Unified’s bid for a $500 million-a-year “Measure EE” parcel tax failed at the polls, and it was also the first time the finalized 2019-20 budget and the LCAP were formally presented to the public. The board will vote on both Tuesday.

“All of the voters are tired of you,” parent Luz Maria Montoya said in Spanish. “We don’t know what work you are doing.”

Some parents said district documents don’t clearly explain changes to student programs and services for next year. Others added that there isn’t transparency or robust “monitoring” of how L.A. Unified’s expenditures, such as professional development and training for teachers and principals, yield actual results for students. Montoya, for example, called district services for English learners and special education students “an embarrassment.”

A few also accused L.A. Unified officials and principals of keeping parents out of budget and policy discussions — treating them “as sheeps, as herds,” as one speaker said — rather than welcoming them to the table as a partner.

“We have a lot of barriers” to knowing what’s going on, said parent María Daisy Ortíz, who addressed the board in Spanish. “We want to work with you, not against you. But respect us. … No one returns the wasted time to our children.”

Parent María Daisy Ortíz waves around district documents during a June 11 school board hearing on the budget and LCAP. (L.A. Unified)

Ortíz had brought parts of the 112-page LCAP plan with her, noting that much of it feels like a “copy and paste” job. She waved the papers in the air, her voice rising. “Please don’t deceive us with false data that are doctored, because truly, that is why Measure EE did not pass,” she said.

Juanita Garcia, a grandmother of three children with special needs, broke into tears when recounting the difficulty she’s had getting help and answers from the district after one of them was injured in January. “Up to today I have not received a report,” she said in Spanish. “Is that what we call accountability and responsibility?”

District 4 Board Member Nick Melvoin addressed the lack of public trust at Tuesday’s meeting, peppering in some concerns of his own.

“I’ve asked ad nauseam for a document showing changes [to programs or investments] and have not received anything for months,” Melvoin said. “We’re not showing how this budget reflects our shared values or strategies for improving outcomes.”

Melvoin also acknowledged Tuesday that he didn’t think the budget presentation helped quell ongoing skepticism of “how we can balance our budget every year and yet cry poverty.” Melvoin’s comment was underscored by the 2019-20 budget showing the district operating in the black for the next three years despite ongoing threats beginning late last summer that deficit spending could force a county fiscal takeover if L.A. Unified began dipping into mandated reserves.

In addition to the frustrated comments of parents during the public hearing, two districtwide parent advisory groups — the District English Learner Advisory Committee and Parent Advisory Committee — offered more formal feedback to the board on the LCAP’s six goals. They are: 100 percent graduation; proficiency for all; 100 percent attendance; parent, community and student engagement; ensuring school safety; and basic services.

Some of the key suggestions included:

● Having a strategic plan for how English learners will catch up on instruction time lost during January’s six-day teacher strike.

● More counselor focus on A-G requirements, which students need to meet to be eligible to apply to the state’s public four-year universities.

● Attendance incentives that celebrate not only students with the highest attendance but also those who are “most improved.” “The kids at the end of the [attendance] spectrum, we really need to boost them up,” Parent Advisory Committee chair Paul Robak said.

Superintendent Austin Beutner agreed with parents Tuesday that “We have to become better program evaluators … focused on what the students’ achievement is in the schools.” His office sent out a statement during the meeting calling for “a new approach” to the LCAP.

In response to a question from LA School Report on why the parent committee presentations were scheduled only a week before the budget vote, a district spokeswoman said in an email that the two parent advisory committees held 11 total meetings “from January to June, and comments from those meetings were shared with the Superintendent a month ago. Feedback from [both] was incorporated in the LCAP, specifically the continuation of desired programs and the increase in school site autonomy and staffing.”

While parents have voiced concerns about transparency, accountability and parent engagement for years, the 2019 teacher strike and resounding parcel tax defeat could signal that the district and the board need to pay closer attention to stakeholders’ concerns as they campaign for more investment in the schools. The parcel tax’s demise, as observers have noted, was a reminder that the outpouring of support during January’s teacher strike is not unconditional — especially when it comes to money.

Even without the tax revenue, the latest budget shows sufficient revenues for the next three years. That’s a sharp departure from a March budget update that projected the district’s ending balance would fall $749 million short of required reserve levels by 2021-22 if voters didn’t approve the tax. The district now estimates having a $10.5 million surplus in 2022. School officials said they managed that swing in their projections without the parcel tax money after finalizing some health care savings, receiving a state waiver that excuses L.A. Unified from paying penalties for its administrator-teacher ratio and enacting other budget realignments.

By projecting that it won’t dip into its mandated reserve in the next three years, L.A. Unified no longer appears to be under direct threat of a county takeover. Fiscal experts installed in January by the county Office of Education will stay with the district in an advisory-only role until at least December, Chief Financial Officer Scott Price told the board Tuesday.

Chief Financial Officer Scott Price presents the 2019-20 budget to the board. (L.A. Unified)

But it’s not an all-clear. L.A. Unified still projects it will continue spending about $500 million more a year than it takes in. On top of signing a teacher contract in January that it can’t fully afford, it also faces growing pension contribution costs and declining enrollment — an estimated 14,656 fewer students next year — that lowers its state funding.

Down the line, upcoming health care and labor contracts could increase spending and push 2021-22 budget projections back into the red, a district spokeswoman confirmed in an email to LA School Report Wednesday.

At Tuesday’s meeting, President Mónica García said she “loved” the idea of “a weekly or monthly budget conversation so that more people understand the full picture.” Newly elected member Jackie Goldberg also suggested compiling public feedback on different parts of the budget in the months leading up to the final version.

When Goldberg served on the board three decades ago, members would “pick a different topic [within the budget] each month in March, April and May and invite the public — all our labor partners, everybody — to come and say, ‘What you’re doing with the budget is this,’ or, ‘We’d rather you do that,’” Goldberg said. “That helped encourage people to feel like there was much more transparency.”

Speaker Juan Godinez hopes any progress forward will be sincere.

“If we are partners, let’s have parent engagement because the district wants it,” he said. “Not because a law tells you to have it.”