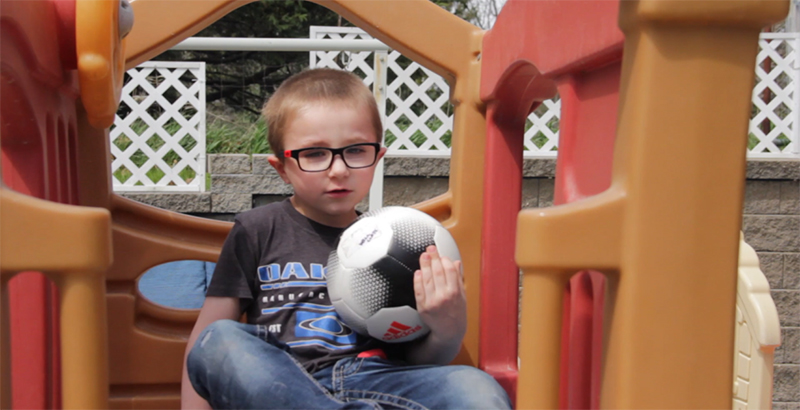 Will Clark, 5, plays outside at his Oxford, Iowa, home. Will, a preschool student, who is among several children on the autism spectrum, had difficulty adapting to online learning during the COVID pandemic. (Kaitlin Laing / Special for IowaWatch)

Will Clark ran about his home, munching on chicken nuggets while watching the movie “The Nut Job.” The 5-year-old acted out the movie scene-for-scene, shrieking when something exciting happened on the screen and mimicking dialogue the best he could.

His mother, Stephanie Glass, watched from the kitchen table at their Oxford, Iowa, home where she sat with Wesley, her 1-year-old son. This was shaping up to be a normal spring Tuesday night at the Glass home. The COVID-19 pandemic hadn’t changed that, at least.

But it changed dramatically how Will and other children like him who are on the autism spectrum had to deal with learning. These children have faced unique hurdles over the past year of the COVID-19 pandemic, whether they are learning online, hybrid or in-person.

“Less than ideal,” Glass said about how Will started online preschool in fall 2020.

The Centers for Disease Control and Prevention reports that one in 54 children has been identified with autism spectrum disorder by age 8. People on the spectrum persistently have difficulty communicating and interacting with others and are prone to restrictive or repetitive behavior. Online learning, with impersonal factors such as having to watch a small screen and not having a teacher present, amplified the problem during the pandemic.

Will had difficulty taking in information being taught online. Glass said she could tell he wasn’t getting aid he needed from his teacher.

In March 2020, Will had been thriving on his routine of school, speech therapy and family time. He stayed home from Clear Creek Elementary School in Oxford to get his tonsils taken out before spring break last year, and ended up spending the rest of the school year at home.

“We didn’t really go anywhere, we didn’t really do much,” Glass said. “And, it was super, super hard, especially with Will, because he’s so active and so rambunctious.”

Glass said Will was diagnosed with autism after he started preschool in 2019. He was non-verbal until a year and a half ago. The family spends days hopping between school, therapy, their own home and Glass’ parents’ home a few minutes away.

While every child had a learning curve when it came to virtual learning during the COVID-19 pandemic, Glass said the way online classes and lessons were set up didn’t cater to Will’s needs. She said she had to redo lessons with Will and work on assignments with him.

Zoom sessions and assignments were curated in such a way students with issues focusing for long stretches of time struggled to absorb information. The teacher conducting Will’s online lessons wasn’t his normal teacher. It wasn’t that the teacher was bad, she said. It’s just that the teacher didn’t know how to properly accommodate a student with autism in online learning.

The Autism Research Institute, in San Diego, recommended several actions to take with students on the spectrum who had to switch to online learning. They included explaining the situation to the child doing the learning, creating reasonable expectations, setting a schedule, involving the entire family and setting up support that relates to online learning.

Tim Fairbanks, of Iowa City, said his 7-year-old son, Cooper, became increasingly stressed trying to keep up with technology problems and changes. He also had a hard time sticking with the online schedule.

Children on the spectrum have the tendency to fixate on those types of problems, said Fairbanks, a school facilitator at Weber Elementary School in Iowa City and trained behaviorist with a master’s degree in social work.

“By mid-April, we had essentially quit trying to go to school,” he said about Cooper.

The biggest problem for kids who need individual educational plans is that Iowa’s school districts lack important resources from the state, Fairbanks said.

In the spring of 2020, many schools in Iowa were not able to supply laptops immediately to all of their students for online learning, Fairbanks said. On top of that, Cooper’s therapy was moved to online so Fairbanks needed to buy his son a laptop.

As Cooper began to use Zoom frequently, he became proficient with it. But, within a few months, he had gotten tired of sitting on a computer every day. Cooper will stay online until fall, although he wants to be back in the classroom with his peers, Fairbanks said.

Online learning has not been a fight for everyone on the spectrum. “I have had a handful of patients that this has been a far more beneficial experience for,” Lisa Henry, an education consultant at the University of Iowa Stead Family Children’s Hospital, said.

Several of Henry’s students have found that online learning gives them the ability to avoid a distracting setting, she said. The pace of learning also can be adjusted online to better suit these and they retain more information than they may in person.

Some of these families have chosen to stay fully virtual now that students are back in school, Henry said.

The comfort level students on the spectrum have is mixed in the Iowa City Community School District. “We’ve seen some students who have really flourished in a setting where that anxiety of being around peers isn’t there,” Kristin Fechner, the district’s instruction design strategist, said. “On the flip side we’ve seen that it’s really hard to decipher between school and being at home in their bedroom.”

Kelly Postman, a special education teacher for grades kindergarten through sixth at Iowa City’s Weber Elementary, said knowing her students on the spectrum would not get attention online that they needed was stressful personally. This is her second year teaching at the school.

Connecting with students was hard via computer and she said she felt isolated from them. Each week she wrote a postcard for each student. She said she also went to toy stores to buy manipulatives and put together packets for students to use at home. Manipulatives are toys and tools meant to help kids learn certain skills, like learning math with play money or telling time with a toy clock.

Postman provided her students with tests that monitored their progress but advocated for her students to take these quizzes on their own, without their guardians’ assistance, in order to obtain accurate data.

Postman noticed when students on the spectrum for online classes began to lose their attention halfway through their sessions. “Some kids need to be here, they need to have that physicality of being in school. And, there are some that do very well being at home and just Zooming in,” she said.

One silver lining that has come out of the COVID-19 pandemic and online learning is increased collaboration between teachers and families, Fechner said. Educators are able to get a glimpse into students’ home lives, and parents get to see how their child works in a school setting.

During a normal school year, parents check in with how their child is doing during parent-teacher conferences.

Back to the Classroom

Will Clark went back to preschool in person in January. His mother said the transition returning to the same classroom he had learned in the previous year, and with the same paraeducator, made the move easy. Will also returned to in-person speech therapy.

Glass said Will is going to most likely stay in preschool for another year, as she isn’t sure if he’s ready for kindergarten. Outside of school, Will’s next big step is swimming lessons.

Glass said the problem won’t be getting him into the water but, rather, getting him out. Will loves water so much, she said, that she has worried about him being in danger of drowning because of his curiosity.

Doctors have told her that Will can “function in society on his own,” which gave her a sense of relief, Glass said. Even with the obstacles Will has faced this year, learning how to do things like identifying pictures in therapy have given her hope for his future.

“As a parent, you want to see your kids succeed, you want to see them be successful. And when you get a diagnosis like that, it’s not something where obviously, it’s not … life ending,” Glass said. “But, it does change the course that you had set out for your kids,” she said.

“I’m hopeful for where he will go, and I’m excited for his future because he is doing so well.”

This article was produced by the Iowa Center for Public Affairs Journalism-IowaWatch, a non-profit, online news website that collaborates with news organizations to produce explanatory and investigative reporting. Read more at www.IowaWatch.org. Kaitlin Laing and Sean Bock contributed reporting for this story, a project of a University of Iowa School of Journalism and Mass Communication spring 2021 class.