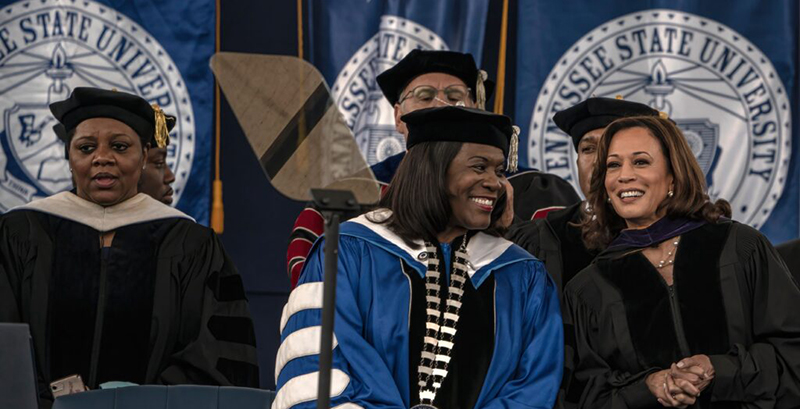 On a rainy spring morning, Vice President Kamala Harris stood before Tennessee State University’s class of 2022, reviewing the past and a future unknown to the graduating students.

Before her played a montage of the country’s history of Black Americans, of Emmitt Till’s murder, the Civil Rights movement and Martin Luther King Jr., all of which led to the first Black president, Barack Obama, being elected.

The rain stopped for a moment as she began to speak words of praise for the graduates, who were born and raised to witness several historical events in their lifetimes.

“You are a generation that grew up online and survived a pandemic,” she said.

“And the world that you graduated into is unsettled,” she added.

Although inequality has always existed, she said, history is repeating  itself as women and men once again face disenfranchisement through extreme wealth inequality, disparities in criminal justice, voting rights and other “fundamental principles we hoped were long settled.”

“Principles like the freedom to vote and the rights of women to make decisions about their own bodies,” she said. 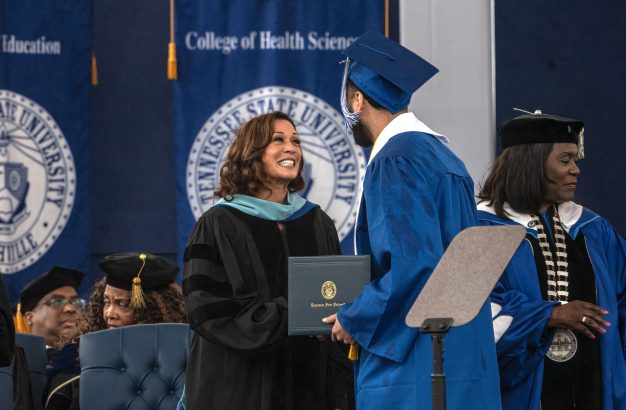 These issues now loom over the graduates’ futures and now fall on their shoulders to create a better future, she noted, as she looked over the mainly minority students.

There will be many times that these graduates will look at a room full of people that don’t look like them, but Harris reminds them they’re not alone.

“And at that moment, you must remember that you are not in that room alone. Always know that you carry the voices of everyone here and those upon whose shoulders you stand,” she said.
She ended on a note about her mother.

“My mother would often say to me, Kamala, you may be the first to do many things, make sure you are not the last,” said Harris. “I have been many firsts in my lifetime and as I look out at all of you today, I know I will not be the last,” she said. “I cannot wait to see the future you create.