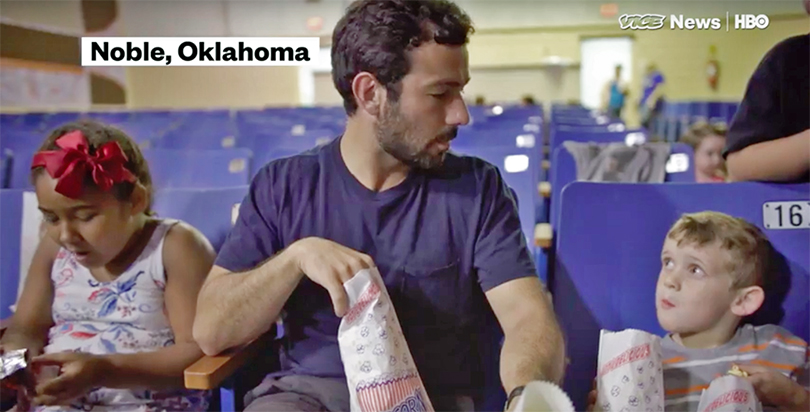 It’s a sunny Friday morning in Noble, Okla., and kids are biking through town, eating at a diner or playing video games in the library. What aren’t they doing? Attending school.
That’s because Noble is among the one third of Oklahoma districts that have reduced their school week to four days because of budget cuts, according to a report from Vice News Tonight.
Vice News Tonight, a 30-minute newscast aimed at millennials that airs on HBO, devoted five of those minutes last Friday to Oklahoma’s education funding troubles. Reporter Roberto Ferdman visited Noble, a district with 2,900 students, and spoke with students, parents and educators about the four-day week, which started this school year.

“The initial conversations were hard,” Principal Nathan Gray told Vice. “Teachers have been reluctant. I mean, you’re now forced to cover all the curriculum, all the testing that’s required by the state, in four days that you were [in] five.”
Asked PTA head Annie Broom: “How much can you really squeeze into four days?”
Gray said the district decided to go to a four-day week after months of escalating funding cuts last school year. It was just one of many cost-saving measures. For example, Gray used to be principal of one elementary school; now, he runs two schools. The superintendent handles bus duties that staff used to perform.
Vice reported that Noble expects even more funding cuts in the future.
Kids lose more than just a day of school
Parents in the district worry about what this means for their children. They fear their kids will end their school careers far behind their peers statewide and nationwide who attend class five days a week. For students with disabilities, the Monday-through-Thursday schedule means missing a full day of developmental support from trained staff. For parents who have to work, it means some of their children are left home alone. Broom helps out by watching kids on Fridays.
More than 120 school districts in 21 states operate on four-day-week schedules, according to the National Conference of State Legislators. Usually, these are small, rural districts looking to save money on heating, transportation and staff.
(Read More: 5 States in Crisis: Budget Battles, Court Challenges, Political Bickering Leave Schools Millions Short)
Since 2008, Oklahoma has slashed its per-student education funding by 27 percent, more than any other state, according to a report by the Center on Budget and Policy Priorities. One reason for this is cuts in the state’s income tax rates, which have reduced the amount of state aid available for education. Another is the decline in the state’s oil revenues.
Oklahoma’s districts are having a hard time keeping up.
This year, Oklahoma City Schools cut 208 teaching positions and 92 administrative staff, The 74 reported. Its Newcastle Public Schools charged families $100 for extracurriculars, eliminated most field trips and delayed a major textbook purchase. In Tulsa, school leaders are holding community fundraisers to fill in the gaps.
Budget cuts also mean overcrowded classrooms and fewer available certified teachers. As The 74 reported last year, teachers can make more money by crossing the state line to work in Texas, or by working at a private school.
“I think we are in a critical situation,” Norman Schools Superintendent Joe Siano told The 74 last year. “I liken it to showing up to the emergency room with a life-threatening issue.”
(Read More: Why Oklahoma Is Racing to Put Nearly 1,000 Uncertified Teachers in Its Classrooms)
Oklahoma educators say they are fed up with the lack of state funding — and are taking political action. More than 40 of them are running for public office, PBS NewsHour reported, a record number.
“We have a lack of representation at the state capitol,” Shawn Sheehan, a former Oklahoma Teacher of the Year who is running for state senate, told PBS. “We have folks up there who don’t really understand what’s going on in education and what’s going on in our communities.”
See Vice’s coverage here.
Submit a Letter to the Editor
October 27, 2016