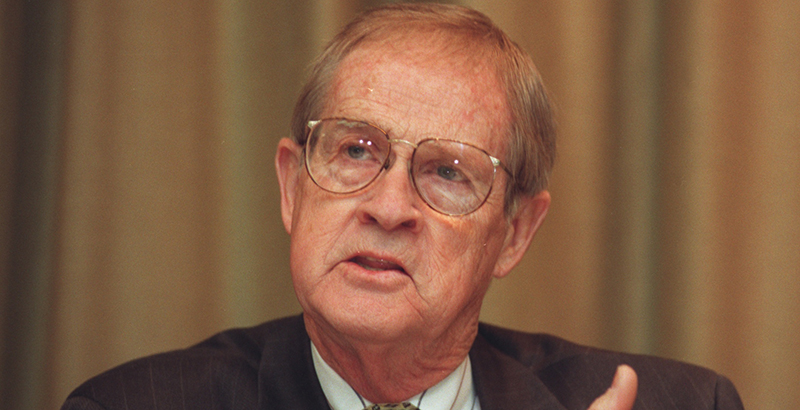 A few days ago, I heard the news that a previous boss of mine, former congressman Bill Goodling (R-PA), passed away at the age of 89, and it filled me with a profound sense of loss.
Bill Goodling was truly one of a kind, a throwback to earlier days when politics was less of a contact sport and more focused on finding consensus to advance key policy reforms.

Perhaps the easiest way to describe him is the simplest: He was a good man. I’ve worked with or around Congress for nearly my whole professional life and, to be truthful, at times it’s been more than a little discouraging. Too much palace intrigue; not enough working together to get things done.

And then there was Mr. Goodling.

He loved his wife Hilda (also an educator) and his children, and talked about them often. He loved people, and had an especially soft spot for his staff, who — like me — he stayed in touch with long after they and he moved on.

He was very much like a favorite uncle — always there when you needed him, interested in the details of your life, and loved needling people when the opportunity arose. I think he particularly enjoyed giving me a hard time for my lack of punctuation skills in letters and documents I put together for his review. Once a teacher, always a teacher!

In the early days of talk radio, cable TV, and, eventually, computers and the internet, Mr. Goodling ignored — and often laughed at — all the political craziness that swirled around him and instead always focused on the job at hand. He was a traditional Midwestern fiscal conservative who got along with his neighbors and constituents from all political stripes. He respected all viewpoints and was willing to listen to ideas from friends and foes alike, all in the name of finding the best solution to the policy problem of the moment.

Public service was the hallmark of his life. After being stationed in Japan for three years after graduating from high school, Mr. Goodling served the citizens of Pennsylvania as a teacher, counselor, coach, principal, superintendent, and school board president. He served 26 years in the House of Representatives from 1975 to 2001, including six years as chairman of the House Education and the Workforce Committee from 1995 to 2001.

As the senior House Republican drafting education policy, Goodling brought a treasure trove of experience and sensibilities to the issue — a fact that made him unique among his congressional colleagues. He was extremely skeptical of high-minded, well-meaning, one-size-fits-all education “reforms” dictated by Washington that ignored the local practicalities of on-ground implementation. Instead, his years in education led him first and foremost to trust the individual educators and district leaders at the state, and especially local, level.

For example, he strongly opposed a single national test proposed by President Clinton and stopped it in its tracks. At the same time, however, he worked to support the robust state-led standards and assessments that are now enshrined into law across the nation. He encouraged states to expand the educational options available to parents, but was unwilling to support federal school choice mandates.

Perhaps most notably, he was skeptical of high-profile reading programs developed by high-minded researchers and experts, and focused his energies instead on family literacy programs that recognized the crucial role of parents as their children’s first teachers.

So rest in peace, Mr. Goodling. Thank you for your service to your country. Speaking selfishly, thanks for being such a great boss, mentor, and friend. Even in these tough political times, your legacy will preserve my enduring faith in institutions like public schools and Congress.

If only there were more public servants like you.

Vic Klatt is a principal at Penn Hill Group, a bipartisan lobbying and consulting firm focused on education policy. He previously worked at the U.S. Department of Education under the leadership of Secretary Lamar Alexander, and is a former staff director of the House Education and the Workforce Committee.