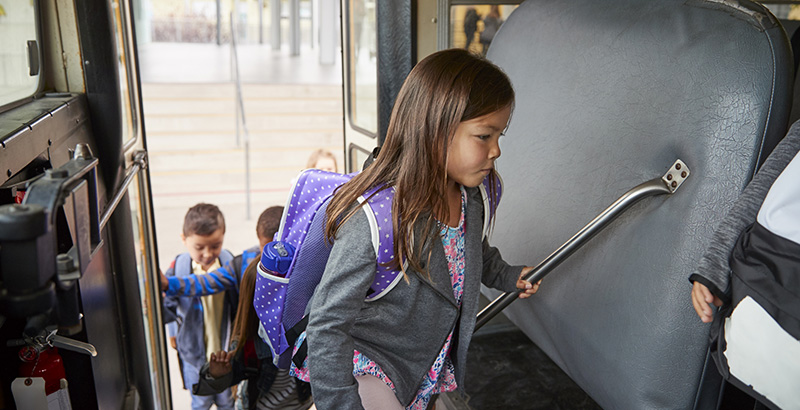 For many schools, one of the biggest problems occurs before classes even begin. Busing has become a conundrum that tests districts every morning.

While driver shortages and rising costs for buses and repairs are issues for schools nationwide, in Indianapolis, these challenges have spurred innovations for both the school district and a nonprofit that supports the charter and innovation schools that educate 60 percent of the city’s children.

Because the district’s per-pupil busing costs outpaced that of other districts in the state, “We had to rethink our long-term strategy,” said Zachary Mulholland, Indianapolis Public Schools’s executive director of operations.

With school choice available to every student in the district, children in Indianapolis travel farther on average than those who attend their neighborhood school. Throw in rising transportation costs, the city’s odd star shape and a massive road construction project downtown that necessitated changing routes, and change was necessary, he added.

In September, the district started enforcing rules limiting bus service to elementary students who live more than a mile from school and to high schoolers who live more than 1.5 miles away, consolidated school bus stops and offered some high schoolers mass transit passes in lieu of school transportation. This removed about 2,500 students from the bus system, allowing the district to chop 70 routes from the 300 it had been running.

Consolidation was also the answer for the city’s innovation and charter schools — but for a different reason. Before the pandemic, each school would arrange transportation for its own students, meaning thousands of kids were criss-crossing the city’s 368 square miles every day. But this unwieldy arrangement was exacerbated when the pandemic started; it became harder to find drivers, bus vendors had less capacity to serve single schools, and as school choice grew, it became more likely that children living on the same street would be attending different schools, said Kateri Whitley, director of communication at The Mind Trust, a nonprofit that supports school choice in Indianapolis. “This created a lot of inefficiency.”

When that idea was thwarted by the school bus shortage, the group investigated using vans — but ran into bureaucratic red tape. A state regulation prohibits the use of any vehicle other than a full-size yellow bus to transport children to school, even if the schools need to move only a handful of students.

“It’s really hard for a single school to get good [bus] service,” said Brandon Brown, CEO of The Mind Trust. “We view this as an equity issue. These are some of the most onerous transportation rules in the country.”

Brown took his cause to the state Legislature and persuaded lawmakers to pass a bill that would give schools the flexibility to use smaller vehicles to transport students. The legislation fixes two problems: It allows schools to use vans, and the drivers won’t need a commercial license, making them easier to hire in today’s competitive workforce. Gov. Eric Holcomb signed the bill March 18.

Such attempts to rethink transportation to improve student service while controlling costs are rare, according to a report from Bellwether Education Partners that calls for more schools and governments to consider radical changes. In the last 40 years, the per-student cost of busing a child from home to school has jumped 75 percent, according to the nonprofit’s 2017 report, Miles to Go: Bringing School Transportation into the 21st Century. This is mainly due to two factors: with more school choice, students are as likely to travel crosstown as across the street, and fewer overall students are using buses to get to school.

Though Indiana is one of only two states that don’t require districts to offer students any transportation to school, the Indianapolis district has been ahead of the curve for a while. The district refurbished its bus fleet in 2016 by buying 100 buses, Mulholland said, and it outsourced its entire transportation system ahead of the 2020-21 school year, shielding the district from the nearly $1-a-gallon increase in gas costs last year.

Still, the district “felt the pinch,” Mulholland said, as it raised salaries and doubled up routes to battle driver shortages. And while existing contracts protected the district from inflationary price increases, that’s a temporary respite until those contracts are renegotiated, he said.

While Indiana’s prohibition on using passenger vans to transport students may seem outdated, it is far from rare. Twenty-nine states prohibit using vans with students in any way, while another 11 states, including Indiana, allow them only for school-related activities, such as field trips and athletic events.

The change could save millions of dollars for the city’s charters and innovation schools, said Brown. The Mind Trust hopes to serve up to 15 schools this fall using both full-size buses and passenger vans, Whitley said.

Disclosure: The Mind Trust provides financial support to The 74.