Union Report: When Will Teacher Strikes End? When the Unions’ Cost-Benefit Analysis Finds Them to No Longer Be Profitable 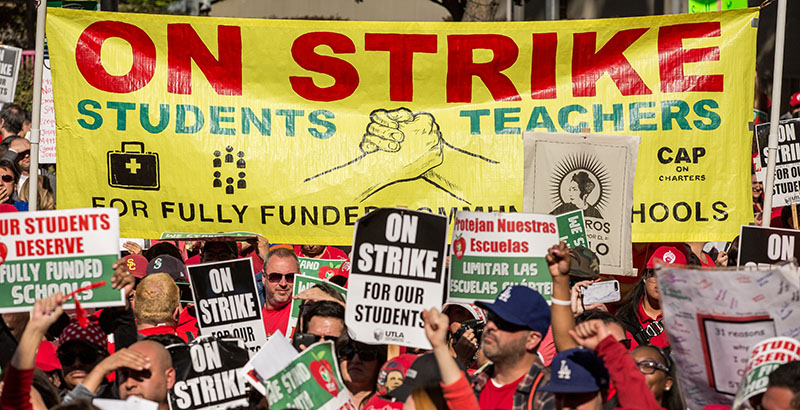 Spoiler alert: There have been a lot of teacher strikes in the past 12 months.

No sooner does one end than two or more appear on the horizon. The latest West Virginia strike was launched more abruptly than any. Collective bargaining laws and no-strike provisions are a minor impediment at most.

The consensus view is that teachers are fed up with being underpaid and unappreciated. If they are not leaving the profession in droves, they are marching in the streets to draw attention to their plight.

For once, I’m not even going to argue about the consensus view. But why are we having so many strikes now?

In the aftermath of the Great Recession, teachers were being laid off across the country. In many places, class sizes grew and salaries were frozen. By any objective measure, the situation was worse than it is now. Yet we saw only a handful of strikes during those years.

The reason seems obvious, and it is not unique to the teaching profession. When you are grateful to still have a job, you are more likely to overlook the less desirable aspects of it.

Today, our economy is approaching full employment and the workforce is aging. Teachers know there is no longer a pool of laid-off colleagues eager for a position. With job security come new demands from the labor force.

Despite all this, and the hagiography surrounding the Chicago teacher strike of 2012, teacher unions were slow to embrace the strike. Much has been written about how the 2018 walkouts in West Virginia, Oklahoma, and Arizona were launched and sustained outside the traditional union structure.

That’s mostly over now, which was probably inevitable. Social media can incite a rally, but it’s bad at raising money to organize one, or delegating responsibilities for the various tasks needed for a successful outcome. The teachers unions have money and an organizational flow chart in place.

What the unions learned from the grassroots groups is that strikes get your supporters out in force, garner mostly positive publicity, have great potential to increase membership, and might even get more of your demands met — although that last item isn’t a certainty.

All unions claim victory after a strike, but their definition of victory often changes as the strike goes on. United Teachers Los Angeles won the elimination of a hated class-size-limit exemption, but it cost teachers more than half the salary increase the district offered before the strike. The Oklahoma walkout gained teachers little that hadn’t already been won before it took place. Ditto Arizona.

Some members griped about these shortcomings, but as long as everyone came out ahead at the end, their complaints were muted.

We tend to cover unions and strikes as mass movements, but they are also economic activities. Unions conduct a cost-benefit analysis that is constantly re-evaluated as the job action goes on. Teachers withhold their labor to achieve an advantage they did not have before.

Finally, these are public-sector unions. If your clients cannot easily take their business elsewhere, why not go on strike?

So the strikes will continue in a lot of different places, because there are only two teachers unions and they ultimately provide money and manpower wherever it’s needed. Strikes will cease only when and where the costs exceed the expected benefit. For the unions, that’s just good business.