As difficult as it may be to believe nowadays, when teacher unions deem charter schools their mortal enemies, there was a brief period of time when they took a different approach. Affiliates of the National Education Association and American Federation of Teachers once created their own charter schools. They were to be established as models for how excellent schools could be if the best educational and labor practices espoused by the unions were followed.

NEA’s motto is “Great Public Schools for Every Student.” Here’s what happened when the union tried to construct one great public school for 450 students.

In 1996, NEA created the Charter School Initiative. It was a project to build and support six charters around the country. The national union put $1.5 million behind the effort. Then-NEA President Bob Chase told a congressional subcommittee that “charter schools can become a positive vehicle for reform within public schools, depending on how they are developed, funded, structured and governed.”

Chase was convinced that “when charter schools are created along the lines that our members have chosen, professional educators applying best practices and teaming with parents and community members, that they do indeed offer hope for positive changes within our public school system as a whole.”

He did express concern that many charter laws “do not require charter school students to take state assessments, thereby making it difficult to compare their achievements with students in other public schools.”

Support for the idea reached the highest levels of government. The U.S. Department of Education under the Clinton administration funded a joint project between NEA’s initiative and SRI International dedicated to “the cross-fertilization of ideas and practices between charter schools and other public schools.”

Only four NEA charters opened, one of which was the Kwachiiyoa (pronounced koo-chee-OH-ah) Charter School in San Carlos, California.

The word kwachiiyoa comes from the Kumayaay people of the San Diego area and is loosely translated to mean “everyone a learner, everyone a teacher,” which became the school’s motto. 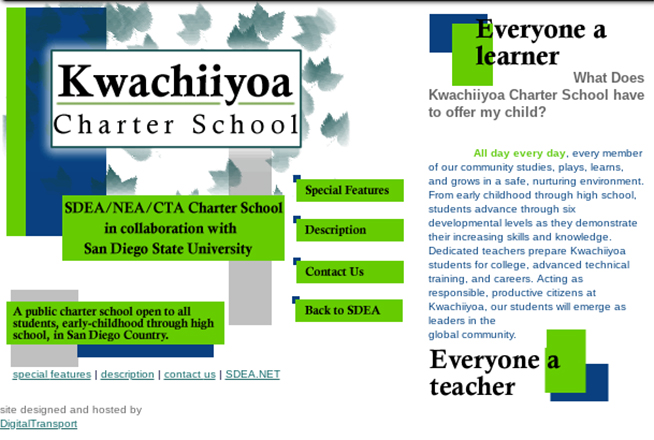 The school was designed to serve some 450 elementary students and was originally scheduled to open in September 1997. But like many charter schools, particularly at the time, it had difficulties securing a location. Kwachiiyoa ultimately found a home at the former Cleveland Elementary School campus, which in 1979 had been the site of the notorious “I don’t like Mondays” school shooting.

Kwachiiyoa opened in September 1999, ostensibly with the full support of NEA, the California Teachers Association, the San Diego Education Association, the local school board and the teachers college at San Diego State University. The San Diego Union-Tribune called it “perhaps the most enthusiastic charter school launch the city had seen.”

By design, the school had no principal. It was to be run by a 12-member governance council consisting of six teachers, two parents, two community partners, one education support employee and one student. “The governance structure of Kwachiiyoa Charter School is based on the philosophy that teachers are professionals whose voice in school management and operations is essential to achieving academic goals,” read a school goals document. Goal No. 1 was “high student achievement.”

In keeping with its design as a laboratory for cross-fertilization with district schools, Kwachiiyoa was to “help to prepare new teachers for the district and will also help veteran teachers prepare for certification by the National Board for Professional Teaching Standards.”

The school began with approximately 200 students. Its nine teachers all had state teaching credentials, and most had a master’s degree. They averaged 11 years of teaching experience. Class sizes were the same as or lower than the district average.

The staff was unfailingly positive about the school’s mission, as shown in this promotional YouTube video and in its initial school accountability report from March 2000.

Three years later, Kwachiiyoa was the lowest-performing of the 121 schools in the San Diego Unified School District. It ranked lowest even when compared with other California schools with similar student socioeconomic backgrounds. For the 2002-03 school year, Kwachiiyoa was forced into a state intervention program for underperforming schools.

When it came time for the charter’s renewal, the union disappeared from the picture. The teachers tried to proceed with a new charter application without union support, but the district denied it based on the school’s record.

In a masterpiece of understatement, the San Diego school board concluded that “it is evident that the instructional program included in the original charter petition is not satisfactory.”

It would be inaccurate to blame this outcome on the implementation of the unions’ ideas, since the school board learned that the unions “had little or no involvement in the operations of the school in the prior chartering term.”

After noting that participation by the local union and San Diego State University was one of the primary reasons for approval of the original charter petition, the board discovered that virtually no collaboration had taken place. The teacher professional development program was never created, much less instituted.

The board mentioned that the original school director had been removed, but did not say by whom. Nor was she ever replaced, leading to herculean efforts by three teachers who, on top of their classroom duties, assumed administrative and financial responsibilities for the school.

Not surprisingly, they “had failed to maintain adequate financial records and adhere to commonly accepted accounting practices.” The district concluded that the “lack of school leadership clearly contributed to this breakdown of fiscal control and to the failure of the school’s academic program.”

Kwachiiyoa teacher Rhonda Schwartz summed it up succinctly when she told the Union-Tribune, “Somebody birthed this school and then they left us in the cold.”

Kwachiiyoa closed and another charter school was granted the site, though eventually the district sold the property and a developer turned it into homes.

The other three NEA charters remain open to this day, though they had trials and tribulations with the union at the time of their founding.

The president of the NEA local in Colorado Springs, who championed the CIVA Charter School, was subjected to a recall petition by her own members, though it ultimately failed.

NEA’s local affiliate in Norwich, Connecticut, and the Norwich school district both rejected the establishment of an NEA charter, so the national union appealed to the state and formed a new local specifically for the charter school. Unions usually insist that the local school district be the approving authority.

Teachers at the NEA charter in Hawaii wanted to join traditional school teachers on the picket line when they went on strike in 2001, but the union told them they couldn’t because they were employees of the school and not of the state.

None of the charters has a formal union connection anymore.

The United Federation of Teachers charter school in New York City has had similar difficulties. UFT was forced to shut down its K-8 charter school for poor performance and a host of administrative problems. The school was criticized for failing to enroll English learners and special needs students — a charge the union often levels at other charter schools. UFT continues to operate a charter high school whose performance is mixed, to be generous.

“Everyone a learner, everyone a teacher” was an appropriate slogan for the Kwachiiyoa failure. The unions thought to teach us about what makes a successful school but learned that it really wanted nothing to do with the responsibility.