Union Report: Top NEA Leader Promises a Progressive ‘Uprising,’ but Is He Part of the Establishment Problem? 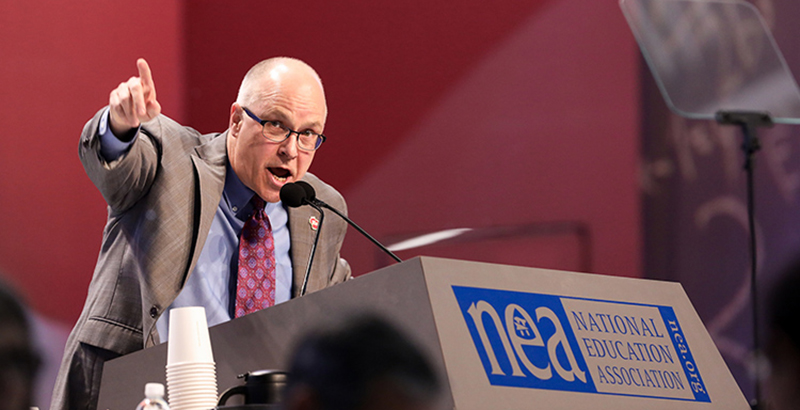 John Stocks is the executive director of the National Education Association. He is arguably more powerful than the union’s president, who is constrained by term limits.

Stocks was in northern Idaho last month to deliver a speech to the Idaho Conservation League. This isn’t as strange as it seems: Stocks served a term in the Idaho legislature in the late 1980s and still has many contacts throughout the state.

In his speech, Stocks predicted “a tremendous resurgence of people who are going to take back their country.”

“I assure you, in a relatively short period of time, there will be an uprising,” he said. “[It] will in fact fuel a more progressive future. That’s what’s going to happen. When it happens, we need to have the infrastructure in place to take advantage of it.”

Stocks announced this at the Hayden Lakes Country Club amid “a sumptuous catered dinner” and no-host bar. Club membership is $20,000 with monthly dues of $457. The job application to work there states: “If employed, I understand that I have been hired at the will of the employer and my employment may be terminated at any time, with or without reason and with or without notice.”

Stocks was not totally unaware of his environment. “I suspect many in this room have tremendous privilege,” he said. “I know I do, as a white male heterosexual, tremendous privilege, coming from a family that was upper-middle class.” He called on the audience to use their privilege to stand for justice.

It may take a while for the progressive revolution to reach Hayden Lakes, but Stocks has long been committed to achieving it elsewhere. In a 2011 profile no longer available online, his former business partner was quoted as saying: “I wouldn’t be surprised if he walks in there with a 20-year plan in his pocket. And it won’t be limited to the NEA. He’ll be leveraging the NEA to remake America in his progressive vision.”

Stocks may see himself at the forefront of a progressive movement, but he is also a Democratic Party insider. He was instrumental in manipulating the NEA endorsement of Hillary Clinton in the 2016 primaries to shut down supporters of Bernie Sanders. He forwarded a confidential NEA memo to the Clinton campaign after the NEA board voted to endorse her.

Stocks also serves as board chair of the Democracy Alliance, “the largest network of donors dedicated to building the progressive movement in the United States.” After Donald Trump’s victory in 2016, one Democratic strategist said of the group: “You can make a very good case it’s nothing more than a social club for a handful of wealthy white donors and labor union officials to drink wine and read memos, as the Democratic Party burns down around them.”

I don’t know if there will be a progressive uprising. But uprisings of any sort usually do not bode well for those with privilege, money, and power, a group to which Stocks assuredly belongs.