Union Report: L.A. and Oakland Teachers Ended Their Strikes With Very Different Settlements — but Long Term, the Results Are the Same 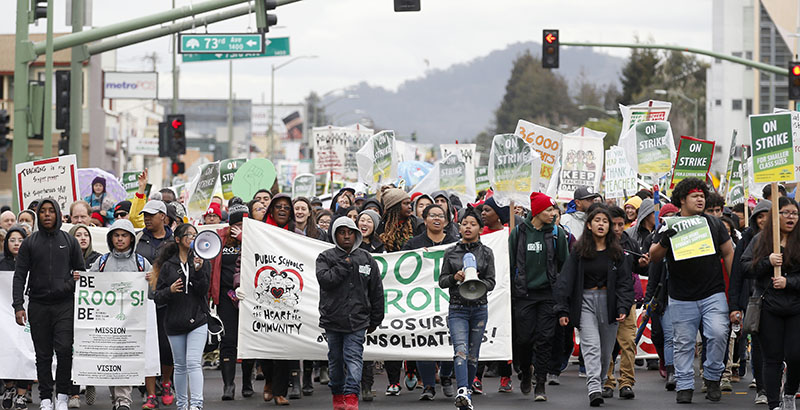 The Oakland teacher strike came to an end after seven days with another “historic” contract agreement.

As was the case in Los Angeles, the previous Oakland contract had expired in June 2017. The strike lasted the same amount of time. Both were settled after mediation by outside parties.

Both settlements included a promise to vote on a non-binding resolution calling for a moratorium on charter school expansion that expires at the beginning of the 2019-20 school year.

But there were significant differences, too. Class size limits emerged as the defining issue in L.A., but salaries took the primary position in Oakland. The settlements reached reflect that distinction.

United Teachers Los Angeles eliminated the waiver to maximum class size that existed in its contract, but it will take until 2022 to reach the class sizes the union negotiated in 2015.

Both of these reductions are modest, but they will require hiring more teachers and staff. How many depends on whether the current enrollment declines in both districts continue unabated.

The salary increases reached in L.A. and Oakland are remarkably different, not just in amount but in structure.

UTLA chose to accept its increases retroactively — a 3 percent raise effective July 2017 and another 3 percent effective July 2018. The union built a salary reopener into the three-year deal, but as it currently stands, Los Angeles teachers are not guaranteed any additional increases to the salary schedule through the 2021-22 school year.

The Oakland deal went the opposite way. Teachers received no retroactive pay until January 2019, when a 3 percent raise kicked in. Another 2 percent will be added in January 2020. The balloon payments come the following year, with a 3.5 percent increase in January 2021 and another 2.5 percent in June 2021.

To further complicate a comparison, Los Angeles teachers lost seven days of wages while out on strike, which is being deducted from their monthly paychecks in installments. On the other hand, the Oakland Education Association negotiated an immediate 3 percent “bonus,” which almost covers the lost wages due to the strike. In effect, Oakland paid the teachers for striking.

Despite the different settlement structures, the effect on the average teacher in L.A. and Oakland over time is similar — to a point.

What all this signifies is a little easier to understand. Both districts have severe financial problems. Los Angeles bought labor peace with retroactive raises and relied on “a leap of faith” to fund the increased staffing that class size reduction will require. Oakland instead paid wages for the strike days and got away with only small pay increases this year and next.

But Oakland paid a big price for punting its problems two years down the road. School board president Aimee Eng admitted the deal was structured “creatively,” telling KTVU that the district will have to find more revenue to pay for the final increases.

Since the state provides most of the money for K-12 education, all Californians will be on the hook for obligations district administrators have made without the funds to pay for them. Hold on to your wallets.