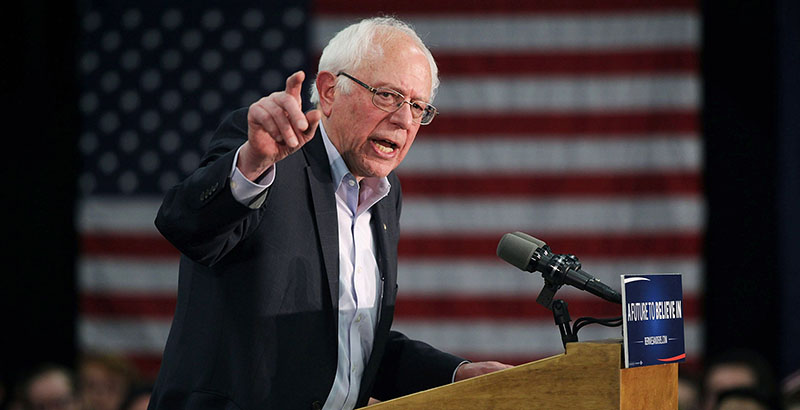 For the next few weeks, United Teachers Los Angeles will conduct a campaign targeted at its own members. The goal is to persuade them to approve an endorsement of Sen. Bernie Sanders for the Democratic Party’s nomination for president of the United States.

Chapter leaders will participate in an up-or-down advisory vote on the Sanders endorsement Nov. 13, followed by a formal endorsement vote by the union’s house of representatives the next day.

The union calls this “the most open and democratic process that UTLA has ever engaged in for an endorsement.” However, no other candidates will be considered.

Certainly it is not surprising that a public employees union would want to endorse Sanders, who openly supports labor and UTLA in particular. What is unusual about the union’s action is its assessment of the national Democratic Party.

In the latest issue of United Teacher, the union’s member newsletter, President Alex Caputo-Pearl makes some extraordinary statements about Democrats and the last two Democratic presidents.

“By supporting unregulated growth of a vastly anti-union charter sector, Democratic Party leadership has undermined the pay, job security, and working conditions of educators, a job dominated by unionized women. Another attack on its base.

“Even if we defeat Trump, the Democratic Party will not address the most important issues in education without radically changing its approach. Bill Clinton did perhaps more to start charterization than any other president. Barack Obama doubled down on that with support for charters, standardized testing, competition for scarce funds through Race to the Top, and more.”

Caputo-Pearl summarily dismissed the other two current front-runners — former vice president Joe Biden and Sen. Elizabeth Warren. “Joe Biden is cut from the same cloth as Obama on education. Elizabeth Warren has 45 policy plans, but none on public education,” he wrote.

Warren did release an education plan after United Teacher went to press, and it’s a veritable wish list for unions, at an estimated cost of $800 billion.

As with his process for endorsing a candidate, Caputo-Pearl’s assessment of how the results will play out is devoid of alternatives.

I can think of a few more “worst results.” Maybe Sanders becomes the nominee and gets trounced in the general election. Or maybe Biden or Warren wins the nomination without UTLA and thus feels no obligation to the union, like maybe what happened in 2008 with Obama.

I think it is likely that the union will endorse Sanders, not because the members overwhelmingly prefer him to other candidates, but because unions don’t hold endorsement votes they think they might lose.

Whether UTLA’s endorsement of Sanders will give us better government is open to debate. Certainly, we will get more government if he wins.