Union Report: Bargaining for the Common Good Is Neither Common Nor Good. But It Makes for Great Public Relations 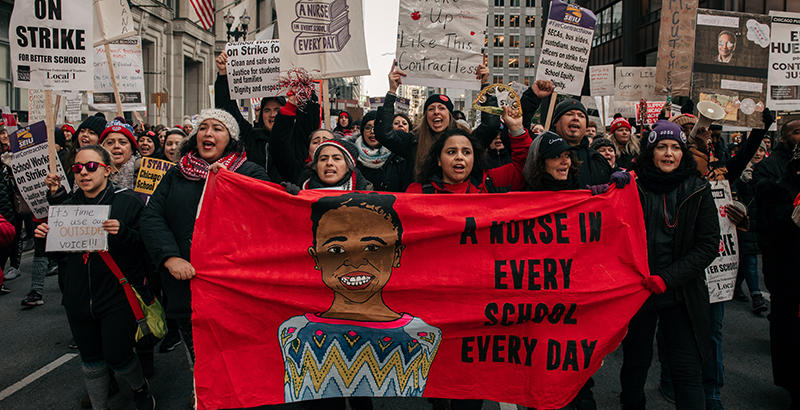 Have you heard? Teachers unions are no longer interested in negotiating only the salaries, benefits and working conditions of their members, but affordable housing, restorative justice, climate change and a host of other social issues as well.

Unions call this “bargaining for the common good” and have parlayed the concept into positive — to the point of fawning — media coverage. As a public relations exercise, it has to be considered a resounding success, but our press outlets repeatedly overlook the flaws in the argument that public employee contracts are the proper place to address public policy issues.

The phrase arose from a 2014 conference organized by Georgetown University’s Kalmanovitz Initiative for Labor and the Working Poor. The conference included 130 public-sector union activists, community organizers, academics and researchers, there by invitation only, “to address the threats posed by financialization, privatization, growing income inequality and retirement insecurity to the lives of public-sector workers and the well-being of the communities they serve.”

So a conference devoted to the common good launched behind closed doors with a handpicked group of activists and union members, and those only from the public sector.

In August 2014, CNN Money noticed the idea and ran a piece headlined “Are labor unions on the rise?” that heavily relied on information provided by the Kalmanovitz Initiative. The next month, Bargaining for the Common Good launched its website under the auspices of the initiative, the Action Center on Race & the Economy and the Rutgers University Center for Innovation in Worker Organization.

Unions were awakened from their slumber by the U.S. Supreme Court’s Janus ruling, which ended the practice of public-sector unions extracting agency fees from nonmembers. No longer able to count on automatic financial support, these unions now had to actively recruit and appeal to new members.

The National Education Association began to offer training to its activists on bargaining for the common good, and the spate of teacher walkouts in 2018 helped boost the notion that the unions’ actions were for public benefit. The Los Angeles and Chicago teacher strikes of 2019 resulted in a flood of stories about how salaries and benefits were secondary concerns of the union, after the priorities of students, parents and the community.

I can find no reporter who asked pointed questions about the whole approach. For example:

Who elected union officers and representatives to bargain for the common good? No one outside the union was permitted to vote for or against Alex Caputo-Pearl in Los Angeles or Jesse Sharkey in Chicago. The unions’ bargaining teams were made up entirely of union members. How many community groups were involved in putting together the list of demands and — more important — how many were not involved?

Or: Were all the participants in choosing the common good equal partners, or did some views carry more weight than others? Who were the business owners? The run-of-the-mill taxpayers? Were there representatives of the homeless population? After all, additional spending for school counselors, or nurses, or restorative justice coordinators could affect the city’s outlays for their services.

But the biggest flaw in the concept and the media coverage is their complete disregard for the other bargainers. That is, if the union is bargaining for the common good, what is the other side of the table bargaining for?

This isn’t minimum-wage workers battling wealthy CEOs and huge multinational corporations. This is public employees battling the people’s elected representatives. I’m more cynical about government than most anyone, but the whole idea of mayors and school boards is to represent the common good against the massive host of parochial groups hoping to use the power of government to further their own interests.

This isn’t always sinister. It’s part and parcel of our system of government. Some people want crime reduction. Some want better health care. Some want the potholes in the road repaired. Some want smaller class sizes. Some (gasp!) want charter schools. Desires are infinite and resources are finite, so we have an imperfect system where most of the adult population elects people to set priorities. They adjust over time and according to various pressures applied.

“Common good” and “private good” can also overlap. Smaller class sizes and more counselors might be good for students, but they are also good for the union, resulting in more members.

I’m skeptical of anyone who claims to want only the common good, but if I have to choose, I’ll take the folks whom a majority of the voting population picked at the ballot box over any group — teachers unions included — with such an obvious self-interest.