Union Report: A Los Angeles Teacher Strike Seems Inevitable. Does the 2012 Chicago Walkout Hold the Key to a Solution? 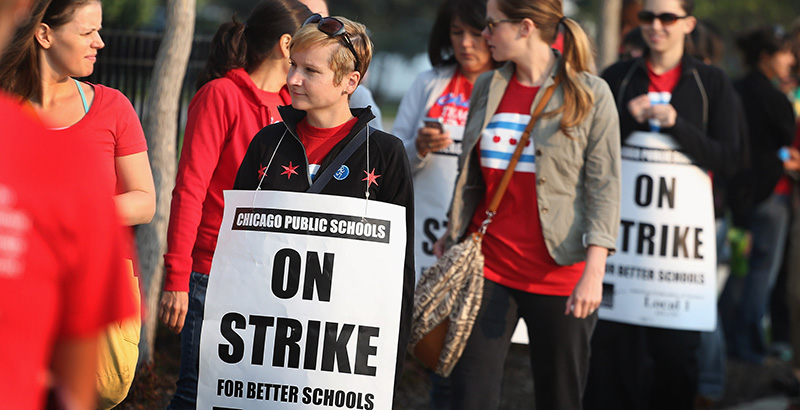 Leaders of United Teachers Los Angeles continued their preparations for a strike by approving the transfer of up to $3 million from the union’s strike fund to its general fund to be ready for immediate use.

The first mediation session is scheduled for Sept. 27, with neither the Los Angeles Unified School District nor the union expressing optimism about prospects for success.

There have been no new proposals reported since the union submitted a 69-page “last, best and final” offer July 24.

This leaves most of us wondering what it will take to settle the dispute. Naturally, we are all focused on the disparity in wage proposals, with the district offering a 2 percent increase and a 2 percent one-time payment, and the union demanding a 6.5 percent increase retroactive to July 1, 2016.

But the union’s public relations campaign refers only obliquely to the specific salary offers, centering instead on portraying the district as being “led by pro-privatization ideologues” who believe in “corporate greed … even if it means destroying public education.” UTLA President Alex Caputo-Pearl has said that “the war over public schools is a class war.”

If that isn’t just rhetoric, a raise alone won’t alter the situation one bit. In order to reach a settlement, Caputo-Pearl and union leaders must deliver to their members not only a substantial pay increase but a victory against the forces of evil.

The district, on the other hand, emphasizes its financial situation, referring only in passing to union proposals to increase its influence over testing, staffing, and magnet schools.

Both the money and the cause will have to be addressed in negotiations. Fortunately, we have a model to use to evaluate how this might work out: the Chicago teacher strike of 2012.

That strike is still seen as a watershed moment for teachers unions. Books have been written about how “a labor conflict focused solely on compensation at the start developed into a challenge to a national education reform movement that, teachers charged, was systematically destroying public education and using Chicago as its test case.”

Salary issues were nearly settled prior to that strike. Chicago Teachers Union President Karen Lewis told local press the two sides were “not far apart on compensation.” The union ultimately settled for a three-year contract with a cumulative 7 percent raise, which is not exactly an unprecedented increase.

The union described the settlement of non-monetary issues in an interesting way, declaring victory in terms of defense. “We stopped many harmful ‘reforms,’” the union’s settlement summary reads. “The district was forced to give up on merit pay, forced to accept steps, made to abandon a 7 hr 40 minute teacher day, and gave ground on test-based evaluation. In fact, the board began the bargaining process by proposing to cut our contract to just 30 pages.”

Additionally, the union admitted it lost on some of those issues. “Despite the strike and broad public support, there were some cuts that we could not stop, such as the move to a longer day and year, the elimination of Pension Enhancement (PEP), and stiffer penalties for low ratings,” according to the summary.

In short, the Chicago Teachers Union strike was important and influential because of the strike itself, not the settlement achieved due to the strike. This suggests that a teacher strike in Los Angeles is probably inevitable, but that a settlement might not be quite so unreachable as it currently seems.

The bad news is that money will be the deciding factor. I suspect no agreement will be reached without “6.5 percent” written somewhere in it. The retroactive date might disappear, some of the raise might be conditional, and some cooperation in seeking help from the state might emerge, but United Teachers Los Angeles won’t end a strike for an offer similar to what the administrators and support employees got.

The sort-of-good news is that if the money is acceptable, the union will probably compromise on its non-monetary demands, and post-strike will instead emphasize district proposals that it shot down. It won’t satisfy all the activists, but the union can then focus its energy on the elections and the composition of the school board.

There will be a lot of press attention and a lot of extravagant pronouncements during and after a Los Angeles strike, but the ultimate result will be higher pay for teachers and a school system not noticeably different from what it was before the walkout.

Los Angeles citizens are along for the ride.