Support The 74 and stories like this one. Donate Today!
Analysis
Listicle

Allegations of harsh, “no excuses”–style discipline have long dogged charter schools. Now a new report by UCLA’s Civil Rights Project seems to confirm some of these concerns. The group’s press release, published Wednesday, claims that “Study Finds Many Charter Schools Feeding ‘School-to-Prison Pipeline.’” The same night The Huffington Post proclaimed: “Charter Schools Are Suspending Kids More Than Other Schools, And That’s A Problem.”
But a closer look at the UCLA data paints a much more nuanced picture: Charter schools have significant disparities in suspensions by race — but that difference is quite similar to disparities at traditional public schools. In some cases, charters suspend students of color at higher rates than non-charters; in other cases charters had lower suspension rates. There is also published evidence, not acknowledged in the report, that “no excuses” charter schools generally produce large student achievement gains.
The UCLA report is a valuable contribution to the growing school discipline debate, but its limitations should also be addressed and taken seriously. Four things to consider:
1
Apples-to-apples comparisons prove challenging

The UCLA study is descriptive, as researchers would say, meaning it reports the data, rather than explains it.

In this case, the data show that charter schools on average have slightly higher rates of suspension than non-charters: 7.8 percent versus 6.7 percent. This is a small but real difference.

But why does that difference exist? Is it because charter schools are more likely to have zero-tolerance discipline policies? The report can’t really answer these questions, but it does, to its credit, disaggregate the data in a way that helps. In the chart below, we see that when comparing students of the same race in secondary schools, charters suspend higher numbers of students with disabilities, black students and Asian students than non-charters. But charter schools actually have lower suspension numbers for other groups, including Latinos and students learning English. As the report itself says, “Charter schools are not consistently higher-suspending than non-charters for every subgroup, and that, whether higher or lower, the differences between the types of schools are not large.” 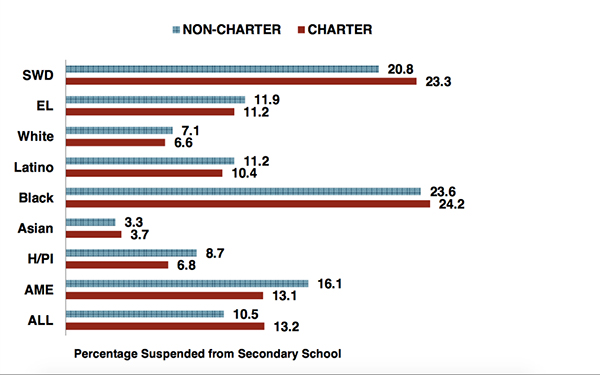 As the report notes, having a certain student population is not a justification for having higher suspension rates, but when trying to understand differences between charters and district schools, it’s crucial to take those factors into account.

Regardless, it is clear that both types of schools have problems with disproportionate discipline for certain student populations. It’s less clear that this problem is significantly worse in charter schools.

2
Suspension rates can vary based on research approach
The UCLA report relies on data from the U.S. Department of Education’s Office of Civil Rights. The researchers find that charter schools were especially likely to report zero suspensions, sometimes contradicting state numbers1. The authors reasonably conclude that these numbers might not be reliable, and so simply exclude all schools at the secondary level — charter and non-charter — that report no suspensions2.
Again, this may be an appropriate methodological choice, but it is important to note that the numbers look somewhat different when zero-suspension schools are not excluded. As can be seen in the chart below, charters come out with lower suspension rates than non-charters in most subgroup comparisons when zero-suspension schools are included3.

Source: UCLA Civil Rights Project
3
Beware media reports that fail to address the limitations of this research
The report has other important limitations that it generally acknowledges, but that don’t always make it into media reports.
For instance, the data comes from school year 2011–12, so is somewhat dated, though is the most recent available. The data also does not differentiate by length of suspension, so one that is two weeks long is treated the same as a suspension that lasts only one day, or partial day.
In some respects, the report may understate the charters’ effect on suspensions. For example, students who attend charter schools may be different than those attending traditional public schools. Moreover, charter schools generally serve fewer students with disabilities, particularly those with severe disabilities. This again points to the challenge of getting at apples-to-apples comparisons.
Looking specifically at a few cities, analyses of Boston and New York City have found that charter schools there have significantly higher suspension rates than the cities’ district schools. A sophisticated study of Massachusetts’ urban charters found that they did in fact cause an increase in school suspensions by about one day each year in middle and high school4.
On the other hand, the large expansion of charter schools in New Orleans has actually coincided with a decrease in suspensions over the long run. And Washington D.C. charters have a lower suspension rate than traditional public schools.
4
The existing research on discipline is more mixed than the UCLA report suggests
The UCLA report speaks confidently about research on different discipline approaches: “As many independent studies indicate…there are effective evidence-based alternatives to harsh discipline available that not only decrease overall rates of disciplinary exclusion and reduce racial gaps in school discipline, but also are associated with higher achievement, improved graduation rates, and an increased sense of safety.”
This statement is correct in many respects: higher suspension rates are associated with worse outcomes at both the school and student level. There is also strong evidence that implicit bias by teachers lead to lower expectations and harsher discipline for students of color.
But the suggestion that high suspension rates cause less safe or lower achieving schools, albeit plausible, is on shakier ground. This is your classic correlation vs. causation problem: Some studies have found that school suspensions harm all students by contributing to a toxic school environment, while other studies show that higher suspension rates can actually help increase student achievement.
The research literature on “no excuses” charter schools — which, admittedly, is a somewhat underdefined term — suggests that they produce large test score gains, and may have positive long-run outcomes. Research from Massachusetts showed charters that embraced a strict discipline approach saw significant student achievement gains. A separate study of New York City charters showed similar results. In Boston, charter students were more likely to enroll in four-year, as opposed to two-year, colleges. Perhaps these gains are outweighed by concerns about discipline or perhaps they would persist with less punitive discipline policies, but it’s important to be clear about these potential trade offs.
None of which is to say that charter schools’ discipline policies are good or ideal. The racial disparities, at both charter and non-charter schools, are large and clearly should be addressed. Alternatives to suspension may very well be preferable for promoting positive school cultures and for keeping students in class.

Many districts and charter schools across the country appear to be trying to improve on this front (we’ve covered a few here), but the UCLA report spotlights the fact that schools in both sectors have a long way to go. But policymakers, pundits and the mainstream press should also recognize the limitations of this report, and steer clear of the suggestion that high suspensions rates are a problem unique to charter schools.

1. Zero is used if the data is missing or incomplete, further complicating comparisons. (return to story)

2. This amount to an exclusion of about 9 percent of non-charters and 17 percent of charters. (return to story)

3. Readers may wonder how it’s possible in this chart that charters appear to have lower subgroup suspension rates than non-charters, but a higher overall suspension rate. This is known in statistics as Simpson’s Paradox. In this case, charters serve student populations — particularly black students — who are more likely to be suspended regardless of whether they attend a charter or non-charter school. This again points to the challenge of making comparisons between suspension rates at charter and district schools. (return to story)

4. Notably, there was no difference in suspensions between Massachusetts’ non-urban charters and district schools. (return to story)