If colleges, universities and the managers of public government programs got serious about graduating more single mothers pursuing a degree, the ripple effect on individual incomes — plus state and federal coffers — would be enormous, a new collection of reports shows.

Providing childcare just for the period during which all single mothers are in class — an estimated cost of about $14 billion — is projected to lead to societal benefits of $89 billion from increased wages and less reliance on public aid due to more single moms earning degrees or staying in college longer.

Roughly 10 percent of the country’s college students are single mothers, totaling around 1.7 million students. The rates vary by state, from around just above 7 percent in California to more than 11 percent in Arizona and Texas. Nationally, more than a fifth of college students have children.

The package of reports, released last month, consists of a main publication highlighting national trends, a detailed methodology explaining how the authors arrived at their numbers, and a profile for each state to put the national picture in a more local perspective.

“Our study set out to estimate the economic benefits of investing in single mothers’ educational success,” said Lindsey Reichlin Cruse, study director at IWPR and lead author of the reports. (The lead on developing the data methodology was another study director, Jessica Milli.)

“I think when you’re able to make a dollars-and-cents argument, it speaks to the folks who manage our budgets, who set our budgets and who determine how tax dollars are spent,” Reichlin Cruse said.

Part of the inspiration for the report is that graduation rates for single mothers are comparatively much lower than they are for women without children attending college. Just 8 percent of single moms earned associate’s or bachelor’s degrees after six years in the most recent set of data; 50 percent of women without children did the same. (For married mothers, the figure shot up to 19 percent.)

“Originally we set out to focus on the single mother population because so little work focuses explicitly on single mothers, particularly single mothers who’ve enrolled in college,” Reichlin Cruse said. The package of reports “really articulates that this is an effective use of investment to reduce spending and increase tax revenue down the road.”

In a key section, the report calculated how much spending on childcare, financial and “case management” — a robust form of advising, mentoring and connecting students to local services — would be necessary to provide adequate services to all current single mothers. It then estimated the national return on investment on that spending based on more single mothers earning a degree or spending more time in school. 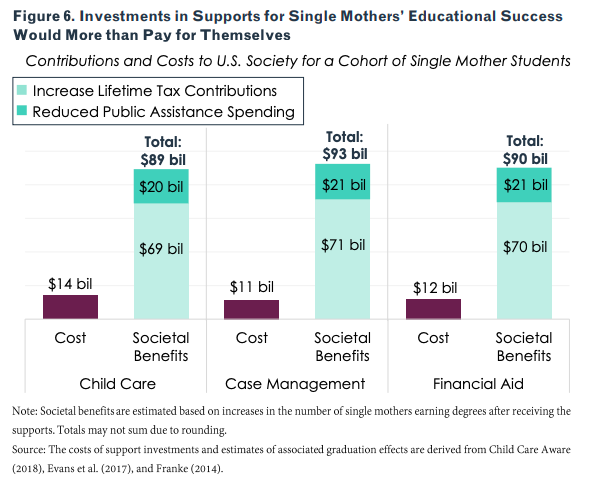 If every single mother in college received case management services for the time they’re in class, a cost of about $11 billion, the degree-attainment rate would increase by 47 percentage points. The societal gains from that investment would be $92.5 billion.

The estimate was based on previous studies that looked at actual U.S. programs that provided such services to students and the impact the added spending had on student success.

One 2017 study found that graduation rates for female community college students tripled — a 31-percentage-point increase — when they received case management services at Trinity River Campus of Tarrant County College in Fort Worth, Texas. Unlike other advising services in which one staffer oversees the academic progress of hundreds of students, this one had trained social workers with caseloads of 34 students. The work involved “mentoring, coaching, referrals, and limited access to emergency financial assistance,” according to the 2017 study.

A similar estimate suggests that $90 billion in societal benefits would result if every single mother received an additional $2,000 in financial aid while in school — at a cost of $12 billion. That’s based on a previous study showing graduation rates going up by as much as 2.8 percentage points for every $1,000 in additional financial aid.

While it may be tempting to combine the impacts of each individual service — childcare, case management and financial aid — the authors warn against doing so because each estimate of societal returns is based on students receiving just that one service listed, rather than all three together. Reichlin Cruse said more research into how these services work in tandem with one another “would help policymakers and institutions make informed investments that can effectively improve student parents’ college success rates.”

To be sure, the upfront costs to earning a degree are substantial for single mothers. Still, the investment pays for itself multiple times over. Taking into account tuition and fees, books and supplies, time lost to work because of studies, and childcare while in school, single moms pursuing a bachelor’s pay $56,000 but see a rate of return of $7.77 for every dollar they spend on their education, according to the report. These cost estimates don’t include financial aid single mothers are likely to receive, but it also doesn’t include loans students would have to take out and the annual interest payments on them.

The authors of the report were careful with their earnings assumptions to consider the unique circumstances of single mothers that impact their likely future wages, even with a degree. For example, single mothers take longer to earn a degree, so they’ll enjoy less time with the higher earnings power that comes with completing college. The analysis “takes into account the fact that single mothers are more likely to graduate to gender and racial pay gaps,” Reichlin Cruse said.

The policy recommendations in the package of reports apply to both institutions and governments. Colleges could loosen their grading policies to permit students who are parents to turn in assignments after official due dates if they had experienced a childcare emergency. States could limit the restrictions they place on public assistance for student-parents attending college.

Examples include “removing work requirements, not limiting the types of degree programs that student parents can pursue, not putting time limits on the amount of time they can receive assistance while they’re in education,” Reichlin Cruse said. “There are a number of obstacles that still exist in a number of states around the country that make it really hard for parents to receive assistance for care while they’re in college.”