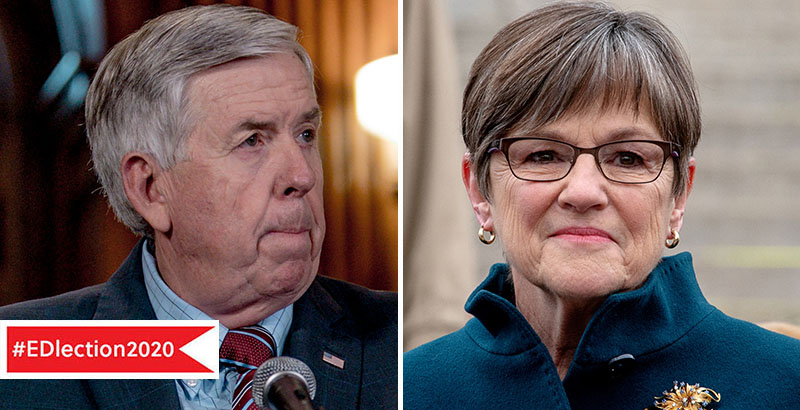 Two autumn deadlines are approaching that will help determine the political future of state and local leaders around the United States. One is the beginning of the 2020-21 school year, now only weeks away for most states. The other is Election Day, November 3.

Just as parents are discovering how their children have adjusted to the biggest learning disruption in American history, they’ll be asked to choose among politicians seeking to mitigate its effects. And while the presidential election will continue to monopolize public attention heading into the fall, 11 states will also hold gubernatorial elections.

Among them is Missouri, where incumbent Republican Gov. Mike Parson’s re-election prospects are looking shakier by the day. His Democratic opponent, State Auditor Nicole Galloway, has hammered his response to COVID — which saw Parson criticized for being both tardy in ordering businesses closed and precipitous in encouraging them to reopen — as clumsy and inadequate, and although most expected the governor to ride President Trump’s coattails to victory, polls have shown the race tightening over the past month.

Across the Kansas border, Gov. Laura Kelly has run into political troubles of her own. She won’t run for a second term until 2022, but the governor’s approval rating is slumping as local officials have stymied her attempts to delay in-person school reopenings. The Democratic leader of a ruby-red heartland state, Kelly has found herself boxed in by a Republican-dominated legislature and an elected school board that seeks to defer to local districts on pandemic-related decisions.

Both states are considered safe bets to support Trump in November, even if not by the towering margins he enjoyed in 2016. And both are seeing some of the most worrisome COVID numbers in the country, according to recently released federal data. But in terms of partisanship, Kansas and Missouri are experiencing different realities at the moment.

Bob Beatty, a political science professor at Topeka’s Washburn University, said that Kelly will face much greater challenges than Parson in guiding her state through the new school year. Democrats in Kansas have few allies and innumerable vulnerabilities when attempting to guide state policy, he said.

“It’s not like being a Republican governor in Missouri,” he said. “[Democrats] have to be much more careful because they’ve got that legislature that can come in and pass a new law to take away all your power.”

Research from the White House’s coronavirus task force made clear that the two midwestern neighbors have experienced a summer surge in infections. The report, dated July 26, grouped both Kansas and Missouri among 21 “red zone” states mostly clustered in the American South and Southwest. To earn that categorization, a state needed to see 100 or more new cases per 100,000 residents over the preceding week.

Overall, Missouri has seen nearly twice as many COVID cases and more than three times as many deaths as Kansas, according to data from the Centers for Disease Control and Prevention. The cause lies partly in geography: While both states include huge swaths of rural and agricultural areas, Missouri is also home to several large cities where density has helped the disease spread faster.

“Missouri has a much bigger problem than Kansas in having Kansas City and St. Louis, very densely populated areas where the virus can hit quickly and cause big damage,” Beatty said. “So there’s potential there for the governor to be very supportive of opening schools — we’ve seen it in other Republican-led states — and then having a disaster hit, which could of course impact his electoral fate.”

Even as cases have risen, however, Gov. Parson and other leaders have held off on issuing statewide orders around mask-wearing or social distancing practices. In the past few months, the governor lavished praise on the president in a White House meeting and repeatedly has been photographed in public settings without a mask.

After the president loudly demanded that public schools open their doors for in-person instruction, Parson adopted a similar message in Missouri. In a much-publicized radio interview in July, he argued that “kids gotta get back to school.” If they contracted COVID-19 while in the classroom, he added, “they’re not going to the hospitals, they’re not going to have to sit in doctors’ offices; they’re going to go home, and they’re gonna get over it.”

Brian Kisida, a professor of education at the University of Missouri, said that Parson had adopted a political strategy of closeness to the president, who carried the state handily in 2016.

“Anytime Trump has visited the state, or when he’s issued a directive, Parson seems to be right there chiming in,” Kisida said. “That’s been true with the coronavirus and reopening the schools; it’s been true with his lack of issuing any kind of mandate around wearing masks. He’s very aligned with Trump and seems to be hanging his political future on the Trump approach to reopening schools.”

In that respect, the governor is no different from many other Republicans who have tied their re-election hopes to the president’s own campaign. But while Parson is still favored to prevail over Galloway in a little less than three months, recent polling has shown the two in a statistical dead heat. The state auditor has also more than doubled the incumbent’s fundraising totals over the last quarter, pulling in more than $1 million in contributions even with the pandemic canceling live donor events. Parson is in a weaker position than most incumbents because of his unusual route to high office; he was elected lieutenant governor in 2016, only to ascend to the top job after Gov. Eric Greitens resigned due to scandal a few years later.

After his earlier remarks provoked national consternation, Parson made a point of convening with district heads in suburban St. Louis to hear their concerns around reopening. And while he has vocally encouraged schools to welcome students back into the classroom, Parson has made it clear in recent weeks that he won’t put pressure on individual districts, as governors have in other red states. Ultimately, Kisida noted, he hadn’t seen any “heavy-handed” tactics from the state.

“What I’ve seen so far in Missouri has been a fair amount of deference to local school districts. I believe that the state response has acknowledged and even encouraged a mix of responses that suit local needs.”

In Kansas, Gov. Kelly has attempted to wield more direct authority over reopening decisions, only to find herself frustrated by competing powers in state government. After seeing COVID cases rise throughout the summer, Kelly issued an executive order July 20 calling for schools across the state to push back in-person classes until Sept. 8. But the edict was overruled by a 5-5 vote from the state’s elected Board of Education, which had to give majority approval in order for it to take effect.

It was the latest turnaround in a push-pull battle for influence over the state’s pandemic response. As a Democrat, Kelly faces steep Republican majorities in both chambers of the state legislature, as well as an electorate that last voted for a Democratic presidential candidate in 1964. The state is, simply, one of the most Republican-leaning in the country, and Kelly’s own approval rating on the issue of the pandemic has sunk from 68 percent in April to just 50 percent at the end of July.

Mark Tallman, the associate director of the Kansas Association of School Boards, told The 74 that the state’s conservative residents had become leery of the wide-ranging orders used by Kelly at the beginning of the crisis to close schools and mandate the wearing of face masks. Those powers, while “certainly legal,” were unprecedented, he argued, and had begun to rankle local voters and officials alike.

“The reaction over time was one of saying that it was too much centralized control,” he said. “A lot of the opposition was simply saying, ‘Why are we having statewide closures of business and other activities in places that haven’t had a case yet?’”

That dissatisfaction led state lawmakers to pare back Kelly’s emergency powers, effectively giving Republicans in the legislature and state Board of Education veto power over decisions around the enforcement of social distancing in schools and businesses. Though critical of the new law, the outnumbered Kelly had little choice but to sign it.

Medical authorities have pointed to the success of state-led COVID mitigation efforts. Counties implementing mask orders, for example, have seen faster declines in infection rates than those without such rules. And school districts in Topeka, Lawrence, Wichita and many Kansas City suburbs — accounting for a significant portion of public school enrollment across the state — have announced that they will voluntarily set their reopening dates back to Sept. 8 or later.

Many teachers have voiced grave concerns about the prospect of returning to in-person instruction too soon. But families are divided over whether to begin the new school year online. Especially in more rural counties that have seen few or no coronavirus infections, parents are eager to have children back in classrooms.

Even in the absence of a governor’s race, state politics have proven tumultuous this summer. In legislative primaries on Aug. 4, a group of moderate Republicans who were more inclined to work with Kelly were unseated by more-conservative opponents. After analyzing more than 100 primary ads that aired on Kansas television, Beatty said that only a handful mentioned the pandemic specifically. Those that did emphasized local frustration over state overreach.

Still, he added, Kelly was exercising her influence in the only way she could. Although the governor’s executive orders have become “in a sense, recommendations,” they still shape the responses of local authorities.

“She has said that she’s going by the science, which essentially says that COVID doesn’t recognize the difference between Wabaunsee County and Wyandotte County,” Beatty said. “She made her orders based on that, and what she might argue is that there may be a county out there that wants to reopen schools, but it’s in a part of Kansas where it’s going to be tough. And they can say, ‘The state board recommends against opening, and the governor does.’ That provides even more cover, though it probably ticks off a number of people.”