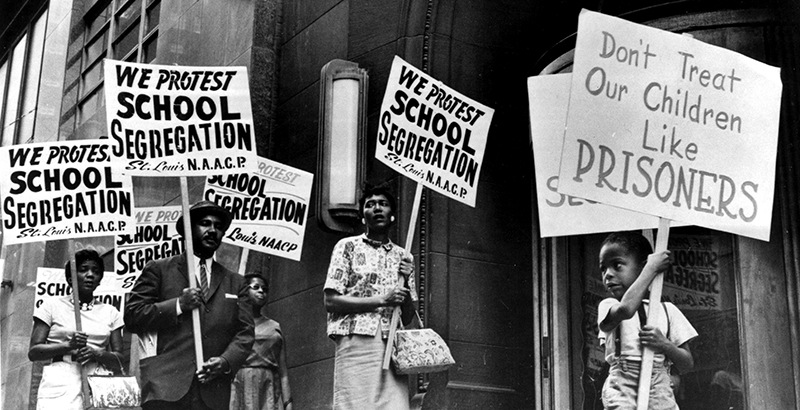 Demonstrators, a young boy among them, picket in front of a school board office in protest of segregation, St Louis, Missouri, in the early 1960s. (PhotoQuest/Getty Images)

My parents were married in Conecuh County, Alabama, on June 13, 1954. Less than a month earlier, the U.S. Supreme Court had issued the landmark ruling that outlawed segregated public schools. My mother remembers feeling confident that their future children would never have to matriculate in inferior facilities, never have to watch school buses full of white children pass them by, never have to live in the shadow of the lie that was “separate but equal.”

Alas, her dreams were dashed. She had misunderstood how Southern officials would misuse the unfortunate phrase “with all deliberate speed” to their advantage. As anyone with a marginal grasp of American history knows, the South resisted. And resisted. And resisted. The first of my parents’ four children, I attended segregated public schools for all of my elementary and most of my high school years. The public schools in my hometown, Monroeville, Alabama, did not fully desegregate until 1970.

So I came of age under the harsh lash of Jim Crow. It affected not only my educational opportunities but also my parents’ livelihoods: They were both educators — my father was a principal, my mother a teacher — and they were both paid less than their white peers in the same positions. That was the law of the land, and it didn’t change just because the Supreme Court ruled that it must.

The idea that black children and white children might sit beside one another in a public school classroom was so upsetting to those comfortable with the status quo — so stunning to those whites cemented in their notions of racial superiority — that Brown vs. Board set off a rash of reactions around the South that had little to do with education. It was in 1956, for example, that the state of Georgia incorporated the Confederate battle flag into its official state flag — an act widely viewed as a rejoinder to the court’s ruling. (In 2003, Georgia finally adopted a new flag without the St. Andrew’s cross and stars.)

That was also the year in which U.S. Congressman Howard Smith of Virginia introduced what became known as the “Southern Manifesto,” a fiery document urging white Southerners to resist school desegregation and the “chaos and confusion” he insisted it would inspire. His manifesto was signed by 82 representatives and 19 senators, all from states of the Old Confederacy.

With that sort of official encouragement, white citizens went about evading the law with fierce determination. There were those protests that drew national press coverage, such as the mobs that greeted the desegregation of public schools in Little Rock. But the ruling also provoked more subtle reactions that received little press attention but which, nevertheless, had far-reaching consequences. In cities and small towns across the South, for example, white citizens started private schools that had one aim: remaining exclusively white. Those “seg” academies still exist. Though Monroeville is the hometown of Harper Lee — who wrote To Kill a Mockingbird, the classic tale of racial justice denied — the founders of the town’s seg academy, Monroe Academy, were not moved by her message. It has never had a black student.

Certainly, the idea that black children might finally be given a good education inspired some of that backlash. For centuries, Southern states had labored to ensure that most of their black citizens were not properly educated so they would be equipped only for low-paying, menial jobs. (During slavery, some Southern states went so far as to outlaw teaching black people to read and write.)

While the history of legally sanctioned disparities in funding is well-known, a look through archival records provides grim and startling detail. My mother and my aunt, also a retired school teacher, dug up minutes from an August 14, 1934, meeting of the Monroe County (Alabama) Board of Education, 20 years before the Brown decision. The annual budget for schools was adopted during that meeting.

Adding perversion to prejudice, black citizens were expected to raise money for their own schools and share it with the schools’ governing body. “The customary action of the Board regarding negro [sic] school supplement was ordered continued. Under this plan each community is requested to raise $40.00 per teacher unit. One-half of which amount is to be turned into the county school treasury,” according to minutes from the meeting.

The resistance to the Brown decision ensured that black students continued to attend facilities that were glaringly inadequate for years after the ruling. Many all-black schools lacked science labs, decent gymnasiums and modern cafeterias. Some struggled with restrooms that did not meet public health codes.

As a seventh-grader, I made my first venture into journalism by writing a news story for the school paper about one of the decrepit buildings on the campus of the segregated high school I then attended, Union High. Writing for the “Unirama,” I highlighted a wooden classroom building across from the main campus that was used by seventh-grade classes. Among other deficiencies, it had a gaping hole in the porch that students had to step over to enter the front door. The exposure helped: The hole was quickly repaired.

For all the humiliations of Jim Crow, segregated “colored” schools presented a few compensations. In my childhood, public education was still supplemented by both racism and sexism. Because the brightest and best of black college graduates had limited opportunities in the job market, particularly in small towns, many of them taught school. Several of my teachers were bright, energetic and nurturing. They did their best with limited resources.

Finally, as I prepared to enter the 11th grade, Monroe County submitted to complete desegregation. As happened across the South, though, white authorities retained control, dictating how resources would be allocated, positions designated, facilities used. Many black schools were simply shut down, and many black principals and teachers lost their jobs. (My parents kept theirs.)

In “The Costs of ‘Brown’: Black Teachers and School Integration,” published in the Journal of American History, Adam Fairclough wrote of the losses suffered by black teachers and black communities.

“In Alabama, the number of black principals declined from 210 to 57, in Virginia from 170 to 16. In the eyes of many blacks, the process of integration was tainted by the fact that ‘the power to control desegregation was placed in the hands of those who fought so hard to retain segregation.’ As the retired Louisiana high school principal Cyrus Jackson put it, ‘The powers that be … said, “The [n-word]s want integration, but they’re going to have integration on our terms,”’” Fairclough wrote.

Perhaps that was the price that had to be paid in the towns, such as mine, that finally accepted desegregation peacefully. I spent the last two years of my high school career at Monroe County High School, where my graduating class was about evenly divided between black students and white. There were no riots, no National Guard troops, no interruptions.

But there was no genuine acceptance of the new social system, either. The high school held no prom in my junior or senior year. Black kids and white kids held separate formal dances off campus. And the willingness of most white parents to even send their children to the same schools eroded over time. After about 20 years, schools in Monroe County began to resegregate, as they did in much of the country. The battle for educational equity continues.

Cynthia Tucker Haynes is a Pulitzer Prize–winning syndicated columnist and a popular radio and television commentator. Her weekly column, which appears in newspapers around the country, focuses on political and cultural issues, including income inequality, social justice and reform of the public education system.