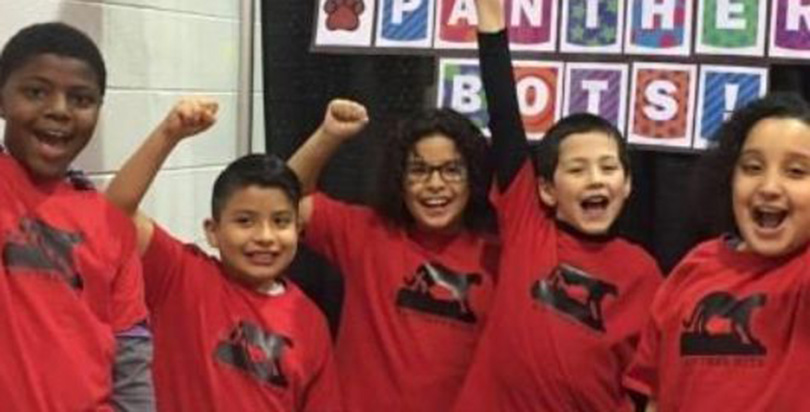 It’s certainly true that the cruel treatment of the Indianapolis PantherBots is another troubling vestige of President Donald Trump’s America. But that doesn’t tell the whole story. For generations, children of color have been subject to prejudices that stunt their academic growth.
After the PantherBots’ victory in a local robotics contest in February, the group of black and Latino fourth-graders were greeted with racist taunts and jeers from some of their competitors — and their parents, according to published reports. As they were leaving the competition, the team from Pleasant Run Elementary School were confronted in the parking lot by losing team members, who yelled, “Go back to Mexico!”
Parents of the PantherBots recounted that they had heard similar taunts from adults before the competition was over. As Diocelina Herrera, the mother of PantherBot Angel Herrera-Sanchez, told USA Today, “They were pointing at us and saying, ‘They are Mexican, and they are ruining our country.’ ”
This, unfortunately, is no isolated incident. Trump, whose campaign was fueled by xenophobia and racial resentment, has done little to tamp down the bigotry of many of his supporters, who see his victory as vindication for their benighted attitudes.
The Southern Poverty Law Center’s survey of 10,000 educators reported that 90 percent said Trump’s campaign had a negative effect on the racial climate at their schools.
(The 74: Make Our Schools Safe Again: 500 Scary Incidents (and Counting) of Election-Inspired Bullying at School)
Across the country, there have been reports that Latino athletes have been taunted with the ugly jeer, “Build the Wall!” Muslim high school girls have had their hijabs ripped off their heads. At one high school in California, a white student handed out fake deportation notices to students of other races the day after Trump’s victory.
But let’s not blame all of this on the rise of Trumpism. The simple truth is that students of color have struggled against the “bigotry of low expectations” for generations. Black and brown children who achieve academically do so despite the implicit and unspoken biases of many teachers and administrators, who simply do not believe that they can excel.
(The 74: Tucker Haynes — Why ‘Hidden Figures’ Should Be Required Viewing at Every U.S. School)
A recent Yale University study found that teachers are already holding negative unconscious beliefs about children of color as early as preschool. That research found that both black and white teachers harbored prejudices that affected their expectations and their approach toward discipline.
That makes the rise of the PantherBots — who comprise two black and three Latino students from a school in a poor neighborhood — all the more extraordinary. As one of their advisers, second-grade teacher Lisa Hopper, put it: “For the most part, the robotics world is kind of a white world. They’re just not used to seeing a team like our kids. And they see us and they think we’re not going to be competition. Then we’re in first place the whole day, and they can’t take it.”
Still, after the parking-lot confrontation, the PantherBots were undaunted, according to Hopper. “They said: ‘We know they are mean. We know they were jealous. We’re not going to let it bother us.’ One of our guys said ‘to take stuff like that and let it make you stronger,’ ” she told USA Today.
Indeed, they did just that. They went on to win a spot in the Vex IQ World Championship in Louisville next month. Their GoFundMe page has already surpassed its goal of raising $8,000 to help them get there.
That’s wonderful news, but it’s also worth remembering that the reason the PantherBots got their chance to shine was because of a grant given to low-income schools by the TechPoint Foundation for Youth. The foundation is dedicated to giving groups not well-represented in STEM — girls, minorities, and low-income students — exposure and the opportunity to try their hands in these fields.
The group is privately funded but works closely with the Indiana Department of Workforce Preparedness and the Indianapolis mayor. Trump’s proposed budget cuts funding both to after-school programs and to career and technical education.
(The 74: Trump Calls for New School Choice Initiatives, Big Cuts to K-12 Budget)
Here’s hoping the PantherBots continue to surprise their detractors with their stellar accomplishments and that other PantherBots-in-the-making get the chance to discover their gifts.
Submit a Letter to the Editor
March 20, 2017