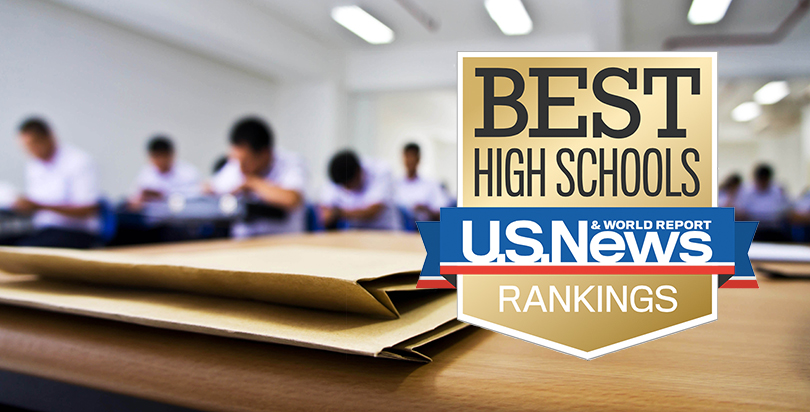 Editor's Note: Kipp Academy Charter School, which Cynthia Tucker Haynes cites in her column below, was one of four New York City KIPP high schools that U.S. News & World Report said it had removed from its 2017 Best High Schools National rankings because of a data reporting issue.

If you are looking for evidence that public charter schools are excellent alternatives for many students, don’t stop at the top of the recent rankings compiled by U.S. News & World Report. While it’s true that six of the top 10 public high schools on its list are charters, several of those schools serve a relatively affluent — and so easier to educate — population, as charter critics would quickly point out.

Arizona’s BASIS schools, for example, which claim five of the top 10 spots on the list, tend to cater to upscale white kids. They also educate a significant population of students of Asian heritage — many of them kids from affluent immigrant families.

So don’t stop there. Keep looking.

Check out Number 20 on the list, New Haven’s Amistad Academy (Achievement First Amistad High School), rated the best public high school in Connecticut. Sixty percent of its students are black; 36 percent are Latino. Sixty-nine percent qualify for free lunches, while another 12 percent qualify for reduced-priced lunches. Yet 63 percent are proficient in English, easily beating the state average of 50 percent. One hundred percent of them have taken Advanced Placement classes, and nearly half have passed.

At that rate, some of them may eventually be bound for Yale University, New Haven’s hallowed Ivy League institution, which has generally shut out poor kids from surrounding neighborhoods.

Check out Number 23 on the U.S. News rankings, KIPP San Jose Collegiate. Its student body is 77 percent Latino. Fifty-six percent of the students qualify for free lunches, while another 17 percent qualify for reduced-priced lunches. Still, 77 percent of its students are proficient in math, and 69 percent are proficient in English. U.S. News rates the school as the fourth-best public high school in California.

As part of its methodology, U.S. News assesses a school’s disadvantaged students — black, Hispanic, and low-income — and whether they performed at or better than the state average for the least-advantaged students.

Check out Number 29 on the list, New York City’s KIPP Academy Charter School (KIPP NYC College Prep High School), located in the Bronx. Its student body is 44 percent black and 54 percent Latino. Eighty-seven percent of them qualify for free lunches, and an additional 13 percent qualify for reduced-priced lunches. Yet, they are excelling, and U.S. News rates the school as the fourth-best public high school in New York state.

For all the criticism that the traditional-school lobby continues to heap on public charter schools, the evidence keeps stacking up in their favor. The stellar ratings from U.S. News came despite charters still representing a small sliver of public schools.

Of the 50 million or so public school students nationwide, charters educate only an estimated 3 million. And the latest rankings come atop a raft of data from education researchers, who have pointed out in several studies over the past few years that charter school students often outperform their peers in traditional public school settings. From Los Angeles to New Orleans to Washington, D.C, charters have proved a boon to children in poorer neighborhoods who needed an escape from failing traditional schools.

That has not quelled the critics, of course. They claim that charters use exclusionary methods to cream off the best students. Recently, Carol Burris, executive director of the Network for Public Education, a nonprofit founded by the unrelenting school reform critic Diane Ravitch, savaged the BASIS charter school network in a March opinion column published in The Washington Post.

It is certainly true that it is easier to educate students whose parents have advanced degrees and who are from affluent homes overflowing with books. But the problem of economic and racial segregation is hardly confined to charter schools.

Would that Burris worried as much about traditional schools that are working hard to keep out poor kids of color.

Across the country, public schools, unfortunately, are re-segregating. Parents in poor neighborhoods find it difficult to break through the barriers — lack of transportation, school zoning regulations, complicated enrollment systems — that keep their children out of top-rated public schools. Would that Burris worried as much about traditional schools that are working hard to keep out poor kids of color.

Other measures that charter school critics find exclusionary are also widely practiced in magnet schools, several of which ended up faring well in the new U.S. News rankings. Take Dallas’s School for the Talented and Gifted, which places fourth in the nation. It requires students to apply and a high grade point average is a prerequisite.

May there be more — many more — such schools.