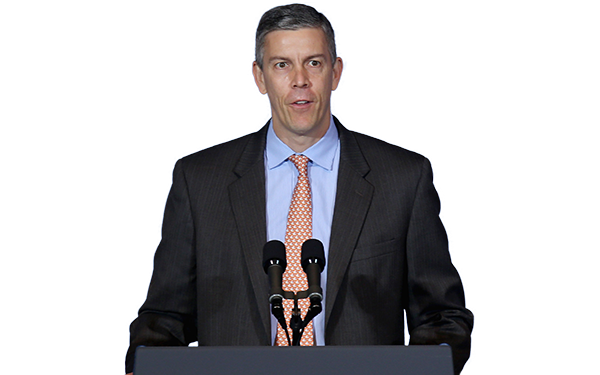 While fact-checkers have disputed the claim, the Rev. Jesse Jackson used to frequently say that there were more black men in prison than in college.

It’s likely that statistic was never quite accurate. Nevertheless, there is an alarming truth in the sentiment, one that Education Secretary Arne Duncan pointed out in a speech at the National Press Club on Wednesday: “One out of every three black men in America is predicted to go to prison at some point in their lives — one in three — while just one in five of them receives a bachelor’s degree,” he said. (Read The Seventy Four’s full coverage of Wednesday’s speech)

That’s simply unacceptable. And Duncan has a proposal to help shut down the schools-to-prison pipeline. He called on states to divert millions from their prison budgets to give raises to teachers in schools that serve disadvantaged students. “If our states and localities took just half the people convicted of nonviolent crimes and found paths for them other than incarceration, they could save upwards of $15 billion a year. If they re-invested that money into paying the teachers who are working in our highest-need schools … they could provide a 50 percent average salary increase to every single one of them.”

It’s a brilliant idea, but only if those raises go to the best teachers. You won’t elevate academics in low-performing schools — and you won’t alter the life trajectory for millions of impoverished students — unless you give them excellent teachers. Just giving raises to all the teachers currently in those schools compounds the problem.

Here’s an ugly little secret: The worst teachers are rarely fired. Civil service protections and union contracts make it too difficult to get rid of them. They are merely shunted off to schools in poor neighborhoods, where parents don’t have the social capital or the political sophistication to complain.

Research has borne that out time and again. A recent study in Washington state showed that students of color, academically challenged students and low-income students got fewer good teachers, as measured by experience, teachers’ scores on basic- skills tests and value-added (measuring student growth not just test scores) evaluations.

That data echoed other findings. A 2013 study of 29 school districts revealed that students who receive free or reduced- school lunches (an indicator of poverty) are more likely to be taught by less-effective teachers than their more affluent peers.

But the less-skilled principals and teachers aren’t given pink slips. They are quietly moved to poor neighborhoods, where parents don’t complain. That’s an outrageous abuse of students who are already disadvantaged. Those kids need excellent teaches even more than their wealthier counterparts.

In his speech, Duncan didn’t explicitly tie his call for higher pay to teacher evaluations. But he clearly intends for those increased salaries to provide incentives for “more strong teachers (to) go to our toughest schools.”

One way to do that, he suggested, is for school districts to “create five positions at each of those high-poverty schools for accomplished teachers who’d mentor their peers” and get a $25,000 a year raise.

That’s an excellent idea — if those teachers receive evaluations that take student performance into account.

President Obama and his education secretary have put in place several incentives to encourage states to adopt serious and practical standards for teacher accountability, including evaluations tied to student performance. But teachers’ organizations have fought the idea vociferously.

Unfortunately, they seem to be winning. The Senate rewrite of No Child Left Behind would seriously weaken accountability, jeopardizing the work Obama started. (The House version so weakens the federal role in education that the president has threatened a veto.)

You’re likely to hear teachers heap praise on Duncan’s call for higher pay for those working in disadvantaged schools. And there’s no doubt that highly effective teachers in impoverished classrooms deserve more money.

But raises ought to go only to those teachers who can really make a difference in the lives of poor kids. If we’re serious about shutting down the schools-to-prison pipeline, we’ve got to get serious about raising the standards for teachers.