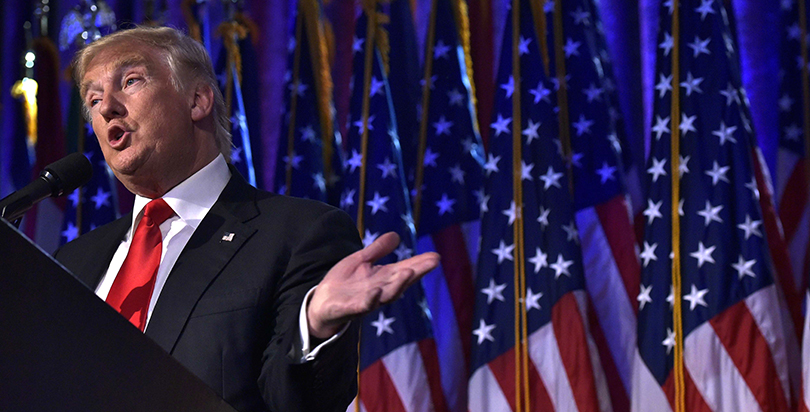 Donald Trump did not make education a centerpiece of his presidential campaign, but he has an agenda that, if enacted, would have profound effects on our nation’s schools: He has promised to gut Common Core, support local control and expand school choice.

In some respects, paradoxically, Trump has vowed to empower local communities by expanding federal power.

Common Core is the perfect example. Trump has called the academic standards a “disaster” and “education through Washington, D.C.” He’s said, “We’re getting rid of Common Core.” The irony, though, is that the only way for Trump to do so would be through the very type of federal power he’s criticizing.

(The 74 Flashcards: Understanding the Common Core: What It Is, What It Isn’t)

The standards, which are currently in use in most of the country, were adopted state by state, so it would be impossible for the president to unilaterally repeal them, as many have already have pointed out. What the feds might be able to do is dangle federal dollars in front of states that agree to abandon the Common Core — a reverse Race to the Top of sorts. Of course, this is exactly the tack — much criticized by conservatives and libertarians and essentially echoed by Trump — used by the Obama administration to incentivize adoption of the standards in the first place.

During the campaign, Trump also proposed a $20 billion school choice program using federal money. Once again, this runs headlong into his promise to abolish the Department of Education and promote local control of schools. A federal program would have to be administered by a federal agency, presumably the Department of Education, and it could undermine local school boards or state legislatures that oppose school choice initiatives.

Of course, in the real world, a policy agenda does not have to be internally consistent. Trump may very well go about undermining local decisionmaking in a bizarre attempt to restore it. In other respects, the Trump vision is much clearer: He seems unlikely to support federal rules designed to ensure equitable distribution of school funding or efforts to reduce the use of exclusionary school discipline practices like suspensions and expulsions.

Less apparent is where a Trump administration would stand on requiring states, under the Every Student Succeeds Act, to give schools summative ratings, such as letter grades, as the Obama administration has proposed. Although this would appear to undermine local control, Trump’s vice president–elect, Mike Pence, supported school grades when he was governor of Indiana.

(The 74: What Happens When a School Gets a Failing Grade? It Gets Better)

It also remains unclear how much Trump’s administration will want to focus on education and how much flexibility it will have under ESSA, which moves more authority to states. In particular, the law limits the Education Department’s ability to influence states’ academic standards, including Common Core in particular.

President Barack Obama was able to produce massive education policy reforms by getting Congress to allocate money through the economic stimulus in 2009, at a time when states were desperate for cash. It seems unlikely that Trump will have the will or the circumstances to push changes on the same scale.

What is obvious is that Trump will not be able to keep all his campaign promises on education. He can’t eliminate the Department of Education and create a new program under it. He can’t restore local control by undermining states’ decisions to adopt the Common Core. He and his administration will have to choose.