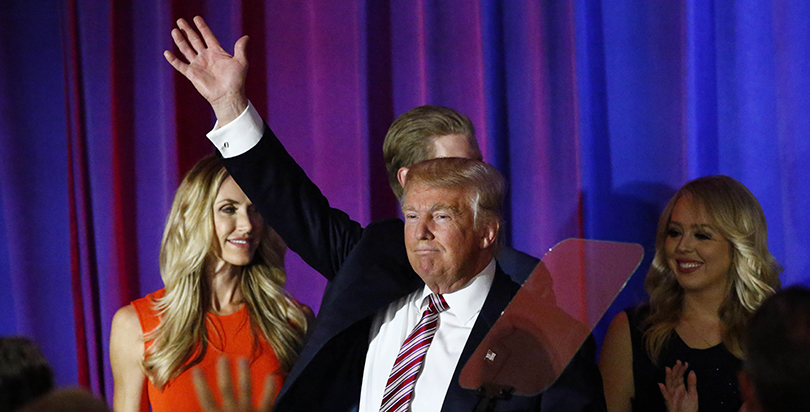 The mystery is over – sort of.
Republican presidential nominee Donald Trump Thursday afternoon gave his first major policy address on education, calling for a $20 billion federal school choice program for children who live in poverty.
“Not only would this empower families, but it would create a massive education market that is competitive and produces better outcomes, and I mean far better outcomes,” Trump said at a charter school in Cleveland.
(More on Thursday’s speech: Why Is Donald Trump Visiting a Failing Charter School?)
Before endorsing choice as the solution to many of the nation’s educational problems, Trump spent 18 minutes criticizing Hillary Clinton’s handling of private emails while secretary of state and defending in unusual detail his assertion, which media reports have shown to be untrue, that he opposed the U.S.’s entering the Iraq war.
The main section of the speech, his most substantive on education by far in the campaign, came a week after what his advisers had said would be “education week,” a calculated pivot that makes sense given his polling deficits with minority voters and some of the traditional GOP base.
Trump said he would “reprioritize” $20 billion in existing federal spending for school choice. While specifics would be left to each state, block grant funding would favor states that have charter schools and private school choice laws, he said, and money would follow students as they moved among public, private, charter, and magnet schools.
“Our government spends more than enough money to easily pay for this initiative with billions and billions of dollars to be left over,” Trump said.
The $20 billion would be targeted at 11 million children in the country who live in poverty. At about $1,800 per child, the money would be far from enough for private school tuition. If state politicians chipped in an additional $110 billion from existing state education budgets, he said, the total would come out to roughly $12,000 per low-income student.
“I’m confident that the politicians will not be able to suppress the will of the people anymore. It’s too much, too strong,” Trump predicted.
Characteristically, the Republican contender failed to provide many details, such as where in the federal budget he would find $20 billion to reprioritize or how he’d recommend that states move around those extra billions.
It’s possible that the sum might include what is currently the largest portion of federal K-12 spending, about $15 billion, distributed under Title I to support the education of low-income children. The other $5 billion is a mystery.
Previous GOP plans have also called for packaging Title I and several other smaller federal programs into a similar school choice block grant, but none have been successful.
It also isn’t clear what would happen to states and schools that receive federal money under Trump’s plan but don’t adopt the choice policies he says would be required. Would, say, West Virginia, which has no charter law but a childhood poverty rate over 26 percent, lose the millions it currently receives in Title I dollars for low-income children?
Trump also said he would create a “pilot program” for any “inner city” that wants to provide school choice for its students. (As with the federal program, Trump didn’t explain how that would work — for instance, how city leaders could join such a program if state lawmakers don’t provide tax dollars for what would amount to an expensive experiment.)
Trump also pledged to use the presidential bully pulpit to encourage states to adopt school choice laws and sway voters to elect candidates that favor the policies to local, state, and federal office.
“As your president, I will be the nation’s biggest cheerleader for school choice,” he said.
He also said he’d push for merit pay for educators, and he continued his critique of Common Core, arguing that the standards don’t work because the U.S. is not number one in world education rankings.
Thursday evening, Hillary Clinton’s campaign panned Trump’s choice proposal, saying it could gut funding of 56,000 schools serving 21 million children for vouchers the Clinton camp said don’t show evidence of improved academic performance.
The plan would “decimate public schools across America and deprive our most vulnerable students of the education they would deserve,” Clinton adviser Maya Harris said in a statement.