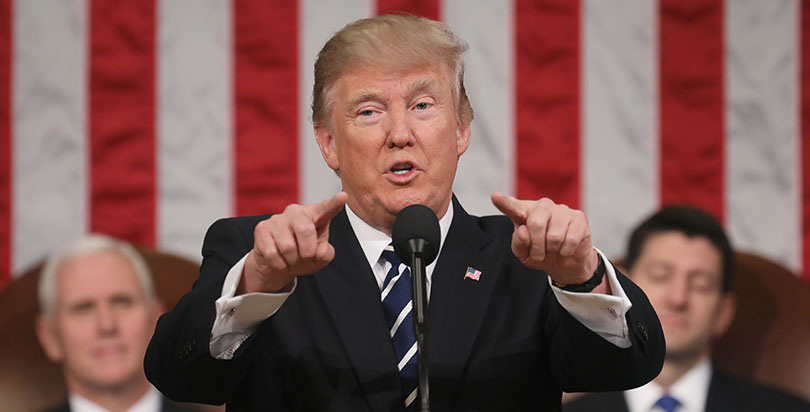 In his first speech before Congress, President Donald Trump doubled down on his core education policy: school choice.
"I am calling upon members of both parties to pass an education bill that funds school choice for disadvantaged youth, including millions of African-American and Latino children," Trump said. "These families should be free to choose the public, private, charter, magnet, religious or home school that is right for them."
Trump called education "the civil rights issue of our time," echoing both presidents Obama and Bush.
In the speech, Trump offered no specific details about what he would do to expand school choice, but on the campaign trail he proposed a $20 billion program that would allow low-income students to spend federal dollars on the school of their choice, including private options.
Emphasizing the issue was one of Trump's chosen guests, Denisha Merriweather, who used Florida's tax-credit scholarship program to attend a private school and was sitting next to First Lady Melania Trump in the gallery.
"As a young girl, Denisha struggled in school and failed third grade twice. But then she was able to enroll in a private center for learning, with the help of a tax-credit scholarship program," Trump said. "Today, she is the first in her family to graduate, not just from high school, but from college. Later this year, she will get her master’s degree in social work."
Merriweather has written about her experience for The 74 and The Hill and has said that the opportunity to attend a private school "turned my life around." Merriweather, who works part time for the group that administers Florida's tax-credit scholarship and with special needs children for the Duval County public schools, also attended Education Secretary Betsy DeVos's confirmation hearing in support.
“I’m confident that if (school choice opponents) would stop and listen to the thousands of school-choice alumni like me, they would learn that if we truly care about breaking the cycle of generational poverty, we need all hands on deck,” she wrote in her essay for The 74. “We can’t afford to take any options off the table.”
Merriweather's experience may not be representative of most students who use vouchers or tax credits. Recent research has found that students attending private schools through vouchers see large reductions in achievement in Louisiana, Ohio, and Indianapolis. Many existing vouchers programs also allow private schools to discriminate against students on the basis of religion or sexual orientation.
Other research indicates that public schools improve in response to competition from vouchers. Older studies have found that students attending private schools through vouchers are more likely to graduate high school and attend college and those choice programs produce higher rates of parental satisfaction.
Trump’s statement are in line with the perspective of DeVos, a longtime advocate and heavy funder of efforts to expand school choice, often focusing on allowing families to tap into public dollars for private school tuition. Since being confirmed DeVos has continued to emphasize choice as her signature issue, which at times has roiled controversy, including Tuesday after she described historically black colleges and universities as “real pioneers when it comes to school choice,” without mentioning such schools were borne out of racial segregation.
DeVos immediately praised Trump’s speech in a statement.
“Tonight, President Trump delivered on his promise to support school choice and offer students access to quality options,” she said. “No child, regardless of their ZIP code or family income, should be denied access to quality education.”

Tonight’s #JointAddress reaffirmed our commitment to giving parents a choice and giving students a chance.

Prior to her confirmation, DeVos repeatedly vowed to respect local control of schools — promises that proved crucial to some senators who voted for her — though it’s not clear how this will fit with the school choice plan Trump championed Tuesday.

Politico previously reported that the new administration is considering advancing a choice plan though the tax code. Such tax credits plans, which exist in a handful of states, provide tax breaks to groups or individuals that donate to nonprofits that provide scholarships for students to attend private schools. The programs are financially similar to vouchers, but usually avoid legal issues regarding separation of church and state.
(The 74: Title I Portability, Grants, Tax Code Changes — The New Opportunities for Federal School Choice)
Trump’s plan will likely face fierce opposition from a number of groups. Despite linking his plan to civil rights, national civil rights organizations have long opposed voucher programs, and the NAACP recently called for a ban on new charter schools.
Trump can also expect opposition from teachers unions, Democrats, and even some Republicans, especially those from rural states where school choice options are few. Lindsey Burke, of the conservative Heritage Foundation, recently told Politico that she has reservations about a federal program.
“School choice is already moving along swimmingly in the states,” Burke said. “We don’t want to over-convolute the tax code and there’s concern that this could get over-regulated.”

#Schoolchoice is great, but should not be federal unless u want fed regulation of all schools. Federalism matters #Catoreacts #jointaddress

Although polling results and reported support for school choice varies heavily depending on the exact wording, when put on the ballot, voucher programs have usually lost. An effort to expand choice through the recently passed federal education law, the Every Student Succeeds Act — by allowing federal funding to follow low-income students rather than be directed to high-poverty schools — was voted down in the Senate last year.

The Dick & Betsy DeVos Family Foundation provided funding to The 74 from 2014 to 2016. Campbell Brown serves on the boards of both The 74 and the American Federation for Children, which was formerly chaired by Betsy DeVos.
Submit a Letter to the Editor
February 28, 2017