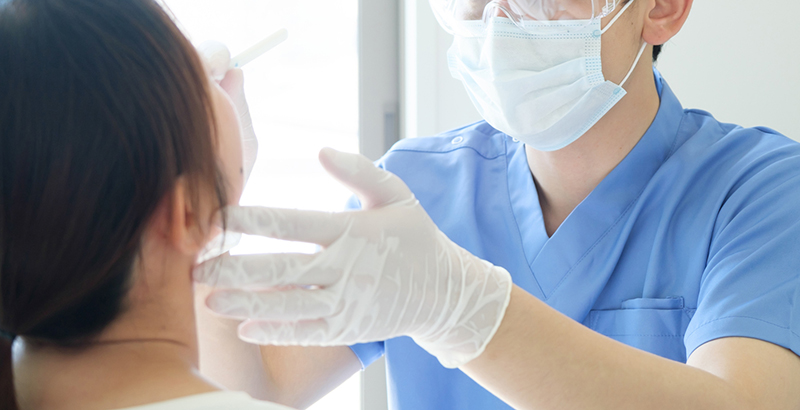 As San Antonio schools continue to reopen, the inevitable presence of COVID-19 has educators and parents on edge — and with public resources lacking, some schools are using private funds to fight the pandemic.

Public schools, which have focused heavily on mitigation strategies like PPE and social distancing on campus, are depending on the City’s Metropolitan Health District to help them fight the pandemic, even though over the summer the health district was criticized for lags in contact tracing, and rapid tests have yet to become available at City-run testing sites.

But at least one district and one private school are relying on private resources to bolster testing and contact tracing capacity. In Somerset ISD, a small high poverty district in southwest Bexar County, philanthropic funding has allowed for universal weekly screening of students and staff through rapid testing. Saint Mary’s Hall, a private school on the city’s north side, has deputized an in-house contact tracing team—and hired an epidemiologist to train some of them—using more thorough protocols than Metro Health.

Their proactive investments point to an obvious gap between what private and public funds can provide, but also something more pernicious: a trust gap. Public school systems are struggling to convince Black and Latino families to send their children back to the classroom, and unions question whether districts and public health departments can keep teachers and staff safe at work.

Both Saint Mary’s Hall and Somerset ISD are trying to make students, parents and teachers feel safe by going a step further. But that doesn’t mean they are going too far.

“Testing and contact tracing are what allow you to get a true picture of the situation on the ground,” said William Greendyke, an infectious disease doctor and hospital epidemiologist in New York City said. Ideally tests need to be turned around in 24 hours and contact tracing should begin immediately upon confirmation. “If you don’t have the resources to do that then you need to be more conservative.”

By conservative, Greendyke means slow to open – and many San Antonio area public schools have not been.

While some schools have adhered to Metro Health guidance and brought back only 20 percent of students, others are nearing capacity. None of the Metro Health recommendations are legally binding. According to the State, they cannot order schools closed unless there’s an outbreak in the school. Boerne ISD opened with 80 percent of students back in class. Alamo Heights ISD quickly reached 65 percent, and other schools are bringing back more students each week.

They are following this aggressive strategy even though San Antonio does not have a reliable 24-hour testing turnaround at city-run sites, and no major Texas cities have contact tracing at the level recommended by the Association of State and Territorial Health Officials, based on the positivity rate of COVID-19 in the community.

Officially, San Antonio took a brief dip into the “green zone” in early October before jumping back up to “yellow.” Once in the green zone, steadily declining case numbers and a positive rate below 5 percent will indicate that it is safe for schools to bring back up to 50 percent of students, according to Metro Health. New York, by contrast, recently scaled back school reopening in parts of the city where the positivity rate hit 3 percent.

“How do you, from a public health perspective, balance the need to be a good citizen and not spread the disease, and at the same time give kids an education?” Greendyke said. “The fact that you’re seeing so many different practices across the country speaks to the fact that there’s no one right answer.”

While most of the focus has been on mitigation strategies like social distancing, masks, handwashing and shields, experts say when the inevitable case shows up, effective contact tracing could mean the difference between a single case and an outbreak.

Currently, most public school districts in San Antonio are relying on Metro Health to help them determine the appropriate contact tracing protocols and to execute them, despite the city’s rocky summer, when a local surge outpaced what contact tracers could manage. Metro Health is adding more contact tracers, but experts, including the CDC, advise congregate settings like schools merit more attention.

Schools will rely on campus nurses and health services staff to handle most of the case investigation and guide contact tracing efforts, in addition to their other duties. Nurses will report back to district central offices, which will report to Metro Health for guidance.

At each level decisions must be made about who should be contacted, what questions should be asked, and whether quarantine should be recommended. For instance, while close contact is technically anyone within 6 feet for more than 15 minutes, some subjectivity is allowed depending on whether the people were wearing masks.

Some districts, particularly those in the small towns surrounding San Antonio, are not contact tracing if both parties were wearing masks. Other districts take masks into consideration, but may still consider two masked individuals to be in “close contact” if they were within six feet of one another for long enough. In some districts, not every student in the classroom would be notified if a positive case of COVID-19 were identified among their classmates. In other districts, the entire classroom would be notified. In some private schools, parents are notified when a case is under investigation. In others, the school waits to confirm a positive test result.

Looking at what San Antonio had available through Metro Health “you couldn’t predict at any time whether those resources were going to be there,” said Head of School Len Miller, referring to the contact tracing delays.

He decided to increase his in-house contact tracing, and follow a more comprehensive protocol than Metro Health.

Before the pandemic Saint Mary’s Hall had two nurses for its 800 students, one full time and one part time. Both only worked during the school year. The school expanded both contracts. The full time nurse became a year-round staff member, giving her the full summer to work with the school’s leadership; Health, Wellness and Safety Continuity Committee; Medical Advisory Team, and communications team to hone their COVID-19 protocols. The part time nurse is now full time during the school year.

These are duties added to their responsibilities, Miller admitted, but staff readily volunteered for various tasks and committees.

The school’s Health, Wellness, and Safety Reopening Taskforce, faculty, staff, and parents, some of whom are physicians decided that Saint Mary’s Hall will trace contacts and investigate cases more thoroughly than Metro Health does. They have hired Rohr-Allegrini to consult with them and provide guidance as they make decisions.

At Saint Mary’s Hall, the facilities, course offerings, and average class size are what one would expect of a school where tuition and fees go up to $28,000 per year. But Miller said that feeling safe at school should not be a matter of resources.

He acknowledges that the expertise and time put into the Saint Mary’s Hall plan may not be measured in dollars, but they are still resources. That’s why he’s willing to share the school’s plans with any school leader—public or private—looking for ideas. Most of them, he said, can be done with an emphasis on process rather than purchasing.

“While we are making some investments, our biggest asset has been our teamwork and recommendations from our task force,” Miller said.

Like other public school districts, Somerset ISD will also use Metro Health for contact tracing among its staff and 4,150 students, but with their universal screening, known as “assurance testing,” the risk of missing someone significantly lower. If Metro Health gets backed up, or a student is exposed to someone who does not meet their criteria for contact tracing, the student, and everyone on campus they may have exposed in the meantime, will still be screened within a week of exposure.

“Next to a vaccine, this is, to me, the best method,” said Somerset Superintendent Saul Hinojosa. It’s the method being used by the NBA and some airlines.

In addition to actually preventing outbreaks, he said, he likes the reassurance the extra measures give to parents, most of whom were hesitant to return in person. In Somerset, where 83 percent of students qualify for free and reduced lunch, Hinojosa said, less than half had said they wanted to come back for in person learning. If they felt more confident in the district, he reasoned, maybe they would be more willing to come back.

“Students learn best when they’re in front of a teacher,” he said. With a little help, he’s going the extra mile to make sure they feel safe doing so.

Miami Data Could Offer Dire Warning of ‘Unfinished Learning’ Nationwide, With 54% of District Students Testing Below Grade Level in Math