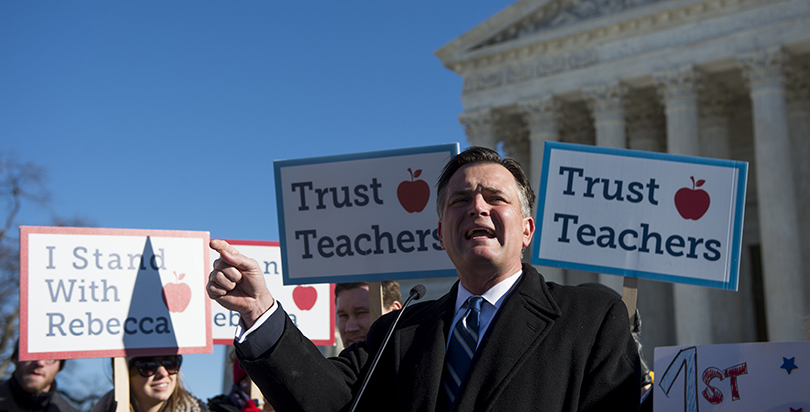 “I think it’s time to plant a flag here in Washington, D.C., in the same way that we have planted flags in other states around America. I’m not telling you that I know this is going to happen in six weeks or six months, but there is an opportunity” for a new federal choice program, the Indiana Republican said.

The selection of Betsy DeVos, a longtime school choice advocate, is an “enormous signal” of Trump’s and Republicans’ commitment to the issue, Messer said at a panel on new options for federal school choice, hosted by the Hoover Institution, a conservative think tank.

He also echoed Senate education committee chairman Lamar Alexander’s opening statement at DeVos’s confirmation hearing Tuesday night, that despite opponents’ characterization, her beliefs “are in the mainstream, and the folks that are criticizing her are the folks that are out of step with where most Americans are on these issues.”

(The 74: GOP Education Priorities: 13 Stalled House and Senate Bills That Could Now Make It to President Trump’s Desk)

Any federal money going to private schools raises thorny issues about civil rights and access — would the schools, for instance, have to abide by the Individuals with Disabilities Education Act, an issue that came up at DeVos’s hearing? What about LGBT students’ access to religious schools? Would faith-based schools be prohibited from teaching religion?

Those civil rights questions have been one of advocates’ and Democrats’ biggest concerns with DeVos’s nomination. A coalition of civil rights groups held a call Tuesday to highlight their opposition, and Senate Democrats during the confirmation hearing questioned whether she would require private schools receiving federal funds, to, say, report instances of bullying and harassment.

Panelists at Wednesday’s session, however, saw opportunity in DeVos’s nomination and discussed three ideas for expanding school choice programs at the federal level: a competitive grant program to help with startup costs for new private options; allowing the funds in the anti-poverty Title I program to “follow” children through schools via parent-directed accounts; and changes to the federal tax code.

Smarick envisioned it as similar to the federal charter school program, which helps charter operators with facilities and other costs they incur before they start receiving students and the per-pupil funding that goes with them.

Short-term grants and deference to state policies should assuage concerns about federal intrusion, and Smarick also suggested adding what he called the “Lamar Alexander rule” — putting limits and prohibitions on the department in the authorizing law, as Alexander did in the Every Student Succeeds Act, the new K-12 education law.

Joanne Weiss, who served as chief of staff in the Obama education department, said any such program should ensure families have access to and information on all options. Although some conservatives have proposed that a free market of parental choice is enough to ensure high-quality schools, Weiss argued that “families voting with their feet alone is not enough to ensure quality” and that more accountability is necessary.

• Title I Portability: McKenzie Snow, a policy analyst at the Foundation for Excellence in Education, proposed changing the Title I program so that it follows the low-income children it aims to help as they move among schools, including private options. The $15 billion currently spent each year now goes directly to public schools with high concentrations of poor students.

Conversations about Title I portability often start — and stop — with the premise that it’s simply too difficult to implement, a posture Snow called intellectually lazy.

“There’s a lot of creative solutions to make portability work, should states have the political will,” she said.

Specifically under her proposal, the threshold for eligibility would change from 185 percent of the poverty level, the figure most districts use, to 100 percent. Serving fewer children with the same amount of money would mean more money to provide additional services to children in need — about $1,400 per student versus about $600 now, she said.

That would mean more money per child, but serving fewer children is a political risk, moderator Mike Petrilli, president of the Thomas B. Fordham Institute, noted. It would also require changing the recently reauthorized Every Student Succeeds Act.

Snow proposed putting the money in an account for parents to direct toward private school, tutoring or other education expenses, with students’ eligibility judged through a form similar to the federal form used to determine financial aid for college. Under her proposal, states could opt into the program, and those that chose not to wouldn’t see a reduction in their federal aid or other penalty.

Critics of Title I portability say it will devastate funding to traditional public schools, still left to serve large numbers of high-needs students, and undermine the program’s aim of targeting large pockets of poverty.

• Tax Changes: Changing the tax code is likely the easiest to pass Congress, because it wouldn’t require new money like a competitive grant program, and it could be part of a larger tax code rewrite, a GOP priority.

Specifically, Congress could extend the existing 529 college savings accounts to K-12 expenses. That might limit its applicability to low-income kids, though there might be ways to help low-income families participate, said Virginia Gentles, senior policy advisor at the American Federation for Children, the school choice advocacy group founded by DeVos. She pointed to New York City, where Mayor Bill de Blasio started a pilot program to help low-income families save for college through 529s funded by both the government and a private nonprofit.

A more expansive option would be to create a federal tax credit for contributions to existing state scholarship-granting organizations. Under those, businesses or individuals donate to nonprofits that then award private school scholarships, usually to low-income children. The donor then receives a tax credit — essentially a refund — equivalent to their donation.

Congress would have to write the specifics, including whether residents of one state could donate to another state program if one doesn’t exist in their state, or whether there would be limits on how much a donor could claim per year. The law would probably also have to include a national cap so congressional committees could appropriately calculate the impact on the federal budget from the lost tax revenue, Gentles said.

Any regulations beyond that aren’t necessary, she argued. Most state laws require participating schools to meet basic standards, like health and safety regulations, financial solvency and staff background checks.

“There’s no need to add on an extra layer of federal regulations. I don’t think you’re going to want these existing scholarship-granting organizations and private schools to have to adhere to an additional level of regulation,” she said.