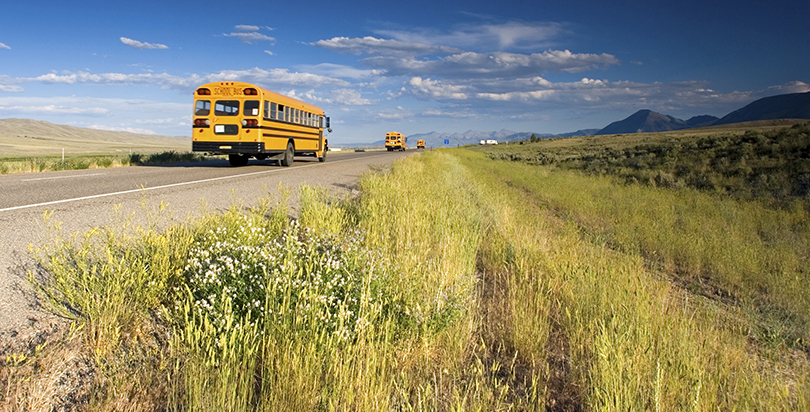 This is one in a series of articles profiling New Hampshire’s education system ahead of the August 19 NH Education Summit, hosted by The Seventy Four and sponsored by the American Federation for Children. Read the complete series here, and be sure to visit The74Million.org on Aug. 19 for live Summit coverage, featuring conversations with Jeb Bush, Chris Christie, Carly Fiorina, Bobby Jindal, John Kasich and Scott Walker. More info: EdSummits2015.org
The school in Croydon, New Hampshire, is small. Really small. Fewer than 100 students small.
Kids in public schools in Croydon (population 764) attend class in what amounts to a one-room school house at Croydon Village School from kindergarten through fourth grade.
For many years, Croydon, like other small districts in New Hampshire, had an exclusive agreement with a neighboring district to educate its older kids. But last year district leaders, with the backing of the town’s residents, gave students and their families an option: Take the local tax money that covers tuition in the neighboring district and use it instead at the school of their choice, a choice the state has said is illegal.
“The option is important, because one size does not fit all,” said Jody Underwood, president of the Croydon school board.
New Hampshire does have a very small private school choice program for students below a certain income threshold, funded by businesses that then receive tax credits. Only 40 students used the program in the 2013-14 year, and received scholarships of about $1,300 for private schools or homeschool expenses, according to the Friedman Foundation for Educational Choice.
About 20 other states have voucher or education savings accounts, and all but one are limited in some way, usually to children in failing schools or those from low-income families. Only Nevada, which recently made a splash when legislators created a statewide education savings account, has a program similar to Croydon’s in which all public school students, regardless of family income, are eligible.
Most Croydon kids still attend neighboring Newport Middle and High School. But last year, when the district began offering the option, five students used the program: One to attend another public school, one to a prep school and three to a Montessori school, the Manchester Union Leader reported.
The student at the prep school graduated, but some new families have expressed interest for the upcoming school year, Underwood said. In all, fewer than 10 students are likely to take advantage of the program this year. There are about 60 Croydon children in 5th through 12th grades, according to the Union Leader.
The arrangement under which Croydon operates, called a school administrative unit, is common in New Hampshire, where each city, town or village has its own district, even if it doesn’t have enough students to merit its own schools. Most agreements only involve secondary students, but some communities export all their children.
Neighboring Vermont, too, allows districts without their own schools to pay tuition to neighboring districts. There, though, state law allows parents to choose private (but not religious) schools.
In New Hampshire, the state Department of Education became aware of Croydon’s unique program this winter and tried to shut it down, saying it violated several state laws and regulations.
In a February letter, New Hampshire Education Commissioner Virginia Barry wrote to the Croydon superintendent that the practice of sending kids to private schools with taxpayer funds is “contrary to law.”
New Hampshire guarantees “that all public school children receive an adequate education,” Barry wrote. The state ensures this right through oversight visits from the state education department and annual assessments, neither of which private schools must participate in.
“By sending public school pupils to private institutions which are not accountable to the state under the statewide adequate education program, the district’s action threatens to undermine the public school accountability system in New Hampshire,” Barry wrote. “As a result, you may not send your public school students to a private school.”
She cited state laws pertaining to parents’ duty to send their children to school and existing laws governing when a child may attend a public school outside his home district in cases of “educational hardship.”
In another Union-Leader article, Underwood cited a different state law that allows districts to contract with “an academy, high school or other literary institution” located in New Hampshire or, when necessary, another state.
Talking to The Seventy Four, Underwood poked holes in the state’s stand on a guaranteed adequate, equitable education for every New Hampshire child. “A lot of kids fall through the cracks in public schools…in that sense they’re not providing an equitable education for everybody,” she said.
Croydon isn’t the only community interested in the private school option, Underwood said.
“At least two other school districts have called me asking about what we did and how we did it,” she said. Neither chose to go forward, “basically because the state told them they couldn’t.”
An attorney for the state education department said the department’s position on the use of public funds for private schools “has been clear to the community” and that districts may form agreements or use tuition contracts to send students to other public schools “to guarantee that their students are receiving an adequate education.”
Despite a volley of letters and a phone conversation between Barry and Croydon officials, including Underwood, there has been no resolution; the state and Croydon currently are at an impasse. The district is undeterred.
“Croydon is going to go forward paying private school tuition using our town’s tax dollars. We have the support of our town,” Underwood said.
Submit a Letter to the Editor
August 11, 2015