Through the Janus Looking Glass: What If Teachers Unions Respond to Lost Agency Fees by Refusing to Represent Non-Members? 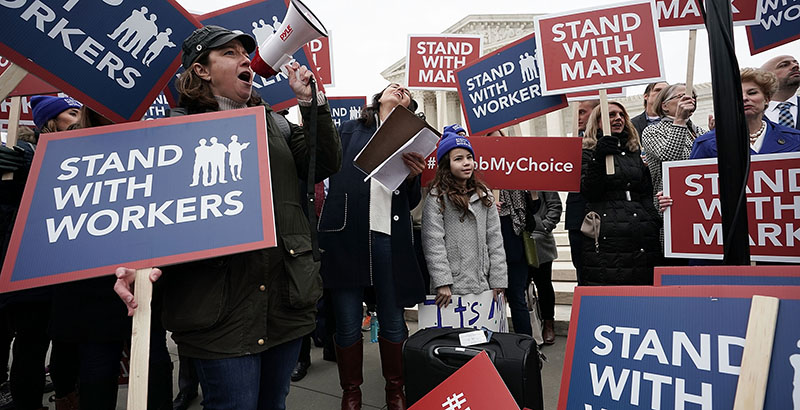 The United States Supreme Court heard oral arguments Monday in the case of Janus v. AFSCME, which will determine if public sector unions can continue to charge fees to non-members for representing them.

It is a First Amendment case, and much of the debate centered on whether and under what circumstances governments can restrict the free speech of their employees. The general principle is that governments must demonstrate an “overriding interest” that justifies the suppression of individual rights. For example, the Bill of Rights doesn’t prevent TSA agents from searching your carry-on without a warrant and taking away the handgun they find.

So what is the overriding government interest that requires non-members to financially support the union with exclusive bargaining rights at their workplace? Interestingly enough, all participants in the case seem to agree on the answer.

“You know, the state’s interest here, if I can spend just a few moments talking about that, is, first, we have an interest in dealing with a single spokesman for the — for the employees,” said David L. Franklin, solicitor general of Illinois, supporting the AFSCME side.

“So the labor peace interest, as this Court has explained in Abood, is the government’s interest in listening only to one union so it doesn’t have to listen to multiple unions,” said William L. Messenger, the attorney for Mark Janus.

Not being a constitutional attorney, I can’t puzzle out a solution that will satisfy the needs of all parties. The justices will decide if agency fees are an infringement on free speech. I have a different question: What makes “labor peace” or “one union” a sufficient justification?

Illinois Solicitor General Franklin made some remarkable claims regarding the state’s interest in seeing to it that its public-sector unions continued to receive agency fees. “[Agency fees] serve our managerial interests in two ways,” he said. “First, they allow us to avoid a situation where some employees bear the cost of representing others who contribute nothing. That kind of two-tiered workplace would be corrosive to our ability to cultivate collaboration, cohesion, good working relationships among our personnel. Second, independent of that, we have an interest at the end of the day in being able to work with a stable, responsible, independent counterparty that’s well-resourced enough that it can be a partner with us in the process of not only contract negotiation…­”

At this point Franklin was interrupted and was never able to complete his litany of how the government has an overriding interest in a “well-resourced” “counterparty.”

Presumably he would have also explained how the elimination of agency fees would be “corrosive to our ability to cultivate collaboration, cohesion, good working relationships among our personnel,” as if those conditions currently exist between the state and the public employees in Illinois.

It is certainly more convenient for public employers to negotiate with a single union, especially when those negotiations occur out of the public eye. That’s far from proof that it is in the public interest for them to do so, or that it is worth any restriction on the rights of individual employees.

In recent weeks voices from the left and the right have suggested Janus will backfire on union opponents. A pair of union locals in Wisconsin have already filed suit against Gov. Scott Walker, expecting an adverse Janus ruling and attempting to turn it to their advantage.

Their reasoning is that if the justices decide “that it violates the First Amendment right of a non-member to be compelled to pay fees to the union that is required by law to provide representation and services, it equally violates the rights of the union and its members to require them to use their money to speak on behalf of the non-member.”

It is true that a loss of agency fees will spark a series of imaginative legal strategies from unions, such as the unsuccessful attempt to claim it would be a violation of the Fifth Amendment’s takings clause. What they fail to realize is their “backfire” strategy may itself boomerang.

Should unions successfully argue that they cannot be compelled to represent non-members, the likely result would not be a return of agency fees, but an end to exclusive bargaining.

It would be ironic if the downfall of public-sector unions was not the Janus ruling, but a too-clever reaction to it.