Organized by the pro-charter group Families for Excellent Schools, educators urged their peers to step beyond their role as teachers and become advocates. The current goal: Expand the number of students served by charters from roughly 100,000 — about 10 percent of the city’s 1.1 million public school students — to 200,000 by 2020.

“It’s not enough for us to simply be great educators,” Success Academy Harlem Central Principal Kiah Hufane said to the crowd. “We need to come together, and we need to contact our elected officials. We need to be vocal on social media. We need to write letters and trek up to Albany.”

Over the loudspeaker, she encouraged the teachers to pull out their phones and text a number that would send an email directly to de Blasio, encouraging him to support charter schools. More than 1,000 of those emails were sent Wednesday, according to Families for Excellent Schools. 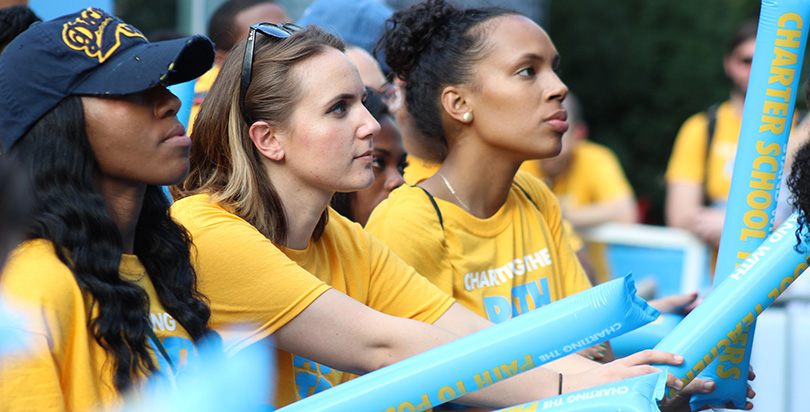 Charter school educators listen to speakers at a rally Wednesday afternoon to advocate for expanding the number of students served to 200,000 by 2020.
Photo: Kate Stringer

“On average, you make up to 1,300 decisions daily that impact student achievement, so who’s a better advocate for this movement than everybody that’s here today?” said Brandi Vardiman, principal of KIPP STAR, a Harlem middle school.

The mostly young teachers had already packed the square in lower Manhattan nearly an hour before the start of the 3:30 p.m. event. Teachers signed their names in black Sharpie to large yellow block letters that stood bordering the square, each representing the borough where their charter is based. They sponged paint onto their hands to leave a colorful print on a large banner wrapped around the center of the square and took social-minded selfies using a #PathToPossible geofilter on Snapchat.

At the #PathToPossible Teacher Rally having some fun with our snapchat filter – check it out if you're there! pic.twitter.com/tZZQfUQ4F4

An estimated 3,000 teachers attended, according to Families for Excellent Schools.

“I’m here to rally for my students because they need more schools,” said Brooklyn Success Academy teacher Lynette Fernandez. Her second-graders, she said, don’t have a nearby charter middle school option after they leave the elementary school. She said she’s seen her students grow, both in their behavior and in their studies. As a teacher, she said, she values the charter school for its supportive community.

First-year KIPP Star teacher Rafael Dejesus said the teachers’ presence was also a request for more funding for charter schools, which could provide things like better technology for their high-needs students and after-school activities.

”In New York City and [in the U.S.] the more charter schools we have, the more impact we can have,” Dejesus said.

Fresh on the minds of many speakers was the NAACP’s recent call for a moratorium on charter school growth.

“To think that an organization with the history of the NAACP would stand in the schoolhouse door and block thousands of children of color from getting a better education is disgusting,” Hufane said. 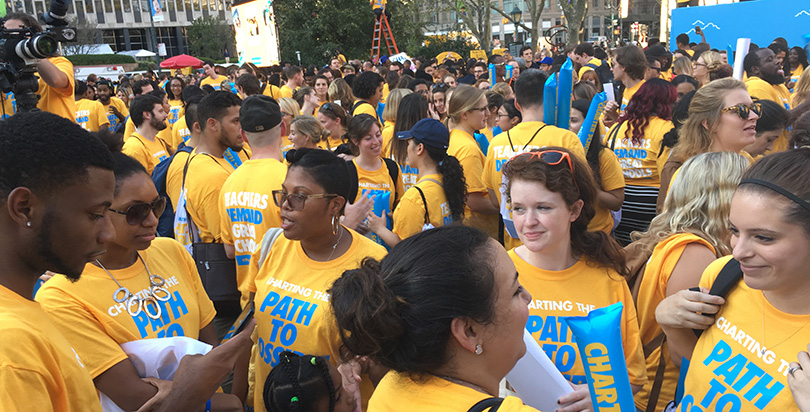 As with their discussion about the city administration’s resistance to charter schools, speakers pegged the NAACP vote as being funded by teachers unions. Most charter schools, which are publicly funded but have greater flexibility and control over how they operate, are not unionized.

“[The NAACP] is a once-great and historic organization, and I find it unfortunate that they are willing to sacrifice the freedom that charters present to families who have so little of it,” said Derrell Bradford, executive director of NYCAN and executive vice president of 50CAN, a network of education reform advocacy groups.

Educators gathered onstage at the rally for a panel discussion to talk about de Blasio’s resistance to charter schools. Charter supporters and the mayor have clashed politically in the past. He recently attributed charter schools’ strong standardized test performance to test preparation, a comment that didn’t go over well with the charter community. In a recent interview with WNYC radio host Brian Lehrer, he said his administration is focused on serving the 90 percent of students in traditional public schools.

“We’re committed to providing an excellent and equitable education for all students, whether at a district or charter school,” said city spokesman Austin Finan in an email. “We continue to work closely with the charter community, and in each of the past several years we’ve approved an increasing number of co-location requests, giving students and families more school options.” 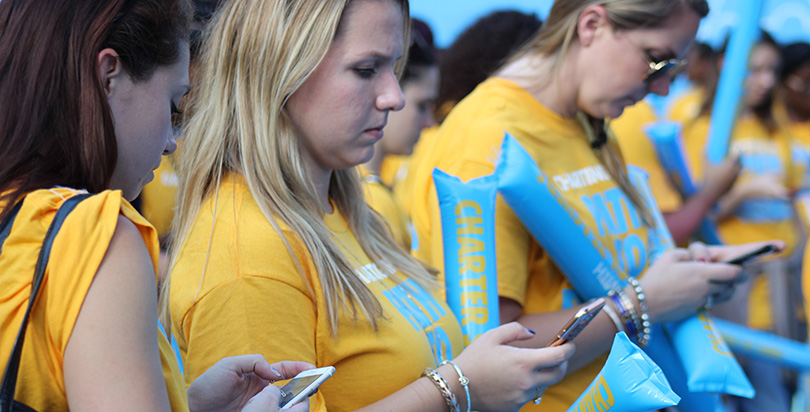 More than 1,000 teachers used their phones during Wednesday’s rally to send a mass email to Mayor Bill de Blasio asking for his support of charter schools.
Photo: Kate Stringer

Some 44,400 students are on wait lists for the city’s 212 charter schools, according to the NYC Charter School Center. Some students may be on more than one list. Charters in the city serve more minority and low-income students than their district peers, according to the National Alliance for Public Charter Schools, which reports that city charters in 2013–14 were composed of 94 percent minority students and 75 percent who qualified for free and reduced-price lunches. Charter students scored 5 to 8 percentage points higher than their district peers in state reading and math tests this year, which also showed some significant improvements for all New York City students, especially in English.

This is the second rally in nearly a month that Families for Excellent Schools has held to promote the expansion of charter schools. Also themed “Path to Possible,” the first rally drew a reported 25,000 families and students to Brooklyn’s Prospect Park, where rapper Common performed.

Speakers like Brooklyn Congressman Hakeem Jeffries, who has been mentioned as a possible opponent to de Blasio in 2017, and Bronx Borough President Ruben Diaz Jr. voiced their support for the schools, saying many are the only affordable, quality escape for families zoned into failing districts.

NYCAN Executive Director Derrell Bradford is a contributing writer to The 74.