Thousands of Miami Students Could Be Ousted From U.S. as Trump Ends Protections for Haitians 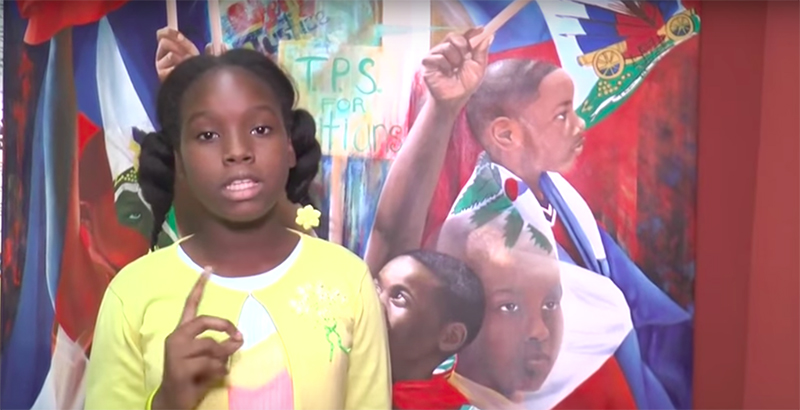 Ronyde Christina Ponthieux is begging President Donald Trump to reverse course on a decision that could upend her life. Born in the U.S. to Haitian refugee parents, she could soon be forced to move to a country she’s never known.

In a YouTube video, the 10-year-old fifth-grader at Miami Shores Elementary School took her message to the top, asking the president to make the “smart, economic, and humane decision” and let her parents stay.

Ronyde’s future has been in limbo since Acting Secretary of Homeland Security Elaine Duke announced last month that she was ending Temporary Protected Status for Haitians. The humanitarian program has granted refuge to 59,000 Haitians since the island nation was hit by a catastrophic earthquake in 2010 that left hundreds of thousands dead and displaced millions.

Now, Ronyde’s parents, like thousands of Haitians in the U.S. under the program, face a tough choice: Relocate with their children to a country still crippled by the natural disaster, or break up the family.

The government’s decision has upended the lives of thousands of students and created a climate of fear in Miami schools, said Alberto Carvalho, superintendent of Miami-Dade County Public Schools, who is himself an immigrant. The district enrolls nearly 12,000 children who were born in eight countries in the temporary status program. The largest group — 5,225 — are from Haiti. Additionally, Carvalho said, another 5,700 students enrolled in adult education in the district are from countries that benefit from temporary status. Nationally, about 30,000 children, like Ronyde, were born in the U.S. to Haitian refugees in the program.

Ronyde’s father, Rony Ponthieux, is optimistic about a legislative fix. But his daughter addressed her plea directly to Trump.

“If I were you, President Trump, I would put myself in the shoes of these parents with U.S.-born children,” she said in the video. “It is not hard to do, since you are the son of immigrants. You are also very smart, you married an immigrant woman, so I would empathize with them, feel for them, and understand how painful it must be to be forced to leave their children behind.”

During a press conference after the government announced it would end the program for Haiti, Carvalho condemned the decision and called on lawmakers to find a legislative solution. With him was Rep. Frederica Wilson, a South Florida Democrat who in October proposed legislation that would grant permanent resident status to protected status recipients who migrated to the U.S. before January 2011.

As he has often done since Trump took office in January, Carvalho also restated his response should immigration authorities show up at any of his schools: “Over my dead body.”

“I think we ought not think of this as anything short of crisis,” Carvalho told The 74. “How this will be solved over the next 18 months relies a lot on the strength of Congress to pass a long-term resolution that would address the reality that a lot of these folks have children who are U.S. citizens, and the breakup of family is not something that anyone should be able to accept.”

About 320,000 people from 10 nations benefit from Temporary Protected Status, nearly 200,000 of them from El Salvador. Haitians are the second-largest group of recipients.

When then–Homeland Security Secretary John Kelly renewed protections for Haitians in May, he offered a six-month extension with a warning: It was time, he said, “to start thinking about returning.”

That statement, and the shorter-than-normal extension, gave advocates a window to prepare, said immigration attorney Adonia Simpson, director of the Family Defense Program at Americans for Immigrant Justice.

“We were disappointed but not surprised by the decision,” she said. “We were sad to see it happen, but we did anticipate that, so, actually, for over six months now, we have been trying to target the Haitian community to see if they have other forms of relief” through options like family petitions or U-visas. Many families, she said, may choose to remain in the country illegally.

The Department of Homeland Security announced Nov. 20 that it would end protections for Haitians after determining that brutal conditions caused by the earthquake “no longer exist.” With a deadline of July 2019, the decision will “provide time for individuals with TPS to arrange for their departure or to seek an alternative lawful immigration status in the United States, if eligible. It will also provide time for Haiti to prepare for the return and reintegration of their citizens.” Those who do not leave the U.S. by the deadline could be deported.

Meanwhile, the State Department is encouraging Haitian parents to apply for passports for their U.S.-born children to document citizenship before they leave the country, an agency spokesperson said in a statement. “U.S. citizen children in Haiti will need to have sufficient documentation to meet local authorities’ requirements for access to education and local services,” the statement said.

Carvalho said his initial concern centers on student fear, which he said could affect attendance and academic performance. In the months ahead, however, he said the district could begin to see students leave.

“If you’re living with a fear of your parents being deported or yourself being apprehended, one would have to imagine that there’s a consequential emotional impact that would affect academic performance,” Carvalho said. “By the way, those are sort of the accounts that we’re getting from some students and their parents.”

Although Central Florida is a hub for protected status recipients from Haiti, other districts have also taken a stand. In Boston, Superintendent Tommy Chang said in a statement that the city’s children “are always welcome in our schools.”

“We will not retreat one inch from welcoming members of diverse, global communities into Boston,” he said.

Simpson said most Haitian parents she’s worked with hope to keep their families together. Her group has been hosting know-your-rights presentations and encouraging families to have difficult conversations about their future. But for Rony, it’s still unclear whether his daughter Ronyde will move back with him to Haiti should Congress fail to find a solution.

“This is my dilemma,” he said. “We do not know, but this is the reason we keep on fighting, so we don’t have to make a choice like that.”