Support The 74 and stories like this one. Donate Today!
News
Every Student Succeeds Act

This Week’s ESSA News: How to Make Sure Your State’s New Education Plan Does Well By English Learners

A recent paper from the Migration Policy Institute offers some very useful guidance for determining whether states’ plans for complying with the Every Student Succeeds Act meet federal requirements around accountability for English learners.

ESSA “mandates that states provide greater information to the public regarding English proficiency progress and academic achievement for English learners,” the paper says, and “encourages states to engage with a variety of community stakeholders during the development of these accountability plans.”

In other ESSA news, the Department of Education has approved Arizona’s plan, leaving only three states still awaiting approval: Colorado, Massachusetts, and Michigan.

The department highlighted Arizona’s decision to give elementary and middle schools credit (by way of additional points in its accountability system) for “accelerating student achievement” and to allow high schools to earn similar additional points for “preparing students to be college and career ready.”

Arizona recently received some criticism on a separate — but related — issue. Former representative John Kline, an ESSA co-author, questioned in a commentary for Education Week whether a new Arizona law, which would let schools choose which test to give students from grade 3 up beginning in the 2019–20 school year, is consistent with federal law.

Even more updates on key ESSA developments below:

What to think of California’s revised ESSA plan?

Bellwether Education Partners updated its interim review of California’s draft ESSA plan. Bellwether’s Chad Aldeman explained the “interim project was intended as a quick-turnaround, rapid-response analysis, and we did not use the full quality peer review process.” Bellwether and the Collaborative for Student Success were contacted with feedback from California policymakers who are working on the plan “about a few mistakes that were made in haste.” As a result, California’s review has been edited to correct these errors, and the state’s updated draft review — as well as a review of New York’s draft plan — is available on Bellwether’s website.

The Alaska Journal for Commerce reports that Alaskans’ last chance to comment on the state’s ESSA plan ends Sept. 15, “a month after Alaska’s education department published its draft plan for review.” The main changes from the previous draft are to “remove specific tables of points earned for each indicator.” Performance levels “will be identified for each indicator and point attribution tables will be used to assign points along the continuum of school performance for each indicator in the system.” The state will determine “business rules” and develop regulations to implement the accountability system through “a public comment process and adoption by the State Board of Education and Early Development.” 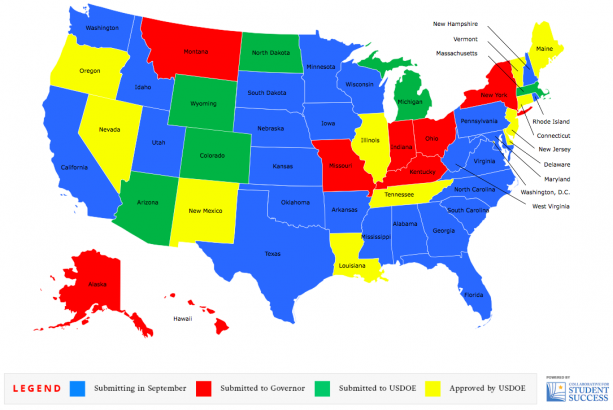 Arkansas readies its plan for submission

After more than a year of prep, Arkansas’s ESSA plan is “nearly ready for its Sept. 18 submission to the U.S. Department of Education.” Arkansas’s plan “calls for 80 percent of students to score at ‘ready’ or ‘exceeding’ ready levels on state exams” within a dozen years. It also proposes three-year “checkpoints” against which schools will gauge their progress toward goals such as student achievement and graduation rates. On accountability, Arkansas’s proposed system will account for academic growth — schools “will get credit for students who show improvement but remain below the ‘ready’ level on state tests and also for students who are above at ‘ready’ level on state tests but continue to improve.”

Schools will also be graded on progress made by English learners, and “high schools will be measured on their efforts to get to at least a 94 percent graduation rate or 97 percent for those who stick with high school for an extra fifth year.” Schools will be eligible for “credit for parts of their operation that have not always been recognized in past accountability plans,” such as attendance, college entrance exam scores, and achievement in science, as well as community service and AP participation.

A summary of AR's Consolidated Plan for the Every Student Succeeds Act (ESSA) is now available! Please go to https://t.co/2tRKn12I6P. pic.twitter.com/L0j9L72eKb

Mesecar and Soifer recognize that a “big improvement” in New Jersey’s accountability structure is a “focus on student growth over time, rather than point-in-time measures of student proficiency.” Going forward, New Jersey will be looking at “how all students taking the state assessment are progressing from year to year, regardless of the student’s starting point or if he or she has not yet achieved — or has far surpassed — grade level proficiency.”

Take a look at what independent peer reviewers thought of New Jersey’s plan.

Military Families for High Standards Chairwoman Christi Ham reminds us that “Given the average military-connected student moves six to nine times between kindergarten and graduating high school, many of the sons and daughters of U.S. service members get used to this role.” However, moving so often has “led to questions about the academic challenges these 1.2 million military-connected students face.” For the first time, Ham notes, under ESSA, “we have the opportunity to get answers to these questions, if states are willing to take the steps necessary to find them.”