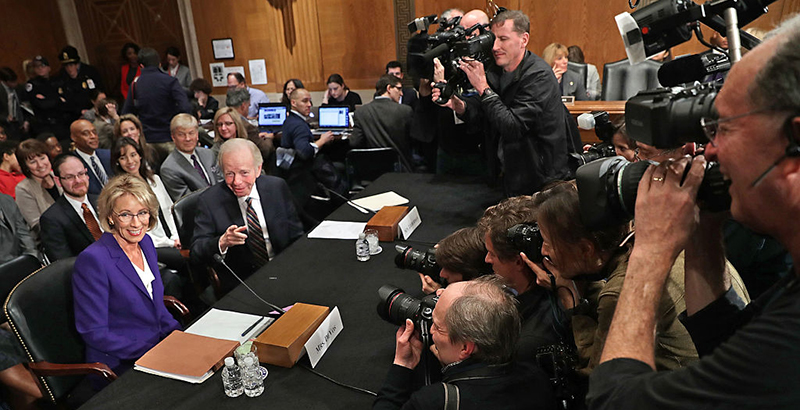 This week, Secretary of Education Betsy DeVos returned to Capitol Hill to appear before the House Education and the Workforce Committee and discuss her agency’s priorities. While members of Congress asked DeVos wide-ranging questions about everything from school safety to Pell Grants, one of the areas where she received the most pushback was ESSA — and the approval of state plans.

As CNN’s Juana Summers reports, DeVos “was pressed by Virginia Rep. Bobby Scott — the committee’s ranking Democrat — over whether she had approved state education plans that violate the law. Scott repeatedly pressed DeVos on plans where school grades don’t include subgroup performance, suggesting that allowed states to ignore disadvantaged groups.”

Secretary DeVos: “It is addressed as required by the law.”

DeVos: “Whatever the law states, it requires…”

Scott: “What does the law state?”

On May 16, DeVos announced that Alaska and Iowa had gained federal approval for their state ESSA plans. “I am pleased to approve these plans, which comply with the requirements of the law,” she said. “I encourage states to use their plans as a starting point, rather than a finish line, to improve outcomes for all students.” She noted some “unique elements” from each state’s plan, including Alaska’s goal to cut the number of non-proficient students by 50 percent in a decade, and Iowa’s plan to set “clear and rigorous standards” as well as have educators help students reach them through “high-quality instruction and evidence-based practices.”

Betsy DeVos has given the thumbs up to two more state Every Student Succeeds Act plans: Alaska and Iowa. https://t.co/7iTtBCRgHS pic.twitter.com/ZOLfVf5nW7

Kevin Mahnken reports here on The 74 on the findings of a new study from Education Next, which finds that “proficiency standards on state tests have grown more stringent over the past few years, defying worries that they would be dumbed down as the federal government took a more detached approach to school accountability” under ESSA. Overall, the study found that “43 states received a B-minus grade or better from Education Next on their standards, while 16 states and the District of Columbia earned either an A or an A-minus.” However, “only two states received a grade of B or better just nine years ago.”

Most states have adopted high standards and have stuck with them. But standards don’t exist in a vacuum—outside forces and relevant policy gaps should be factored into any analysis of impacts on academic outcomes and achievement. #EdNextStandards

Chiefs for Change and Results for America released a new report that examines how state chiefs are intensifying efforts to use data to better understand how different programs improve student achievement under ESSA. The report provides a guide for states and districts alike to help them navigate ESSA’s evidence provisions and identifies examples of how states are figuring out new and better ways to determine what is working (and what isn’t). The authors say their “aim is to provide a clear sense of the policies, practices, and conditions states can establish to build evidence and apply it in ways that can help solve problems and improve outcomes for students.”

Closing opportunity gaps for students will require more and better evidence about what works. A new Chiefs for Change and @Results4America report shares how states and districts can build evidence under #ESSA: https://t.co/yeI5LkGDW4 pic.twitter.com/i39QdxEdVh