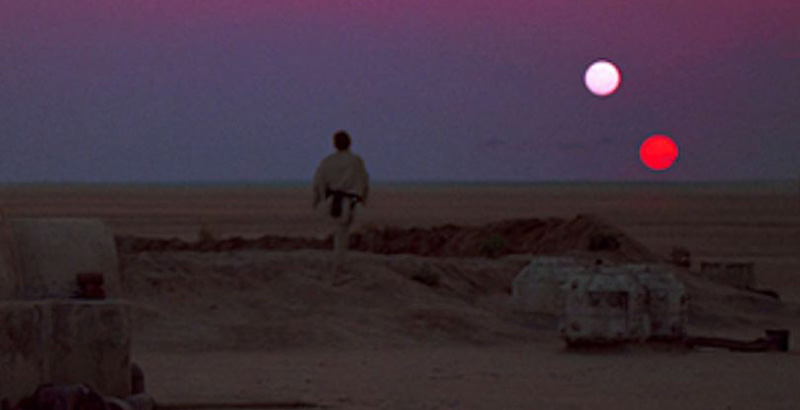 Astrophysicist-in-the-making Wolf Cukier is comfortable with high-level science, measuring distances in light years and observing planetary shifts. But occasionally, he lets his inner 17-year-old show through.

Ah, good ol’ Tatooine! Now we get it.

Wolf, a senior at Scarsdale High School in the suburbs of New York City, found a new planet on the third day of his summer internship at NASA’s Goddard Space Flight Center in Greenbelt, Maryland, NASA revealed earlier this month.

Wolf’s discovery of the massive planet, seven times the size of Earth, is most remarkable because it is the first found to orbit two stars instead of one, NASA said in a press release.

“His job was to examine variations in star brightness,” the release said. He was using the agency’s new Transiting Exoplanet Survey Satellite, known as TESS.

TESS, which is expanding our view of the universe, just happened to be pointed in the right direction when Wolf was assigned to study how two stars crossing paths would create an eclipse, he told CBS.

“The planet blocked the light from those two stars, leading to a dip in the amount of light that reached the telescope,” he said. “It was like, ‘Oh, there’s something here. That’s cool.’”

Besides his talent in science, Wolf seems to be a master of understatement.

“There are Ph.D. candidates who would die to have the kind of opportunity Wolf lucked into in this internship,” his mother, Beth, told the network.

At home, where Star Wars posters decorate his room, Wolf and his family are hoping his 15 minutes of fame stretches out to the universe. The planet he discovered is currently named TOI 1338 b, for the Tess Object of Interest telescope, but the Cukiers are hoping for a name change that writes Wolf into eternity, he said.

“My brother’s idea is ‘Wolftopia,’” he told NBC.