‘This Isn’t a Pity Party:’ How One NYC High School Is Helping At-Risk Kids Become Champions 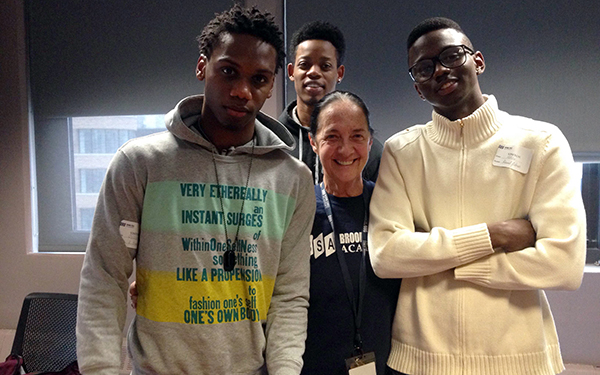 Principal Barbara McKeon with (from left to right) Kareem Brown,19, Lyndon Villaroel, 20, and David Palmer, 19.
Throughout the afternoon, students continually knocked on her door to check in before the weekend and ask for their phones — confiscated during the day for being in use when they shouldn’t be. McKeon is easy and familiar with each of them, asking one if he managed to be on time to class (he had) and suggesting to another that he wash his sweatshirt before he wears it again (it smelled like marijuana).
Despite the success of the Champion Model, there is still work to be done, McKeon acknowledges.
“Do we have problems? Of course we do, we have teenagers,” she says.
But McKeon prides herself on being “the champion of the underdog,” and credits her own upbringing for allowing her to connect with the student body. She grew up in Jersey City “before it was Jersey City,” she says, recalling the pre-gentrification neighborhood violence, and was the only one of her five siblings who went past high school. She now has her doctorate.
“Every kid has trauma in their life,” McKeon said, “But this isn’t a pity party and we hold them to high standards.”